Flushing getting another hotel 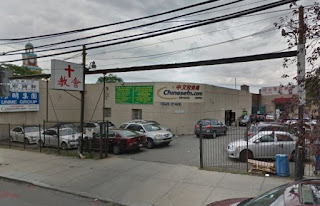 Plans were filed last week for a 19-story mixed use building in Flushing that will consist of 146 apartments and 360 hotel rooms.

The development is planned to go up at 133-25 37th Ave., just five blocks from the Flushing subway station.

The building will be 198-feet tall, with floors two through seven each consisting of 60 hotel rooms. The apartments will be located on floors eight through 19.

There will be 2,270 square feet of space dedicated for a medical facility and a first floor hotel party room.

The building will have separate lobbies for hotel guests and apartment dwellers. There will be indoor parking for 198 vehicles, with storage space for 82 bicycles.
Posted by Queens Crapper at 12:12 AM

The photo tells a lot of the story. Another area of Queens turned into a trashy looking slum by the Chinese. Who would build a hotel in such a disgusting looking area? Only someone looking to operate a hot sheets motel--a speciality of the Chinese---which will then turn into yet another homeless shelter, netting big bucks from the city. Soon all of Queens will look like a Shanghai slum.

It will probably turn into a homeless shelter soon.

New hotels to go with the upgrading of LaGuardia, possible light rail, and easy subway access to NYC.

I see the eventual goal. A conference/tourist/business destination hub.

Like Times Square, if you bring in the higher class of business and tourist dollars the competition and police will drive out the riff raff.

Flushing with be the next gentrified neighborhood.

Maybe not a bad idea.

I rather stay in a hotel in flushing (at least the better ones) than one in the area around LGA. They are crap and have become shelters.

Why don't they call these hotels what they truly are? Homeless Shelters. Lots of money to be made. Politicians don't care about their constituents anymore. They only care about the money they will make with their developer friends. Disgusting.

Yes - I agree with the last post. Flushing will be the next gentrified neighborhood.
It's started already. Wherever the zoning restrictions are soften you will get lots of development and money to kick the riff raff out.

Well, the medical facility will come in handy in case anyone gets injured in the party rooms

>with storage space for 82 bicycles.

Who bikes to a hotel? If you're close enough to bike you can stay at home.

How will Flushing be "the next gentrified neighborhood" with the large influx of slum-class Chinese who want nothing more than to recreate the cheek-to-jowl dirty slum they just left behind? Take another look at that photo. That's what College Point Blvd., once a very pretty stretch of road, is turning into. All you see now is dirty industrial stuff and dirty little side streets. And heaven help us, there are about 6 humongous apartment buildings being built between Main Street and College Point Blvd. right now, undoubtedly to house more Chinese stuffed 6-to-a-1-bedroom-apartment. When you see laundry strung up in windows to dry, a bunch of unsightly junk piled high on terraces, cigarette butts all over the ground, etc., you are NOT talking about "gentrification"---you are talking about another Chinese slum.

Well, downtown flushing has changed dramatically over the past 20 years. For the better!

you are NOT talking about "gentrification"---you are talking about another Chinese slum.
....
Same about Western Queens - no "gentrification" when you have fraternity row of one gin mill after another - even if they have 'trivia night', cheaply built towers run by surly Greeks that don't believe in repairs, and a population of finicky hipsters that have no connection to the neighborhood.

And how long will the families stay in LIC when the first flood hits with toxic waste and the overbuilt apartments are sub-let to the first wave 3rd world families. A 'Democrat' is always someone who can raise their kids in a different neighborhood than the nanny.

No Way !! Too much traffic in Flushing now. It is near grid lock with all the traffic, and buses have a difficult enough time getting to stops, let alone termination/origination stops. Adding more people and traffic will do this area no good what-so-ever. Besides all the traffic the shopping stinks. I have no reason to go to any of the stores in Flushing - just a bunch of junk/trash. Even Macy's has gone trashy. I stopped in Macy's to use the bathroom (only thing its good for) when I got off the subway and when I entered the store some kid was wreaking havoc on a scooter - WTF - its a department store not a playground ! Not 1 salesperson , not even the security guard had anything to say about it, like it was normal. Flushing is not for normal civilized people.

Flushing already has a number of hotels for legitimate intl'l travelers from Asia. It's quite suburb-y especially along the Northern blvd corridor. The Koreans have done well for themselves there. If the intentions underlying this development suspect, it will be the home-and-business owners of that particular group that speak out first and loudest, in interest of their property values and livelihoods. A recent spate of new hotel buildings along Prince, Main etc appear from my looky-looing to be just that: hotels (I've been to the sorta-nice rooftop bar of at least one).

Its now a modest priced tourist destination for city night life, good times, food, shopping as well as a annex hotel and conference room space for LGA airport.
Hipsters have been packing the area between 108-111th streets with live music, Karaoke, happy hours and such. Some kind of CPD oil and vape shop is opening.
--Its changing drastically, affordable rooms are in demand AirBNB and private guestroom rates have doubled, near tripled this summer.
The place is becoming some kind of Manhattan East Village Part II

Hate to tell you but hipsters often are young and apparently need to be trained to clean up after their dogs. I find dog crap everywhere. Sometimes it’s not the young hipster but lazy dog owners that love to dump their dog crap in my trash cans. They can’t be bothered to go to the end of the block to throw it in the city trash cans. There’s cigarette butts and Kleenex strewn all over. People are gross.

Flushing has some nice places like the Paris Baquette shop.

Macy’s in Flushing is and was always a mess. Why blame the store employees? First it’s the parents lack of proper parenting skills.

College Pt? Flushing was always a run down place until Asians came in. It’s not their fault they don’t live in the upper east side or Park Avenue where for the most part apparently rich nabes are kept clean. Go to parts of a Jersey. Some nice nabes are spotless with sanitation taking away anything left out there. Here, if Sanitation gets tons of furniture, it seems sometimes they will leave thing behind. Don’t blame them when idiots drivers behind them honk them to death.

Even some parts of western lower Manhattan is beautiful but some blocks are run down and sewage is awful,and it stinks like human feces during the summer.

More illegal money coming in from China. What the US doesn’t know or care is the way the money was earned. They also use these projects as a vehicle to get visas via the EB-5. They sell $500k worth of the project to each visa applicant. The developer sells out and gets cheap money. This is being done all over Queens.

Who writes this stuff - Flushing is a stinking crowded Chinese ghetto.

When you see what it was 25 years ago and what it is today you weep - thanks Dems.

Do you mean ALL of Flushing is a stinking crowded Chinese ghetto or only certain parts? Everywhere I look, neighborhoods where you never saw Chinese before now have large populations of them---Fresh Meadows, Forest Hills, College Point, Jamaica Estates, Kew Gardens Hills, etc. You never used to see, even a couple of years ago, any Chinese walking around on the street. Now, every other person seen walking down the street is Chinese. Does anyone have any bets as to when the above neighborhoods will be basically Chinese, with other groups having moved out in disgust?

And can anyone tell me how Chinese fresh off the boat can possibly afford to buy co-ops and private homes for cash , not needing a mortgage?