Chon gets away with it 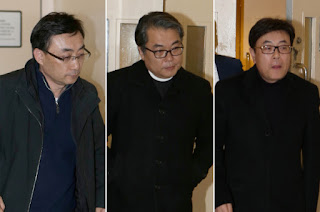 One of the honchos of Spa Castle pleaded guilty Thursday to attempted tax fraud charges, while the notorious Queens bathhouse agreed to pay $2.5 million for cheating the system by under-reporting income.

Daniel Chon was sentenced to a three-year conditional discharge — and no jail time — after copping to felony attempted criminal tax fraud charges.

The College Point spa mecca, meanwhile, was convicted of criminal tax fraud charges and agreed to pay the millions in restitution and damages as part of a simultaneous civil action.

The state Attorney General’s Office brought a slew of indictment charges against Spa Castle, Chon and several members of his family last year, claiming they failed to pay $1.5 million in taxes by under-reporting revenue.

Weinstein noted, however, that Chon pleaded guilty to just one count related to attempting to not remit sales tax “in excess of $10,000.”

The cases against Chon’s siblings — Victor Chon, Stephanie Chon and Spa Castle owner Steve Chon — were all dismissed with prejudice, according to Weinstein.

“We have zero tolerance for tax cheats who leave New Yorkers to foot the bill,” Attorney General Barbara Underwood said in announcing the pleas. “The defendants orchestrated a multi-million dollar scheme to defraud taxpayers.”

Wow, this is zero tolerance?
Posted by Queens Crapper at 12:41 AM

And yet people still say we have the best legal system in the world.

off topic but check this out crappy
https://www.nytimes.com/2018/08/24/nyregion/queens-candidates-nominated-without-knowing.html

No jail time?? What a joke this city is.

When is prejudice not only acceptable, but even rewarding (for some)?

When charges are dismissed "with prejudice".

He must be laughing his ass off. In other words, it's ok to steal taxpayer money and run a brothel just so long as you're an immigrant.

He must be laughing his ass off. In other words, it's ok to steal taxpayer money and run a brothel just so long as you're an immigrant.

AND make substantial donations to the fascist Queens Democratic Party. Remember Queens attracts third world because it IS Third World.

Spa castle is not a brothel.
And he didn’t get away without jail time because he was an immigrant .You made those conclusions because you wanted to insult immigrants .

No, it is definitely not a brothel. Despite the shady tax shenanigans of this family, the place is run quite well. It's clean, has good food and offers great services such as Korean body scrubs and amazing shiatsu massage. It's a nice place to spend a few hours. I've been going for 10 years now.

Imagine these men were White conservatives.

It must be great to be part of the protected class.

Do you expect Mayor deBlasio or the Queens DA to go after these people? Not in a million years.

The Southern District of New York has no problem going after the Trump Organization and Michael Cohen.

The lesson here is; you can get away with anything as long as you are a liberal, a minority or a political donor.

The days of “Boss” Tweed and Tamminy Hall are back...

"No, it is definitely not a brothel. Despite the shady tax shenanigans of this family, the place is run quite well"

except for when the dead bodies float in the pool right?

this place has been a blight on the neighborhood since the day it was built. College Point was never a paradise, but the crime and slime this "mecca" brought with it is disgusting.

you people are pathetic for defending a lying, cheating criminal.

I don't know what 'crime and slime' you are referring to. Go there at any time and you will see middle/upper middle class people going there with friends, their children, their spouse, etc for a day of relaxation. The place is not cheap by any means ($50 admission, not including any food, drinks, services) so you are not getting bottom of the barrel scum people going there. The person who died a couple of years ago was a gentleman around 80 or so who was found in one of the hot tubs. That could happen anywhere. Any time places have hot tubs there's always clear signage advising not to use if you're pregnant, have heart trouble, etc. and Spa Castle has these signs so the dead guy argument carries no weight.