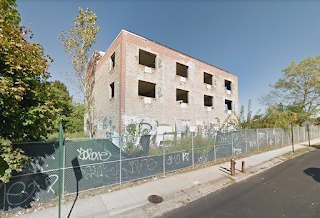 More details have emerged about the affordable housing facility for seniors coming to Glendale after the permits for the project have been filed through the Department of Buildings (DOB).

The permits filed on Aug. 3 reveal that the structure to be built at 80-97 Cypress Ave. will rise to 57 feet tall with 45,420 square feet of residential space. The six-story building will contain the previously reported 66 living units as well as a parking lot with 19 spaces, records show.

Ah, We're familiar with this particular pile of crap. Ten years ago, it was featured on this blog. Whatever happened to Mr. Angry?

Formerly known as PSCH, Inc. until a rebranding in 2017, the WellLife Network has owned the site since 2004, according to city records. The building currently on the lot, widely regarded as an eyesore in the community, was never completed because the previous contractor used bad materials that were porous and caused the building to flood every time it rained, Scott said.

The Department of Buildings (DOB) eventually issued a stop work order on the project, and WellLife Network has been formulating a new plan since then.

According to Scott, the old structure will be demolished to make way for the new building, but there is no timetable yet.

The often forgotten building on Cypress Avenue regained attention this year after the Department of Homeless Services (DHS) issued a request for community boards and elected officials to recommend possible homeless shelter sites. Not knowing the current status of the site, Councilman Robert Holden suggested the Cypress Avenue building be used as a homeless shelter, he said.
Posted by Queens Crapper at 12:06 AM

And five of the lucky residents of the apartments will be lucky enough to store their bicycles in the basement!
Seniors on bikes?
Lucky the cemetery is right next door.

Senior housing with a twist. A portion of it will serve homeless adult men. You know what that means !!

Why not "luxury" housing?
Isn't everything "luxury" these days?
Build crap. Scalp rents! "Luxury" being an excuse for the overcharge!

An old folks home conveniently located next to a cemetery!

This is one of the highest points in the entire city, it's on the same hill as the Ridgewood Reservoir and Highland Park.
How the hell did the old contractor turn this building into a water basin?

I remember that vacant building as far back as 1987, the lion from The Wizard of Oz and his family is buried about 100 feet North East of that structure about 20 graves in from the fence on the left. In the late 70s It was a dead end were we hung out and had Keg party's with the Boogiemen crew. Between those guys and the Merkel family with the guns, knives and pig roasts it was the safest street in Glendale.
--Ah the good old days