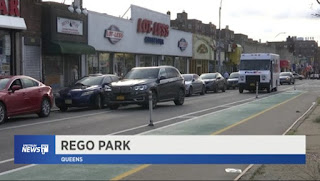 Taehong Lee says business at her market fell more than 30 percent after the bike lanes opened. Even more upsetting, she says, is that cyclists rarely use the lanes.

"I don't really see people bike the area, in this dangerous road," the business owner said.

It's a complaint NY1 heard from almost every store on this strip. So, we decided to see for ourselves.

The lack of cyclists, along with complaints from businesses, is a major reason why the local community board voted down a proposed extension of the lanes from Yellowstone Parkway to Union Turnpike.

Still, the city transportation department is moving ahead with the project, which will wipe out another 200 parking spaces. Now, business owners along that stretch of the boulevard are worried.
Posted by Queens Crapper at 12:16 AM

Measuring the usage is necessary, but to be statistically useful , the count has to be done for weeks and over the entire day.

Christ, Look where that mail truck is parked, over the median and on that whatever the hell that sandy shit is supposed to be. About that part of the bike, the city devoted more space to that than the painted bike lane. Which shows how stupid the D.O.T. is thinking that people will used that for walking on it instead of the sidewalk that exists.

As a cyclist who has been using this for commuting all summer, in the last 4 days, I have seen barely a dozen bikers, and most of them are riding those motored bicycles. And I have seen three motherfuckers riding scooters without license plates (all of whom I confronted did not speak English and laughed at me when I instructed them to get plates, but did get nervous when I mentioned cops and ICE).

It should be clear why this bike lane exists, it's engineered to kill businesses along the blvd and frustrated driving commuters. This policy and infrastructure is being goaded by the predatory developers sending their lobbyists to get them done and fuckall to the communities and commuters. Bike lanes are a big part of the Gentrification Industrial Complex's itinerary to transform neighborhoods into transient residencies.

Just put the damn bike lanes flush to the median curb and keep the parking Which would act as a Protective barrier. It's being done all over the city. Why not here? Oh. Get rid of the ped walk lane. It's a waste of space. People do Not use it!

Why must businesses suffer for DOT's incompetency? Where are the real engineers who can figure this out safely and fairly for everyone ?

And yet, if you look at streetsblog, the bike zealots say that the counter is inaccurate.They refuse to believe what we have all seen for months...the lane is rarely used. Count the # of cars on the road vs the # of bikes in the lane. It's not even a close comparison.

Biking out at Jones Beach is nice. Biking on pollution filled QB, not so nice. The Belt Parkway bike path is better than this.

"Measuring the usage is necessary, but to be statistically useful , the count has to be done for weeks and over the entire day."

Data schmayta. I ride during the work and home commutes, which should be the busiest times of the day. The lanes are deserted. So deserted that illegal motorcycle driving is occurring.

This corrupt stupid mayor and that dumb harpie running the DOT are under the delusion that citizens will ride over 10 miles a day to work and back, despite the seasons and inclement weather. I think this is the city's contribution to the subway by hoping people will ride bikes instead of take the train as it will be in utter chaos when the canarsie tunnel shuts down.

I'm a cyclist and I avoid traffic areas. In fact, I always dismount at busy intersections.

You don't understand...the bike lane Nazis are the hipster yuppie elite. They're the ones running the show.. we're being pushed out folks

Ben wanted to blame the bikes but truth was his food was getting too expensive. I used to shop on the the 63rd grocery place mentioned in the article. It's...fine, certainly better than your standard bodega but now Aldi is providing some semi-serious competition. 63rd two blocks south from the boulevard could hardly more different from the QB, as well as strets like Alderton, Booth, Wetherole, etc - all very quiet, low-rise (at least away from the blvd) and residential. Nobody there is biking, even though in a sense those streets are far more suited for it.

And, that maniacal plan of anarchy is the reason for why the LAST kosher delicatessen in Queens County that has been run for 48 years by the family of Jay Parker (Ben's Best), closed on Saturday, June 30, 2018, leaving an even deeper void of good outlets that are marginally preferable to HUNGER.

Thank goodness I summer on the East End (i.e., East Hampton, Sag Harbor, Water Mill, Bridgehampton), which, in another coupla years will look exactly like Queens County - the official gateway to 'The Fourth World' (currently in mid level progress in hyper-corrupt Hamptons terrain - destruction COMPLEMENTS of the 1%)!

DUH !! WHY IS ANYONE SURPRISED.

The mayor won't be satisfied until every business on Queens Blvd is shut down and every storefront shuttered.

The car hating cult WANTS to make driving as difficult and onerous as possible. They are indifferent and contemptuous to the reality of millions of New Yorkers in the outerboroughs who depend on driving to take their kids to soccer, baseball and music classes, after-school and weekend programs, to go shopping and go to church or temple or mosque, and to go work. Not everyone can get to their jobs through public transport. If a person lives in eastern Bronx and works in Little Neck or Jamaica, or Staten Island, he or she HAS TO DRIVE TO WORK.

Even with the new bike lanes, it's still very dangerous for bikers. QBlvd is just not tje right place for one. Bike elsewhere. Stay away from QBlvd. My family would not dare go near it.

How socialist. Ration the parking(eliminate 200 spaces), and raise the price to park.

Wow, in their argument against the bike lane, the business owner called it a "dangerous road."
That sounds like a good argument FOR the bike lane.

Who is going to bike 24 miles roundtrip into Manhattan and then have to contend with the massive traffic chaos on that sinking island ? In 100 degree weather? In 10 below zero with snow and ice ? Who in their right mind?!!

The good of the few over the needs of the many. NYC blows...

My advice! Move to smaller towns that can't afford to waste their money on outrageous nonsense like this. All large and medium size towns are already on board with this useless waste of taxpayers money.

Never would I have guessed that there would have been a direct crisis (and correlation) between Queens County and East Hampton——but, there it is: Beggary, obscurity, over development, Third Worldism, clutter, quiet desperation, disparity, noise and sight pollution, and diminished standards of living and quality of life that has now decimated Queens——and, right alongside of it is the East End, and the 1% who have not only polluted those once pristine hamlets, not to mention Georgica Pond, with their pesticides, but whose CLASS WARFARE, CLASSISM and the autocracy's refusal to hire local teenagers at the most expensive shops and restaurants in town (preferring to hire illegals and transients from impoverished countries worldwide), is what has all but destroyed the charm, quaintness and beauty of the Hamptons that with each passing day looks a little more like Queens County on a good day (don't ask about the majority of bad ones)!

I like those bike lanes; I've used them and I'm glad they're there. Too much of Queens has been turned over to drivers who are a minority in this city. Most of us walk, bike, and use mass transit. Also, this area of QB is calmer since the installation of bike lanes and there are fewer cars speeding recklessly and killing bikers & pedestrians.

Since you cling to your own anecdotal evidence like white on rice, maybe you should admit the fact that the majority of QUEENS households own cars. And that's not going to change anytime soon.

>this area of QB is calmer

"calm" is an absurd euphemism for slow traffic. The Mayor and his ilk won't be satisfied until traffic is so "calm" that it doesn't move at all.

I'm an avid cyclist but these lanes are a terrible idea. We need more parking spots and faster traffic, not bike lanes in already congested areas.