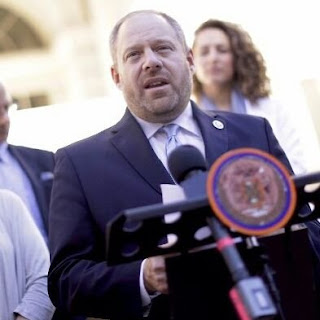 Although his candidacy has not yet been declared, City Councilman Rory Lancman (D-Hillcrest) is eying a run for Queens district attorney -- a title that has been held by 86-year-old Richard Brown since 1991.

Lancman, who represents Fresh Meadows, Jamaica and parts of eastern Queens, said his platform in the potential race for DA would be reshaping the criminal justice system.

“We need significant criminal justice reform here in New York City, and that includes Queens,” said Lancman, who is the chairman of the City Council’s Justice System Committee, which has jurisdiction over the city’s five DA offices, the Office of the Special Narcotics Prosecutor and the Mayor’s Office of Criminal Justice.

Lancman said that as of July 16, he has more than $793,000 combined from three separate campaign finance funds in his coffers.

The lawmaker has been an advocate of pushing for cash bail reform, decriminalizing low-level offenses like smoking marijuana in public, turnstile jumping, and protecting workers’ safety and wages.
Posted by Queens Crapper at 12:21 AM

all criminals in Queens support his run

If it's a choice between him, Melina Katz, and Richard Brown, I think I'd vote for Rory. But let's wait and see who else decides to run - it's still early.

I called his office about a homeless issue, his staffer clearly said he was instructed to tell us the councilman will do "nothing" about that issue and will not get involved. Couldnt even get through to the councilman himself to complain about the issue.

Just what we need a known cop hater as DA

I have a better solution for this mangy, Queens County sewer rat: Let's toss Rory, Melinda 'Alley' Katz and senile Richard Brown behind that brick wall inside of which those innocent kittens are trapped - and, then rebuild the wall so that this voracious, predatory and rapacious thief (like every other Queens County, political thief), into solitary confinement for life!

That's just ONE creative way to rid Queens of a lethal scourge that now DEVALUES honesty itself! Besides, those three pussies will feel right at home in the filth and squalor that they SO ORDERED for everyone else! So, who's with me? I'll even cover the price of construction, materials and labor, to boot!

To second to last Anonymous: Your feckless councilman sounds just like mine: Eric Ulrich (a/k/a Derelict Dullrich). But, since when is a dereliction of public duty and abrogation of the contract of the oath of public office reward with $165,000 a year of We, the People's money?

The French didn't see the REVOLUTION coming, either!

I'm with Anon #3. Useless office. They'll even tell you to call a different legislator!

LOL! Americans have lost their stomach for a revolution....French style or otherwise. We are a nation of complacent complainers but we have not participated in democracy. Low voter turnout is our chief product. Bingo! You have lost your rights as citizens...you lazy bums!
This is why political trash like Lancman get to rise higher in their "profession".
He's a lackluster party bend over! But it's YOU who are about to get f----d!

You see, we need a District Attorney that will prosecute crime, not find things to decriminalize. Why is turnstile jumping considered a low level crime? as was proven in the past, when a person was nabbed for jumping a turnstile, they usually had priors or warrants for something else.

This guy's as worthless as all of the other Democrats that are running. Go third party on 'em. Run as an Independent or a Libertarian.

Rory Lancman is a piece of crap.

>we need a District Attorney that will prosecute crime, not find things to decriminalize.

We have more than enough things made illegal in this City. That needs to end.

What are his qualifications?

Take a good look at his picture, it says, "Lifelong Politician" He will do nothing for NYC, Queens or for you. Just another Democrat along for the ride!

Lancman and Grodenchik are two of the worst perennial slugs in politics.
These low down lifers are the crud on the bottom of a farmer's boots. Cow pies and horse apples!