Rules were made to be broken! 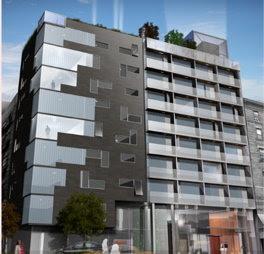 The Nolitan, a 60-room hotel going up in Little Italy's historic district, is too tall for the neighborhood, according to a Department of Buildings letter issued Jan. 19. The nine-story hotel on the corner of Kenmare and Elizabeth streets is in a zone that only allows for eight floors, or 85 feet. Neighbors complained about unsafe conditions at the construction site last summer, after which the DOB issued a stop-work order. The order led to an audit of the hotel, which found that the developer, Veracity Development, hadn't counted the ground floor as one of the building's levels when it said it was building an eight-story hotel. Veracity appealed the decision, but the most recent letter confirmed that the building is, in fact, nine stories, not eight, "and therefore contrary to [the] Zoning Resolution." The DOB's decision is not final; the developer can appeal it through the city's Board of Standards and Appeals.

Ah, zoning is merely just a suggestion. There are always ways around it!
Posted by Queens Crapper at 12:04 AM

Mark Silberman...their "consiglieri"...is probably too busy with his thumb up his ass or perhaps Bob Tierney's?

Make the builder an offer he can't refuse!

Shorten the building's height or shorten his life span!

So lope off a floor after the Developer pays a huge fine. Or, withhold the building CO.

What gets me is the irony of the name of the company, Veracity Development. Veracity -- as in truthfulness! Come on, already! Was that done on purpose to deflect investigation? "Hey, we're called Veracity. So we're on the up and up. Nothing untoward going on here." Yeah, right!