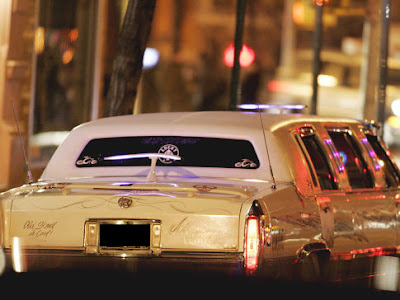 The '70's live inside the four doors of Al's white Cadillac.

For $100 an hour, late-night club crawlers can spread across its red leather seats, roll up its tinted windows and share a fat joint with the driver - Al, the affable cannabis chauffeur.

Al's dope limo service is a semisecret in the Manhattan after-hours party scene. To arrange a tour, you call Al on his cell phone and book a ride.

"I've been doing this a long time: 11 years," he said. "I take you where you need to go in the city in an enjoyable atmosphere."

The reporter - who did not smoke weed - watched as Al lit and passed a marijuana blunt while driving up Eighth Ave. towards Times Square on Thursday night.

It not being exactly legal is exactly why you should report his name. Haven't you ever seen "Shame On You"? Is DUI still illegal and highly dangerous or am I missing something?
Posted by Queens Crapper at 1:31 AM

Ah, the good old days. Thanks QC for taking us all back to prom nights in the 1970's. Good to see that some things are still the same after all these years. Now sadly, its just for medicinal purposes.

I didn't have a problem with this guy until it was noted that he also smokes with his passengers. It's one thing if he's providing this service, as I couldn't care less what people do behind closed doors. But he shouldn't be driving around the city while stoned.

Wadda ya think...maybe the limo company is a subsidiary of Michael Nussbaum's "Shanghai Entertainment LTD"?

Come to think of it...puffing a nice fat blunt on the way to a "Trib" whore house in a white Caddy doesn't sound that bad.