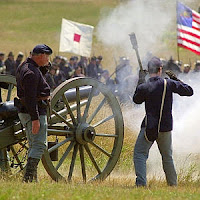 The state Parks Department had been hard at work preserving some 2,000 flags and standards carried into battle by New York military units -- most of them dating to the Civil War.

Nearly 500 flags, battered by decades of neglect, have already been meticulously conserved and made fit for display -- at a cost of only $100,000 a year.

Now, faced with budget cuts, the department is scrapping the program.

The standards are vital markers of New York's critical role at places like Gettysburg and Antietam. And New York has so many of them only because of its outsized contribution to the Union cause.

while the Parks Dept. spent 3 million per, playground to park conversions ,in 2009,these fools should not destroy U.S.history.

they planted 19 trees,which died,at P.S,159 in Bayside.
they were replaced in january in frozen earth. will they survive? stay tuned.
the ball field will be lost forever to the teens,if the trees grow.
gates remain locked 24/7.no humans have used the play ground/park since being refurbished in July 2009.WASTE,WASTE,WASTE.

The Parks Dept. is a bad joke. They should not be the custodians of such important heritage.

Here's a suggestion...
Instead of mounting the flags for display at $2k a pop, bag 'em in an hermetic enclosure till a more responsible party can be entrusted with them.

Smuggle in some Mexican or Chinese flags - very popular in these parts - certain folks will oblige.

All American Revolution and Civil War flags need to be preserved. End of story.