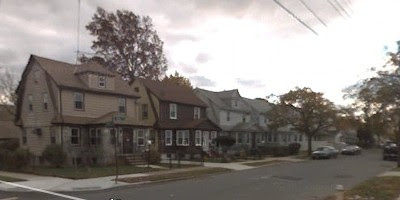 NEW YORK (AP) -- A Long Island contractor is accused of taking more than $140,000 from a 74-year-old New York City resident for renovation work he never started.

A criminal complaint says Lilian Miller paid Scott more than $143,000 in August 2007 to build an extension on her Queens home. Scott is accused of depositing the money in an account for his firm, U.S. Builder NYC and using the money for other expenses. Brown says Scott ignored the homeowner's repeated attempts to contact him.

Defense attorney Jeffrey Davis did not immediately return a call for comment left on his answering machine.
Posted by Queens Crapper at 1:40 AM

Throw this guy in the clink at Rikers island without bail for 2 months - that will teach him and server as an example to anyone else who even thinks about doing this.

74 is elderly? BTW why does she need an extension? Looks pretty roomy to me.

"georgetheatheist said...
74 is elderly? BTW why does she need an extension? Looks pretty roomy to me"

Barracks for the immigrants..your friends. A good republican like you wouldn't deprive the old bag of a chance to be a landlord...would you?

You know Lino, you wake up early every morning and spout the same Republican-Democrat schpiel on every post. It's tiresome and just plain lame.

George, I dont think her age or the fact that her house is roomy is the point.

He did a bad thing and he must pay!

It's actually none of Jorge's business what this lady does with her house. But I am glad that Jorge had an original thought and is just not spewing a quote he read from a text book.

Actually, it absolutely IS your business what your neighbors are doing with their homes. Attitudes like yours are the reason we have so many unreported illegal conversions that kill people.

My apologies. The DA's office has her address listed incorrectly. I got the correct address via ACRIS. You can't get a street view of her house, so I just did the streetscape from the corner. She lives in a house that's mid-block, not the corner.

2 1/2 years later. what happened to this guy. my guess is NOTHING

I wondered what the judgment was for this person. Was he convicted, sentenced? Is he still alive? Is he in prison?