Governor Cuomo: What deaths from coronavirus? I don't know 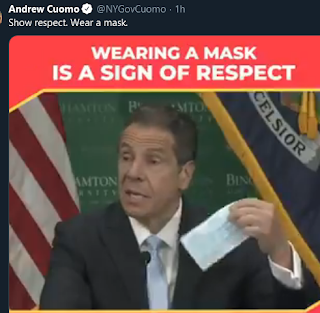 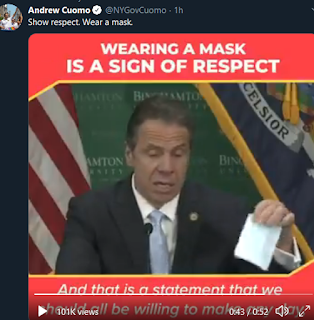 New York is one of several large states in America that is still not counting probable deaths, even though federal public health officials have been recommending states do so since April.

A review by the Washington Post found that New York was among 24 states, including California, Florida and North Carolina, that have not complied with the guidance issued by the Centers for Disease Control and Prevention.

The lack of probable deaths is "one reason government officials and public health experts say the virus’s true toll is above the U.S. tally as of Sunday of about 1.9 million coronavirus cases and 109,000 deaths — benchmarks that shape policymaking and public opinion on the pandemic," the Post story says.

According to the CDC, a probable death or case is defined as a person who meets certain clinical or laboratory criteria for the virus but does not have confirmed testing for COVID-19.

At news conferences, Governor Andrew Cuomo has been repeatedly asked why the state is not following CDC guidance in counting probable deaths. When it comes to nursing home fatalities, both New York and New Jersey have included probable deaths at nursing homes, but have not included them in their states’ overall death totals. 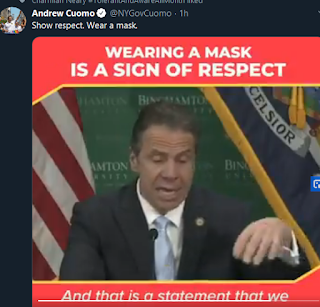 You folks keep electing these criminals in New York. I get the feeling that you'd much rather be lied to than hear the truth.

Worldometer has analyzed the data provided by New York City, the New York State antibody study, and the excess deaths analysis by the CDC.

These findings can be valid for New York City and not necessarily for other places (suburban or rural areas, other countries, etc.), but they represent the best estimates to date given the co-occurrence of these 3 studies.

New York State conducted an antibody testing study [source], showing that 12.3% of the population in the state had COVID-19 antibodies as of May 1, 2020.

The survey developed a baseline infection rate by testing 15,103 people at grocery stores and community centers across the state over the preceding two weeks.

As of May 1, New York City reported 13,156 confirmed deaths and 5,126 probable deaths (deaths with COVID-19 on the death certificate but no laboratory test performed), for a total of 18,282 deaths [source].

The CDC on May 11 released its "Preliminary Estimate of Excess Mortality During the COVID-19 Outbreak — New York City, March 11–May 2, 2020" [source] in which it calculated an estimate of actual COVID-19 deaths in NYC by analyzing the "excess deaths" (defined as "the number of deaths above expected seasonal baseline levels, regardless of the reported cause of death") and found that, in addition to the confirmed and probable deaths reported by the city, there were an estimated 5,293 more deaths to be attributed.

@#1 "You folks keep electing these criminals in New York"
Many New Yorkers and most of NYC Sheeple are misinformed brainwashed idoits when it comes to Politics. People with brains and IQ are voting with their feet and moving out !

RepubliScum or DemoRat it's all the same shit

Coronavirus projections converge amid concerns about a pandemic resurgence

And they complain that the President holds up a Bible.

I've been stating the truth about Covid-19 on this blog for over three months now.
I stated that this virus was wildly overblown from the start.
I stated that it would not kill millions.
I stated that it the hysteria was fed by the liberal media and willingly consumed by hysterical liberals and democrats looking to justify their worldview that the sky was falling from President Trump's presidency.
I stated that the Infected Fatality Rate would be similar to Seasonal Flu.
I stated that Seasonal Flu pandemics in the past have killed more than this virus but we never shut down our economy for it.
All the while, I gave readers the scientific facts and theory; from Farr's curve (yes, it has followed Farr's curve) to the variability of R-naught.

Now we have rioting, looting, and fires all over our major cities (all run by Democrats of course).
Time to connect the dots on this national shit-show:

Justice is being done, as we all can see, but that's not enough.
Now that the economy is waking up and we just had the largest job gains report in history, the Democrats/Liberals/Hollywood/Social Media/Academia are going full retard on this effort to take over and remake our society in the image of name-any-shithole republic around the planet. They understand that the awakening giant that is our economy is about to stir into action and brush their bullshit virus concerns and low-life rioters aside, so they are squeezing this crisis for everything it's worth.

In short, the virus was never going to kill "millions"; anyone with a decent IQ and a solid education in scientific reasoning could see this from the start. So, the left has had to continuously up the ante on societal dysfunction.
What happened over the past three months has been the increasing momentum of 4 years of non-stop assault on reason from the previously mentioned cabal of vermin.

Fear not however, for as we've learned from the Western canon of history (at least those of us who still value it); Fortune Favors the Bold (Fortis Fortuna Adiuvat).
On our side are formidable forces including those with religious values, those who value reason above emotion, the capitalist infrastructure, the middle class, the military, law enforcement, those who manage and produce our food chain, gun owners, history itself and most important of all ; the Truth.

My response was 'mobs are not the American way.'

American carnage: These aren't protests — they're riots. Someone must end the lawlessness.

Its about time we start to hear this. The next 2 or 3 weeks should be very very interesting.

Bill de Blasio can finally do something great for New Yorkers: resign

They're not misinformed or brainwashed, they're what you would call dolts. If all of you move, then please, move to another blue state. We don't want your infection.

If there was any justice and democracy left in this raped, ravaged and tonsured State and City of New York, then the same politicians who single-handedly murdered New York would be publicly hanged for their willful crimes against flag, state, country and Constitution.

The prosecutors continually hang the petty thieves, and the grand larcenous thieves appointed to public office always get a free pass, for which everyone else continually pays the ULTIMATE price for their unjustified freedom and massive, never-ending cover-ups. And, the ever languishing public be eternally duped, bilked, scammed and damned!


❝The men the American people admire most extravagantly are the greatest liars: the men they detest most violently are those who try to tell them the truth.❞ ―—H. L. Mencken - (1880-1956) American Journalist, Editor, Essayist

Today's America has become EVERYTHING that Hitler wanted his Germany to be: A fascist nation that holds the entire world at gunpoint. A nation where there are no free elections, the multinational corporations have merged into a few giant conglomerates cornering the market and calling the shots, and where the media are entirely controlled by the state, as the government spies on its citizens and the police terrorize them――in perpetuity!

❝To reverse the effects of civilization would destroy the dreams of a lot of people. There's no way around it. We can talk all we want about sustainability, but there's a sense in which it doesn't matter that these people's dreams are based on, embedded in, intertwined with, and formed by an inherently destructive economic and social system. Their dreams are still their dreams. What right do I have―much less anyone else?――to destroy them? At the same time, what right do they have to destroy the world?❞ ――Derrick Jensen, Endgame, Volume 1: The Problem of Civilization

❝Our society is run by insane people for insane objectives. I think we're being run by maniacs for maniacal ends and I think that I'm liable to be put away as insane for expressing that. That's what's insane about it.❞ ――John Lennon

❝The media have become the propaganda arm of the very wealthy.❞ ―—Brian Emo

❝ALL tyrannies rule through fraud and force, but once the fraud is exposed, they must rely exclusively on force.❞ ―—George Orwell

❝It’s discouraging to think how many people are shocked by honesty—and, how few by deceit.❞ ―—Noël Coward

❝Propaganda works best when those who are being manipulated are confident they are acting on their own free will.❞ ―—Joseph Goebbels

❝You never change things by fighting against the existing reality. To change something, build a new model that makes the old model obsolete.❞ ―—Buckminster Fuller

❝Terrorism, first and foremost, is an instrument of statecraft.❞ ―—Neil Kramer

What’s the over under on blacks killing blacks this weekend in Chicago? 20? 25?

@Anonymous "Please, move to another blue state. We don't want your infection."
We don't want to hear your ignorant hatefull comments! A-Hole...

Joe Biden's Dentures said...
These New Yorkers are people stuck there with the crazies & crooks !

How is Cuomo II still worried about “killing Grandma” when he already killed all the grandmas?

Scott nyc said...
Grandma has the options of death by coronavirus or death by "protester".

QC Reader said...
Everyone "loves" his daily briefings until he is finally asked a question and then he flares his horse nostrils and acts like the "Capo De Tutti capi". Marone!

Yawn!
The usual Democrat bashing.
With COVID in full swing and a lot of idle people hunkering down at home.....the comment list here has increased to huge proportions. Maybe that’s why I’ve shunned this site for awhile. Malcontents multiply with idle “minds”’😝

"Yawn!" Take your coments to the basement where you live and stay on Twitter with all the idiots.