A Real Estate Board of New York-backed political action committee is spending big for Donovan Richards in the final days before the Democratic primary for Queens borough president.
Jobs for New York, a PAC founded by REBNY officials and funded by the city’s largest development firms, spent $66,411.68 on mailers and live phone calls promoting Richards, a Southeast Queens councilmember.

“Donovan Richards has devoted his life to serving Queens County and creating economic opportunities for our families,” the mailers read. “Donovan Richards is a leader who stands on principles and convictions. Not politics.”

In addition to promoting Richards, some of the literature goes negative. The reverse side of one mailer specifically targets Richards’ opponent Costa Constantinides, listing how the Astoria councilmember has “failed” condo and co-op owners.

“This year, we are facing the most important election of our lifetimes,” the mailer states. “Some of our leaders seem tone-deaf.”

“It is clear from Council Member Richards’ lengthy track record of working to improve NYCHA, creating affordable housing and good jobs and serving as a consensus builder that he is ready to be the next Queens Borough President,” Jobs For New York said in a statement.

The Queens borough president is tasked with making advisory recommendations on land use proposals, including projects backed by major developers. In Queens, large-scale projects at Sunnyside Yards, Willets Point and the Flushing Creek Waterfront are in the works, as development continues to surge in Western Queens, Flushing and Jamaica. 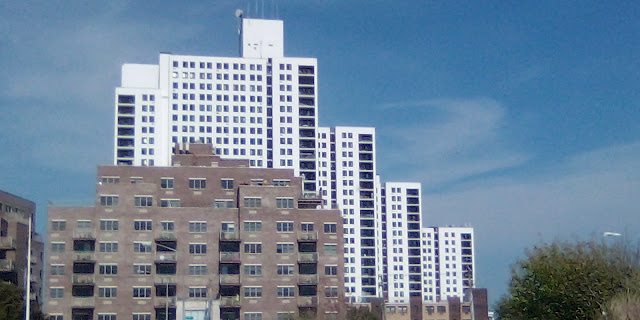 We don't need anymore proof that Donovan Richards is a bum ,con artist and thief.

He's taking money from the landlords because they want more control for their government funded 421-A buildings in Far Rockaway. He's in their pockets

He does the bare minimum for constituents and that's always in front of the news cameras.

Millions of dollars could be saved by a simple legislative move to abolish ALL citywide borough president positions. Like the Public Advocate post, they are a colossal waste of time, and obscene taxpayer money that offers nothing more than a patronage mill which continually rewards mediocre politicians for inferior service and a dereliction of public duty.

These arrogant power grabs for the most vacuous and insipid positions known to humankind ALL DEVALUE HONESTY ITSELF!

Donovan Richards favors using "local labor" as opposed to "Union Labor" on projects using government financing. Is favoring the exploitation of neighborhood people something to be proud of? I think NOT.

This councilman went ahead and voted for a giant development on the site of the former Peninsula Hospital center, despite the Community Board in Rockaway rejecting the proposal due to no school proposals, no anchor tenants aside from Western Beef and no variety in income for the proposed housing.
As a result, Rockaway gets 2000 more units of low income housing in a massively dense structure out of tune with the local seaside community. The city's own Environmental Impact Study stated that there would be severe detrimental issues with the huge scale of the housing proposal.
Richards ignored the community board recommendation to scale down the size, include a wider mix of incomes to attract a wider mix of tenants and space for a school.
No surprise that he's receiving large funding from developers now. There's still a lot of land available in Queens, and now that housing homeless individuals, illegal aliens and the permanent poor, is a booming business, they need their point man in Queens.