JVB: Champion of the Working Class and dutiful cog of the Queens Machine 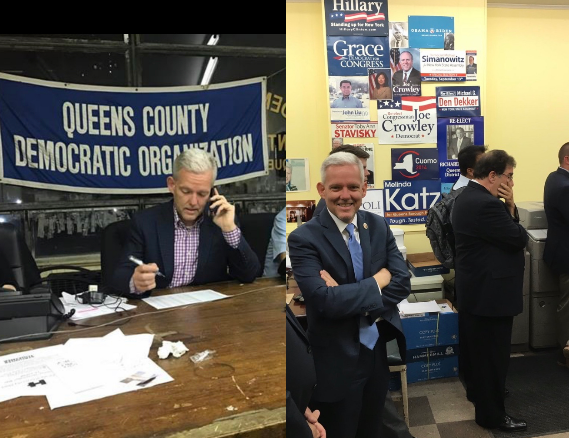 Do not know anyone in his district that has anything to say nice about him. Arrogant. Chip-on-the-shoulder. Smug.

In Queens we get these people with no support that dismisses their constituents and breezily moves forward year in and year out.

You can do that when its public policy not to teach American civics in schools and import large numbers of people without the foggiest notion of what American participatory democracy is all about.

Trump and Van Bramer may be on different sides of the aisle, but are in the same room.

He's not a champ, he's a CHUMP who is 'malingering' on the public dole! He couldn't even raise any serious objections when 'Triumph of Civic Virtue' was robbed in plain sight from Kew Gardens Plaza when he chaired the arts committee because his balls were missing in action when it came time to challenge public patronage Queen Melinda, who green lighted an ill conceived plan from the late Helen Marshall that never saw even the narrowest passage to due process and public referendum, much less any challenge from the feckless Community Board 9.

In fact, a cackle of hyenas would be more credible than this cabal of entrenched, hyper-corrupt, establishment-rigged, intentionally out of touch, monstrously failed public servant, and his equally failed community board of public trust betrayals that have always devalued honesty itself

What is the original source of these photos.
Where and when were they taken?