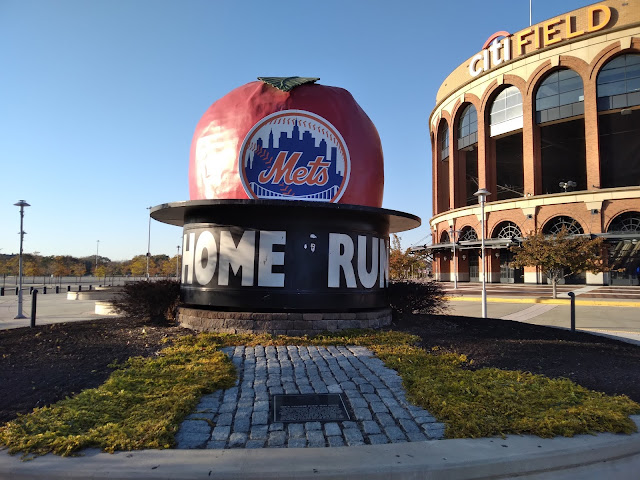 The site will be run inside the stadium, located at 41 Seaver Way, by NYC Health + Hospitals, and will have a capacity to administer 5,000 to 7,000 vaccines a day. It will open in the week of Jan. 25, according to the mayor.

“This is going to be fantastic. This is going to help so many people get vaccinated,” de Blasio said, praising the Mets for stepping up and helping the people of Queens and New York City as a whole. “We welcome Queens residents. We welcome all New Yorkers. We even welcome Yankees fans. There is no discrimination.”

De Blasio said there is still work to do, but it will be a “game-changer.”

“When we heard about your initiative, we were just so excited to participate in this program,” Cohen said. “It’s so important. We know the suffering that’s going on with COVID. Anyway the organization could help support this effort, we were going to do it. We talked about being involved in our communities and I can’t think of any way that’s more important than what this hub is going to do.

Cohen described Citi Field as the “intersection of Queens,” that can be reached by subways, trains and highways.

“The goal is to just get the vaccine in people’s arms so we can get this crisis over with and get back to living a normal life,” Cohen added.

After weeks of feeding the fan base appetizers, the organization served a main course Thursday, completing one of the splashiest trades in franchise history.

The result was Francisco Lindor and Carlos Carrasco headed to Queens in a blockbuster deal that sent Amed Rosario, Andres Gimenez, Isaiah Greene and Josh Wolf to Cleveland. The trade — the first “wow” moment of new owner Steve Cohen’s tenure — bolsters the Mets’ lineup and rotation, turning the team into an instant NL East contender.

The 27-year-old Lindor, who can become a free agent after this season, rates among the game’s premier shortstops. The Indians have been shopping Lindor the last two winters in an attempt to shed payroll. He is expected to receive around $20 million this season in his final year of arbitration eligibility.

Yes, right after you complete the 51-step online registration process!

“We welcome Queens residents. We welcome all New Yorkers. We even welcome Yankees fans. There is no discrimination.”

Just saw the NYC health commissioner on TV he basically said if you are white, you need not apply. You will not get the vaccine.

Placement makes total sense and why it wasn't Madison Square Garden.
Bastard mayor said he would reward people of color, immigrants in hardest hit neighborhoods priority over people who live clean, legal and normal.
It appears to apply for the vaccine anything other the 1A 1B requires a list of demographic information to be completed. Check Black" or Hispanic?
It appears white people under 65 with no dependents under age 28 are going to land at the end of the cue (or possible dead) in the nyc 5 boroughs.

ok so they will kill the elderly first, since they stole their money so no SS money left.
then the rest.
what a joke.

My relatives think I’m a fascist for wanting free speech and less government.

Since everyone on the planet originated in Africa - check that out HERE - fill in all applications (vaccine included) as Black/African-American and get your proper place in the line.

Indeed. Black Lives Matter because, as you can see from the above: All Lives Are Black.

Just saw the NYC health commissioner on TV he basically said if you are white, you need not apply. You will not get the vaccine.

Perfect. They can have my dose too.
No hard feelings.

My relatives think I’m a fascist for wanting free speech and less government.

How quick some forget what this country USED to be about.

Unless one is a corporation and in bed with the uniparty politicians - hard to be a fascist or socialist. The education system failed THEM, not you.

Yeah so you'll get covid as you're waiting to be vaccinated...wonderful

Yeah so you'll get covid as you're waiting to be vaccinated.

stupidity will kill faster though.

Interestingly enough most of them are lily white papered, privileged liberal kids.
It it really mattered they would move into the hoods and try to make a difference.

"The education system failed THEM, not you."
Now DOE will fail the whole city starting next year !
NYC DOE will scrap Gifted and Talented test after this year- NYP Article !
https://nypost.com/2021/01/12/nyc-doe-to-scrap-gifted-and-talented-test-after-this-year/

Yep. No need to have the ability to critically think - dangerous, once the slaves figure out how the system fucked them over.

Yeah. They can have my dose too, and the Bells Palsy.

Doctor told me today even with mild CPOD & 911 BOOP from lower Manhattan moving computers there is no chance of me getting a Covid Vaccine till at least July-December due to my household demographics and supply.
He was very upset with some memo he received and said I'm going to tell you anyway.

"Your white, retired,unmarried and don't have any kids on your 1040. This make you disposable to the system. After people in high density urban living the government is going to prioritize people with kids
(likely because Federal, State and City has no money to support any more welfare let alone widows with children'
'Your at the absolute end of the line and should see a lawyer to write up a will and pick any IRA beneficiary's just in case"
Disposable at age 57?

If you live in a Homeless shelter, Subway station, Jail your at the front of the line regardless of age with first responders.
https://www1.nyc.gov/site/doh/covid/covid-19-vaccine-eligibility.page

Some of you are looking at this incorrectly. Having a mass vaccination site like Citi Field will stuff the #7 train like it's a Subway Series game. This will SPREAD the 'Rona to the people you think are being favored.

Anonymous said...
Yeah so you'll get covid as you're waiting to be vaccinated.

stupidity will kill faster though.

Unfortunately, it won't kill enough of the stupid fast enough.

Yep, hate to tell you but if you're white, vaccines are not coming to your area anytime soon. Most of the vaccination sites I have seen have went to black and Hispanic areas right now. So if you really want the vaccine, you need to go to the "minority" (even though they are not the minority in general when it comes to the world population) neighborhoods.The liberals and media would love to see all white people dead if they had their way. Sorry to tell you idiot liberals and media but the reason why most "minorities" are getting sick from this virus is because they like to party too much and they don't take care of themselves. Black people in general have higher rates of obesity and diabetes than whites and most tend to live in apartment buildings. The same goes for hispanics too, they tend to live in apartment buildings with a million other people and their apartment buildings are usually dirty and the air filters in those apartments probably haven't been changed in years. But thats what happens when you want to live in filth and cheaply.