Only buses on Main Street to Flushing 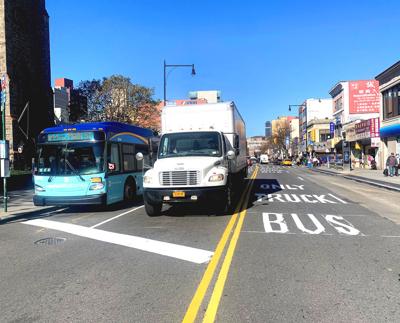 State Supreme Court Justice Kevin Kerrigan struck down a lawsuit by the Flushing Chinese Business Association Jan. 5 that claimed prohibition of street travel for passenger cars and lack of road parking will deter shoppers who drive into the neighborhood, resulting in a dramatic drop in Flushing business. Kerrigan was unconvinced there was evidence that the 0.3-mile stretch of priority bus travel would slow commercial activity.

“How efficacious the Busway plan will be or what precisely its impact will be upon the community, if any, is presently unknown,” Kerrigan wrote before denying the Article 78 proceeding. The judge suggested that opponents address their displeasure with their elected officials instead.

The Rider’s Alliance happily and immediately shared the news Tuesday afternoon, stating, “Today’s decision is a huge victory for 150,000 bus riders across Queens and the Bronx. Citywide, judges have now ruled decisively that when riders win well-deserved priority on busy streets, opponents can’t sue and get their way. Just as Trump and his supporters can’t overturn the vote, neither can courts ‘invade the province’ of transportation policymakers on behalf of a few rich NIMBYs.”

What is the bastard city trying to do, place all these small storefront and sidewalk venders on welfare? I suppose force them to sell, knock down and build shit ugly eurotowers because its by 2 train stations?
Those Flushing people that use the trains don't use busses, they walk!!
Is this still the United States or some annex of The Soviet Union?

"What is the bastard city trying to do, place all these small storefront and sidewalk venders on welfare?"

C'mon use your imagination! All the Asian movers and shakers want this so the little guy is forced out and they can buy the structures along Main Street, rip them down and build high rise condos and co-ops.
Think of Hong Kong.

Is this still the United States or some annex of The Soviet Union?

Great news. Queens Boulevard next. Next with a real president on the way, congestion pricing.

I remember the days when flushing was actually normal. I miss those days. I wish the 80s would come back.

"C'mon use your imagination! All the Asian movers and shakers want this so the little guy is forced out and they can buy the structures along Main Street, rip them down and build high rise condos and co-ops."

You are onto something. Last night, early morning huge fire in Flushing, 37th Avenue, right off Main Street

"I remember the days when flushing was actually normal. I miss those days. I wish the 80s would come back. "

I guess no one has taken a walk along Queens Boulevard lately to see the damage done by Bike Lanes.

Businesses established in the 1940s and viable until the Bike Lanes were put in are now gone.

And, to make matters worse, the Real Estate Developers -- who line the pockets of our "elected crime families" like the Cuomos and Dumblasios, are grabbing up the empty properties at firesale prices only to build mega towers without any additional infrastructure accommodating the thousands of new tenants and co-op owners for sewage, garbage, electric consumption, schools (already full and over capacity).

Oh, well. Some of us will be long dead before everyone is on government welfare and taxes will be a word relegated to the dustbin of history.

But not to worry. All those who own private residences will, by decree, turn over their property to the local governments at Eminent Domain compensation for the local governments to build prisons. Those prisoners -- poor souls -- have to resort to illegal means of supporting themselves and eventually get caught. We, the hapless thousands who pay taxes to support government prisons and public housing, are now responsible for making sure prisoners will be supported in the most humane ways possible.

Oh, you say, the money collected from co-op owners will fill the void. Sure. Until it becomes too onerous to own. What will the City do when no one pays taxes?