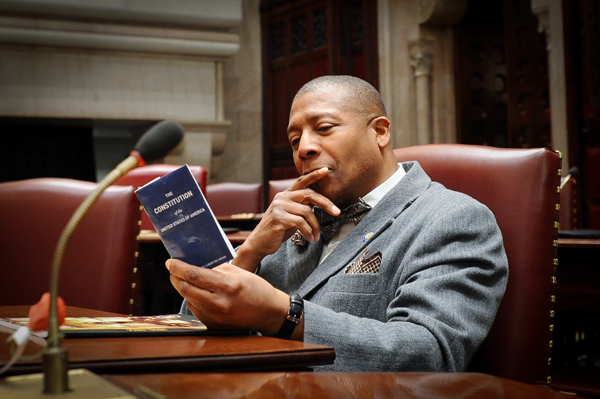 A state lawmaker from Queens was slapped with a $15,000 fine for accepting free meals and trips from a nonprofit that he boosted during his time on the City Council — all of which were paid for by Big Apple taxpayers, according to the city’s ethics watchdog.

State Sen. James Sanders Jr. (D-Queens) scored five stays in luxury accommodations at a resort in the Poconos and five swank Hudson River dinner cruises for himself and family members from the Margert Community Corporation, a non-profit that provides rent assistance and other social services to low-income families.

All told, Sanders cashed in on gifts worth at least $4,000 from the MCC as he doled out more than $840,000 in city funds to the group, the Conflict of Interest Board said in its report, which was released Tuesday.

COIB determined that Sanders broke ethics rules an astonishing 18 times between 2008 and 2012 as he represented Far Rockaway and adjacent neighborhoods as a city lawmaker.

Yes, but White politicians do it all the time, and it's only fair that an African-American politician gets to rip off taxpayers also, in order to redress this historic racial disparity.

the rules don't apply to the elected class.

Thank god we have a democratic process that allows us to vote for the best candidate to represent our districts and political interests.

Look closer and they'll find he's accepted bribes from developers in his district for "Help" in getting variances...

He's arguably one of the dirtiest politicians in Queens....

Why not every other politician is doing it and nobody does a fucking thing. Hey it's free money. These politicians should all be in jail.
KEEP VOTING FOR THESE IDIOTS.

Really SJW? Fight racism with MORE racism in the reverse? You must have skipped out on high school Civics!

Incidentally, my equally racist 'NEW' Assemblyman, Khaleel Anderson has hired an entirely Black staff - not a single White employee! GRRRREAAAAAT! Now, I can expect to be willfully ignored with a deeper committment to impunity.

It's bad enough that the worthless Michele Titus sicced her lawyer, Richard on me and threatened me with violence, because I rightfully used my First Amendment rights to tell that hack how his boss was an even bigger coward and more entrenched, DemonRat hack when she repeatedly refused to help me with a matter that was clearly within her purview and jurisdiction to challenge. Likewise, her equally, intensely incompetent staff (ALL BLACK!), ALL gave MENDACITY a bad name!

Get used to reverse discrimination, White peasants of southeastern QUEENS: If you think that 2019 was a karmic disaster, just wait until these Black radicals for junk justice get fired up to accomplishing absolutely nothing (which is why nothing has ever changed, and never will)!

No racism. Only color is GREEN baby!

while posting editorials on QNS.com that no one cared about.

So I guess he doesn't eat at Olive Garden ?