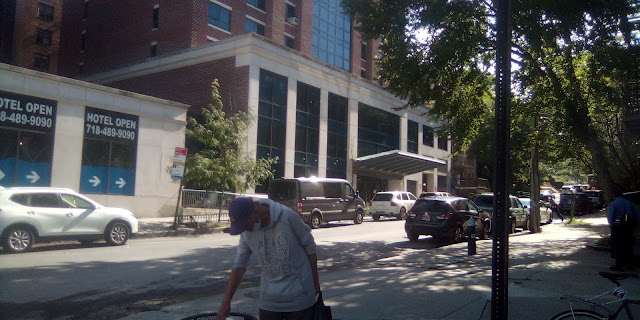 One person was killed and two others injured during a shooting at a hotel in Queens on Friday morning, sources said.

The shooting took place at the Umbrella Hotel in Kew Gardens around 1 a.m., according to police sources.

Three males were stuck by gunfire during a gathering outside the building.

All three were taken to Queens General Hospital, where one died from his injuries. The other two were being treated for their wounds.

Their ages were not available early Friday.

So, the new year started in Queens with a bang-bang-bang. Seriously, isn't this is sleazeball hotel that neighbors want shut?

I remember when queens used to actually be a pretty safe place. Now all the crap moved in and its slowly moving east. Good luck.

Across the Queens County Court and the DA's office!

Virus? What virus? Looks like some communist dictator and his crazed wife!

No worries the new jail will really class the place up.

112th Precinct is busy on Facebook - no worries. All under control.

You do mean a homeless shelter formerly a hotel? No wonder people would rather bed down in the subway or doorways when it’s 10 degrees outside- than risk their lives in one of these shelters.

You do mean a homeless shelter formerly a hotel?

Nah we meant a criminal hangout next to the Queens DA's office.

Perfect pairing if you ask me.

Why is Katz protecting these bums? Sad day that no one thinks of the victims of these criminals. They are destroying the neighborhood.

Why is Katz protecting these bums

Political hack. They are good on getting innocent people arrested, charged up with zillions of crimes, but when it comes to real crimes and criminals they are nowhere to be seen.

There should be a FEDERAL investigation how many minorities are railroaded by the Queens DA/judicial system to provide clients for the PRISON INDUSTRY!

Mr. Trump do it. They are the CRIMINALS!