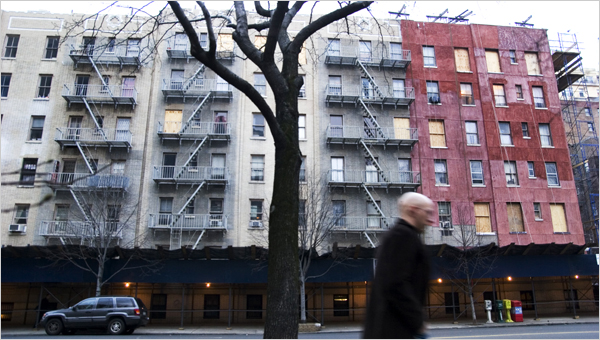 A real estate company is being blocked from redeveloping two Upper East Side tenements by a state court's ruling that they are historic landmarks.

The decision caps a two-decade tug-of-war in which the buildings were granted landmark status, lost it, got it back with the City Council's help, and most recently faced the prospect of losing it again. The tenements were built in 1915 as part of a model complex that aimed to improve the quality of "affordable" housing.

The 15-structure development, occupying a block on York Avenue between 64th and 65th streets, was first designated as a landmark in 1990. In a compromise with owners four months later, the now-disbanded Board of Estimate stripped two of the buildings of their status.

The Landmarks Preservation Commission restored the designation in 2006, and the City Council backed it by a unanimous vote. The owner sued in state Supreme Court but lost in the decision announced yesterday.

The ruling allays fears that the owner, Stahl Real Estate, would tear down the tenements to make way for a pair of glass office towers.

Some of the tenements' architectural details have been altered, including their original paint color and façade material. The owner admitted to making those changes simply so it could argue that the buildings lack value as landmarks, according to the court's written opinion.

The court's decision "will make owners throughout the City think twice before removing certain features from their properties in an effort to stave off landmark designation," the Landmarks Preservation Commission chairman, Robert Tierney, said in a statement.

A representative for Stahl, Brian Maddox, noted that Judge Goodman cited the buildings' history and structure — rather than their architectural detail — in concluding that they are landmarks. The company is considering an appeal, Mr. Maddox said.

Sure they save this non-descript crap - ha - when the real deal in Queens is to be saved - well who cares right!

Sure the LPC takes care of its own "altered beyond recognition" Manhattan landmarks.

But this is Queens where the LPC applies a different set of "criteria"and if we complain too much we get a cork shoved up both ends simultaneously!

Abolish the unjust landmarks law and let Manhattanites swim in the same piss water as we do!

St. Saviour's, a classic mid 19th century country church designed by
Upjohn sits in pieces in a couple of metal cargo containers
while this row of crap has landmark protection!

Tear this shit down and replace it with some high design world class architecture!

For once this avid preservationist
is on the same side as the developer!

They are interesting buildings that do have important historical value.

One big reason they look like crap is because for the last several decades the landlords have been ripping out details and letting them rot on purpose so he could claim they are crap and tear them down and in doing so empty them of old rent controlled tenants.

Just because they trash Queens all the times does not mean they should also get a pass in Manhattan.

Why shouldn't they "get a pass?"

When will they stop getting a pass in Queens?

When will the landmarks law benefit all classes in all borough?

They will stop getting a pass in Queens when the people of Queens choose to elect honest leaders who do not sell them out.

Time to stop blaming Manhattan for the mess in Queens, time to start emulating Manhattan in electing officials who protect your interests.

And how many hours did HDC spend defending these shit piles
(ha, ha, ha...with "historic value") compared to the minutes they spent in Queens?

My ass has historic value too!

It sat on the same toilet seat in
the St. Regis Hotel's men's room
just after Salvador Dali
(who lived there)
had just gotten off and
warmed it up nicely for me!

I'm putting in an RFE
to the LPC for my old "tookas"!

A line from the film "Chinatown"
spoken by actor John Huston:

I don't care
who slapped the stucco
(which is nearly impossible to remove) on these eyesores
or for what damn reason.

The LPC chooses
to recognize them as worthy sites.

But when a little bit of
(easily removed) siding covers a historic building in Queens
it suddenly becomes unworthy
of designation
(i.e.like Saint Saviour's Church)!

C-mon,
it's not like George Washington
in one of these "historic" flats.

The differecne here is that the local council member pressed the city to reverse the "backroom deal" that the Board of Estimate cut to overturn the landmarking. Did any of the Vallones ever do the same for Astoria?

Never expect La Famiglia Di Vallone to do anything but line their pockets and perpetuate their fiefdom!

It was an extra warm day in hell
when Charlie "the judge" spawned his abominations!

LPC Chairman Robert Tierney said the court's decision "will make owners throught the City think twice before removing certain features from their properties in an effort to stave off landmark designation".

This statement is not true. The only reason why the Stahl Organization (co-presidents Richard F. Czaja and Gregg Wolpert's) attempt to render the buildings not worthy of landmark by destroying the facade did not work in THIS case, is because the apartment buildings at issue, were landmarked -- not as individual landmarks -- but as part of a whole -- an entire block of aparment buildings that comprise the First Avenue Estate. Ruining any or every facade in a landmarked building group was pointless.

This ruling changes nothing for owners seeking to render individual buildings unworthy of landmark status. They can go on their merry way the same as before.

Btw, this battle continues with the owners putting in a hardship application -- to allow them to demolish the buildings despite the landmark designation. The owner claims that at market rates, a one bedroom on the upper east side of Manhattan that includes all utilities will not fetch more than $600 a month. Now why would the LPC entertains such an obviously fraudulent application?