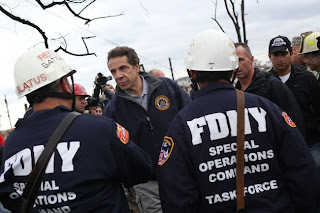 Gov. Andrew M. Cuomo plans to ask the federal government for at least $30 billion in disaster aid to help New York City and other affected areas of the state recover from the devastation of Hurricane Sandy, according to top administration officials.

In making the case for federal aid, the governor’s advisers provided a staggering inventory of need as the city and state continued to rebuild in the storm’s deadly wake: $3.5 billion to repair the region’s bridges, tunnels and subway and commuter rail lines; $1.65 billion to rebuild homes and apartment buildings; $1 billion to reimburse local governments for overtime costs of police, fire and other emergency personnel; and several billion dollars in federal loans and grants to affected businesses.

Mr. Cuomo’s request could be seen as a challenge to Mr. Obama to make good on his pledge, delivered during a high-profile visit to New Jersey, to provide federal support for the recovery effort. But it also could be seen as a test of the governor’s ability to extract billions of dollars of aid from Washington at a difficult time, with White House officials and Congressional leaders searching to find areas of government to cut to avert a Jan. 1 fiscal crisis.

It is far from certain whether Mr. Cuomo will get what he is looking for despite the president’s reassurances. The amount the governor is apparently seeking would exceed the roughly $12 billion in FEMA disaster aid currently available in Washington without action from Congress, where there is likely to be strong opposition to more spending.

Mr. Cuomo’s plan, which is still being drafted by his aides, rests in part on persuading the federal government to make an emergency appropriation in the coming weeks during a lame-duck session of Congress that begins on Tuesday.

New York will not be alone in seeking disaster relief from Washington. Members of Congress in both major parties from other storm-ravaged states — including New Jersey, Pennsylvania, New Hampshire, Virginia, Maryland, North Carolina and Virginia — will almost certainly be seeking federal assistance for their constituents.

In the meantime, FEMA is already sending out rejection letters to people whose homes sustained damage during the storm because they don't live in the right zone.

Maybe someone can ask Barack about that tomorrow when he pays his visit.
Posted by Queens Crapper at 12:06 AM

The Guv is grandstanding to secure another term in office!

NYS will wind up paying plenty for disaster relief which will be passed on to us all in increased taxes.

Of course Washington will dole out it's share, but WE will get stuck with a large bill.

In the end (how appropriate "the end") the little guy ALWAYS gets screwed!

Hey Gov Mario Cuomo ll. : no need to have an investigation into LIPAs failure. This is a state run organization overseen by your administration. This happened on your watch. Look no further than your offic in Albany.. The same thing happened during your lack of leadership of HUD. Tht was a major disaster that we are still dealing with.
Stop lying to the people of New York State! Time for you to resign.

Jersey and NY handling of the utilities completely different.

NY they are the whipping boy (along with the transportation system) to direct heat away from the politicians whose poor planning and sell out to developers diverted money away from infrastructure and into development.

A bit like Astoria blackout a few years ago when Con Ed took current customer fees and used it to plug in new development while letting Archie and Edith's service rot.

Of course if Archie and Edith fall for the pol's ruses they deserve the crap that is fed to them.

Yeh and tell him to stop imitating his father's voice, gestures. And expressions
It's sickening!

what would Bob Grant say?