And now, the spending spree 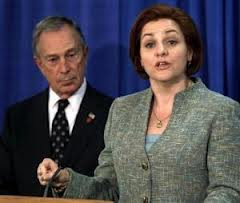 The mayor joined City Council Speaker Christine Quinn and Comptroller John Liu Monday to announce that a total $200 million has been allocated for the city’s Department of Education, while $300 has been appropriated for the city’s Health and Hospital Corporation to repair school and hospital buildings following the storm’s visit to the city in late October.

“Our city has never experienced a storm as destructive as Hurricane Sandy and financing for these repairs is as necessary as it is urgent,” Bloomberg said. “These school buildings and public hospitals are resources that hundreds of thousands of New Yorkers rely on every day and we are not waiting for federal aid to begin the work of repairing and reopening them.”

Repairs at the buildings will include structural restorations, new boilers and electrical systems, roof repairs and flood remediation.

As if defying Mother Nature, Speaker Quinn wants to make sure that never happens again. She announced today that the City Council, in partnership with the Bloomberg administration, will accelerate two studies analyzing what kinds of risks the city faces from storms, and what could be done to mitigate them.

She expects New York will spend billions implementing new infrastructure to combat future disaster, which she predicts would cost around $20 billion. Ms. Quinn believes the federal government should cover most of those costs, pointing to the government response to Hurricane Katrina as a precedent. She also announced that Senator Chuck Schumer is putting together a study of his own with the Army Corps of Engineers that will help the city determine the best defense for the city from future disasters, as well as the general rising of the tides due to climate change.

On the smaller side, the speaker called for major investments in the city’s sewers, to stave off sewage flow into the city’s waterways during storms, due to our combined sewer overflow system. She also wants soft infrastructure that will help absorb stormwater, like permeable pavement and green streets, or new marshlands, known as bluebelts, that help purify runoff. She called for buffers around subway grates, raising station entrances, even out-there technologies like industrial balloons that would seal the subways and other subterranean infrastructure off.

There should be revisions to the building codes and the development patterns, which the city’s Building Resiliency Task Force will undertake. Through the Real Estate Board, the task force will be holding emergency sessions to assess the rebuilding effort following the storm.

“We also must rethink the way we build in neighborhoods that were destroyed by the storm,” Ms. Quinn said.

When are they going to just come out and announce that they are condemning the waterfront with the plan to sell it to a well-connected developer down the line? Isn't that the history of Rockaway?
Posted by Queens Crapper at 12:25 AM

She announced today that the City Council, in partnership with the Bloomberg administration, will accelerate two studies analyzing what kinds of risks the city faces from storms, and what could be done to mitigate them.
----
Scrambling with yet a new 'received' wisdom before the public starts to form its own conclusions that these people cannot plan and only pander to development while short changing us with our own taxes.

When are they going to just come out and announce that they are condemning the waterfront with the plan to sell it to a well-connected developer?

Maybe big bucks offers for their properties for those not wanting to rebuild to move elsewhere is a good thing as long as it replaces the value of the property. Anyone thereafter is on the hook for self-insuring their property (no govt bailout in next storm).

Sounds like a land grab by Mayor Marathon and the Slush Fund Queen's developer friends.

"even out-there technologies like industrial balloons that would seal the subways and other subterranean infrastructure off."

That happens to be a good idea and is possible!

ANOTHER study. Great. Anyone notice how many of these studies are little more than delaying tactics, supporting out-of-town "researchers"? And, speaking of out of towners, how many contracts will go to local contractors? Or will the usual New Jersey-based carpetbaggers get the awards?