Community Board from hell opposed to development outside their district 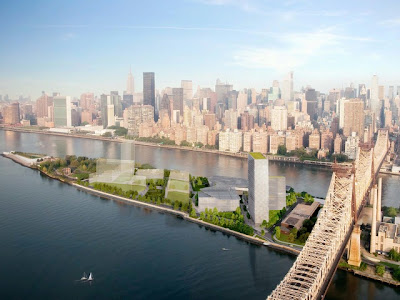 The construction of the Cornell NYC Tech campus on Roosevelt Island will bring traffic and pollution to Astoria, where the only bridge to the island is located, Astoria Community Board members said during its meeting Tuesday night.

The community board however has little say over the development plans because the project is located within the area of Manhattan Community Board 8.

Construction will start in 2014 and the campus will open its doors to the first students in 2017. It will take another 21 years to complete the campus, which will eventually host 2,500 students and sprawl over 2-million square feet.

Astoria Community Board members said they are worried that the university, both during its construction period and once it is operational, will bring too much traffic, pollution and noise to the neighborhood, especially in the area surrounding 36th Avenue where the bridge is located.

When has CB1 ever been against development? Or are the players just upset that they aren't getting a piece of the action for this one?

“We’ve heard all these beautiful stories about the project many times,” said George Stamatiades, a board member. “If you are only expecting a six percent increase in the volume of traffic coming through our community, there won’t be that many people on that island.”

Yes there will be many more cars coming and going where before you only had the Goldwater hospital workers driving to work in shifts.
Maybe it's time to ban cars on Roosevelt Island.

Carolyn Maloney said our community is one of those that gets the most money of any neighborhood.

Shame we only have a big hole to show for it. But hell, the folks from Long Island can cut a few minutes travel time.

But who is complaining? The Dutch Kills Civic Association has lots of support from the politicians.

I would like to invite them over to see the floor show 5 feet from my son's bedroom window in the hotel room next to his.

Good work George! Thanks for bringing in those politicians and their money to help your community.

The civics from all around NYC should come here and study your record. I am sure they will find it most interesting.

Stamatiades is ticked because this will effect development on Vernon Blvd.

Playing around with the timing of one traffic light to handle Suna's three 40 story 'public access job-creation project' will not work with the additional Roosevelt Island plans.

They might have to do some real traffic management studies.

Sure, a great place for science...right in the middle of a river with only one bridge off and on the island.

Just ask all the research scientists about their work that got destroyed by the hurricane ... just a few hundred feet away in Manhattan.

They shoudld gave built the campus at Sunnyside Yards or Flushing Meadow. Why do they always treat Queens like we are not good enough?