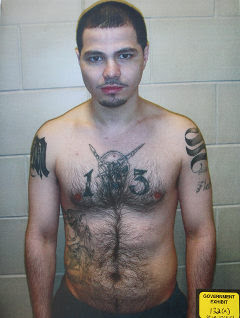 An MS-13 gang member whooped it up, shouting "The beast has eaten!" after murdering a Queens man he mistook for a rival Blood, a government witness testified Thursday.

Julio Chavez is charged with emptying his revolver into Maurice Parker on May 18, 2007, in Flushing.

" 'Yeah, homie, that's how you're supposed to do it,'" Chavez said, according to Molina. "'You see the blood coming out of his head?'"

Molina said Chavez then uttered, "The beast has eaten!"

"That he had just given a soul to the devil," Molina said.

Parker, 21, was not a Blood and was mistakenly targeted because he had on red sweatshirt.

Chavez and other members of a Long Island-based MS-13 crew allegedly went hunting for a Blood to retaliate for an earlier stabbing.
Posted by Queens Crapper at 12:52 AM

Many more soccer fields, coaches/mentors and community involement/acceptance might save these lost boys. You can't just lock them away forever, or ignore it and hope it goes away. We will pay for it one way or the other, so we might as well just fix the problem and try and save these lost boys. Juvenile delinquency is a 20th Century problem, in the past sweatshops and children soldiers left no free time for gangs.

In the meantime I hope this dirtbag goes away for a long long time..... to kill because someone is wearing a red sweat shirt....He will see the US prison system as the "Beast", when they ass rape him. ENJOY life behind bars!!!!!

And Poetry writing classes. Yeah, that's it! Let them get in-touch with their gentler side. After all, this is a societal problem and not a juvenile one.
We must show them we care.

And if that doesn't work, we should fire up Old Sparky.

My uncle was shot through the head at 23 for being in the wrong place and the wrong time, substituting for m grandfather one morning on a newspaper truck delivery route in the Rockaways and southern Nassau. He was buried Christmas Eve. His widow delivered their only child two weeks later. A few years back I checked into the young men, both around 20 at the time of the shooting. They'd killed another man the same day.

They were sadistic. My uncle was wounded through the chest first and then they dared each other to finish him off while he told them he was soon to be a father. He had a chance to survive and asked them to give that to him.

One was released 15 years into his sentence and the other six years later. I was stunned to find that neither had so much as a spot on his record since -- two decades at that point.

I know little about reform, and perhaps aging helps dull our worst impulses. But it gave me some hope that even the worst of us can step back from that abyss of cruelty.

In many ways my family never healed. But one blessing is that his death day is now by coincidence the birthday of my mother's first granddaughter -- a little girl my brother adopted from China. Now my mother smiles instead of crying on that day.

I grew up in the ripple of the murder. In a very real way it led to my mother's early marriage, and so my existence. But the immediacy of trauma came to me a few years ago, in March, when a young man of 22 was murdered on Queens Plaza. Gunfire rang out and I ran downstairs and around the corner to the sound of shots (I guessed the direction as best I could). I arrived at just the same moment as the cops. His heart was apparently beating but his eyes were blazed over and unmoving, looking into the light rain coming down. His murderer, with whom he argued at the now-defunct Club Blis, was never caught. He was a good kid -- no record, and the grandson of a cop. He'd walked away from a fight and was shot because turning his back on the aggressor was taken as disrespect (and I'm sure chemicals were involved, even if just alcohol).

His mother became a gun control advocate. I hope she gained strength and solace from turning grief into meaningful action.

Many more soccer fields, coaches/mentors and community involement/acceptance might save these lost boys.

I think you left out "5 Pointz", cuz if we ain't gotz no proper area for all da potenshul Da Vincis in da hood, then dis society be all lost and shit....

Mabye if these young hoodlums in training had fathers in their lives instead of sperm donors/"babby daddies", the results might be different.

But you aren't willing to bring up the obvious solution.

And about two years ago, at a civic association meeting, I asked the captain of the 109th precinct (who attended) if there was a problem with "MS 13" in Flushing.

He said no...though I informed him of their gang graffiti tags running clear through Flushing.

That top cop either gave me an ignorant answer or it was an out and out lie!

The United States has more people per capita locked up in prison then any other country in modern history. And 38 states, 76% of the Country has Capital Punishment and kills bad people. Clearly some of the commenters think that this tried over and over solution is working. They must be insane according to Einstein.

Insanity: doing the same thing over and over again and expecting different results.
Albert Einstein

I spotted an MS 13 gang tag in the men's room at Kanes Diner on College Point B'lvd. about 4 years ago.

Yes, because when people come here to rape a murder and are successful at it, we should let them go and put them in an afterschool program.

Grind up that Mara Salvatrucha hombre for dog food!

Any indication where this guy was born? If not in the US, is he here legally?

Mabye if these young hoodlums in training had fathers in their lives instead of sperm donors/"babby daddies", the results might be different.

They have fathers, their fathers are in the same gang!

Many more soccer fields, coaches/mentors and community involement/acceptance might save these lost boys. You can't just lock them away forever, or ignore it and hope it goes away. We will pay for it one way or the other, so we might as well just fix the problem and try and save these lost boys

actually, more fields is a bad idea. this gang conducts biz on local soccer fields, pretending they are really there to kick the ball around. Saw this on a doc pertaining to these fellas... good intentions eh?

"Yes, because when people come here to rape a murder and are successful at it"

Maybe we can give them jobs as self-defense instructors or some type of informative way on how to protect people from THEMSELVES!!!

Insanity: doing the same thing over and over again and expecting different results.

So we should simply keep the borders open and bring in more!

Doing the same thing over and over?

"when they ass rape him. ENJOY life behind bars."

If he gets raped in prison, he will sue the guards for not protecting him. Prisons come with a cost.

You have 1 million more of these guys seeding up in City schools right now.
These Hispanic and Mexican gangs are dominantly all children of low class illegal immigrant feral animals from the pueblos and hills who let them grow up on the street and don't give a shit.
Nothing will change these people, its only going to get worse.
Ask any public school teacher what goes on in the classroom and households of all these unwanted cash anchor babies.

We should all wear red hoodies now in solidarity with the unfortunate victim.

We also must try to understand the religious motives of this killing.

STERILIZATION IS THE ANSWER THERE ARE 5 BILLION PEOPLE TOO MANY ON THIS PLANET WE NEED TO TAKE ACTION & START ELIMINATION NOW!!! THE DESTRUCTION OF THIS PLANET CAN NO LONGER CONTINUE STOP MAKING BABIES!

Gang activity is prevalent, this victim was certainly at the wrong place at the wrong time and apparently wearing the wrong outfit.

There are more Latin Kings in College Point then MS13.

what's the likelihood of them killing each other off?

Does anyone know where exactly in Flushing the murder took place? I'm just curious. and btw, I sense a few racist undertones in a small # of comments. It's not nice...you know who you are. Judge ppl as individuals not as a group.

A large number of special education students I see come from this demographic. When kids tell me their dads work in "construction", I know their dads are waiting on the street corner every morning for day laborer work. They have lives bereft of parents, who work until 7 or later in the evening. These kids are most vulnerable to join gangs, but they express fear about them at the same time.

I'll give it to you with overtones...both barrels!

If you love the "brown folk" so much, why not live next door to a Latin Kings or MS 13 safe house?

It's always the "white" liberals who love the "brothers" in Corona so much but choose to reside in Scarsdale.

I'd be willing to let my tax dollars go to building more soccer fields if the teams will play with some of these criminals heads!

The gang member in the photo of this story is good looking. I would love to fuck his ass!

Thank the Democratic Machine. They opened the borders for tweeding.

Knocked out their own base of working class, unions, solid communities.

Now the Republicans love this guy - cheap labor, etc and when they act up everyone can point their fingers at the Democrats cause he not only fills their demographic, but he is here because of them.