SROs have to go 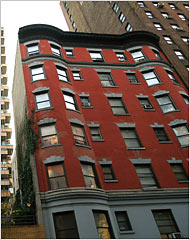 Three single-room-occupancy apartment buildings on the Upper West Side that were renting rooms to tourists will no longer be taking reservations. On Tuesday, a State Supreme Court justice granted the city a preliminary injunction, blocking the buildings from being used as cheap tourist hotels.

Wow, great. Maybe the city will also seek a preliminary injunction against all the houses in Queens illegally converted into SROs to hide illegals. Maybe I'll win the lottery this week, too.
Posted by Queens Crapper at 6:41 AM

Yeah....maybe the city should take some action
on those 4 Korean illegal B &Bs
operating in and around the 161st Street area
between Northern Blv'd and 35th Ave in Flushing.

Will that be before or after pigs can fly ?

This is great. Like power plants and immigrants, Manhattan is shedding all those things it doesn't want and sends them to Queens confident that

1. our politicians will tell everyone its great (80% will go along because ... well this is Queens, no?)

2. the newspapers will report every development in glowing terms (waste recycling facility? rail transfer yard? power plant? queens crap? hey as long as a politician says its ok we will just repeat what they give us to print - see point 1)

3. the city-wide preservation movement will say nothing useful to us (as in their little secretive whispering style) and to ensure that we go along, encourage groups like those local homegrown types of 2nd stringers on that shadowy Four Burros to tell us 'its a done deal' and, most importantly, will keep us provincial, isolated and most importantly, quiet.

42-03 saull st flushing, illegal hotel,with illegal 3rd floor and bakyard that was built on to acomodate more asians, black suv parked where the front yard was, is used to pick them up at la guardia, owner always sits on stoop working on his lung cancer.

Wonderful. Now there will be no place to stay when visiting NY except those $400-a-night dumps that pass as hotel rooms in Manhattan. I visited NY last month and the only semi-decent place we could find was a Ramada on 27th street and Lexington for $275 a night. Hotels in NY are a frickin' scandal!

It is a disgrace how a) Manhattan is shedding affordable everything; b) Queens is the dumping ground for most low-wage, low-aspiration, and low-hope arrivals. However, Thank God we're here and can watch our borough turned into an off-shore maquiladora and dormitory for Manhattan.

Since we're discussing ethnicity, what's the ethnicity of the people running the three closed SROs?

And how is this relevant?

Queens is the dumping ground for most low-wage, low-aspiration, and low-hope arrivals.

A large block are bright enough to use this as a stepping stone on to somewhere else.

Ah, the immigrants are a politicians dream - been that way for generations. No wonder they always seem to work themselves in a lather whenever one shows up.

Since we're going "vintage"......"Mr. Chan".....
the proper racist term in use
during the time frame of this legendary Oriental sleuth was "yellow peril".

Those 4 open (not 3 closed)
and doing business B&Bs
happen to be run by Asians.
If they had been run , for example,
by Italians, Irish or Latinos......
this also would have been noted.

I sympathize with those who think there are possible latent Yellow Peril sentiments, for as "Charlie Chan" asked, who are the owners of the SROs and why isn't their ethnicity being noted??

That said, illegal subdivisions, B&B operations, and SROs-as-cheap-tourist-hotels cheat the city and endanger neighbors. So government definitely needs to crack down, but all those yapping about Asians should try ranting about some other ethnic groups and their real estate dealings -- if they have the guts or aren't so ignorant about what goes on behind the scenes....