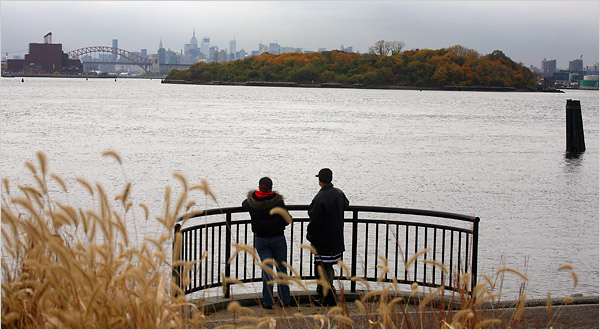 South Brother may have been a base for Union soldiers during the Civil War, and in about 1894, the island was purchased by Jacob Ruppert Jr., a brewing magnate who bought the Yankees... Ruppert built a yacht house on South Brother, and amateur baseball games were held on an adjacent field. Legend has it that Ruth would occasionally show up to practice his swing, swatting balls far into the East River.

After Ruppert’s summer home burned down in 1909, South Brother went through another long fallow period. The island changed hands several more times until 1975, when Hampton Scows bought it for $10.

But South Brother, the last East River island of any significant size to remain in private hands, will finally get its due today when it is formally transferred to the city as part of a complex $2 million deal brokered by the Trust for Public Land and financed with federal money secured by United States Representative José E. Serrano.

In addition to several types of herons, the island’s bird population includes ibises, oyster catchers, cormorants and egrets. In its forest are locust, white mulberry and black cherry trees, covered by thick tangles of oriental bittersweet vines that cover trees and ground alike. Because there are no predators on the island, many birds build their nests on the ground.

New York's South Brother Island to be a sanctuary

"You know the way New York is," Serrano said. "Eventually, somebody would have bought it and decided to tear it all up. ... We can have one place in the great metropolis to see how it used to be."

Now that Parks has gotten their hands on it they'll probably declare it to be underdeveloped, pave the whole thing over and install astroturf there pronto. And what's with the piece of fence at Barretto Point Park? Doesn't the rest of the shore need it too?
Posted by Queens Crapper at 12:18 AM

The island was acquired with funding from a federal government grant which stipulates it remain a natural area.

to the above commenter,

we would all like to think that should be the final word, but go back and read the times article linked in the post, the anonymous city official is quoted saying it would "most likely be left as it is". What's your definition of "most likely"?

parnell said...
This comment has been removed by the author.
Tuesday, November 20, 2007

Gee....the St. Saviour's was a bird and small animal sanctuary before "Pinky's" henchmen destroyed their habitat!

How about NYC acquiring this most important site....
duh ?

I have been on N and S (pre 911) Brother along with birds the Island is infested with Hornets, termites and spiders.
Its like being in a differnt world !