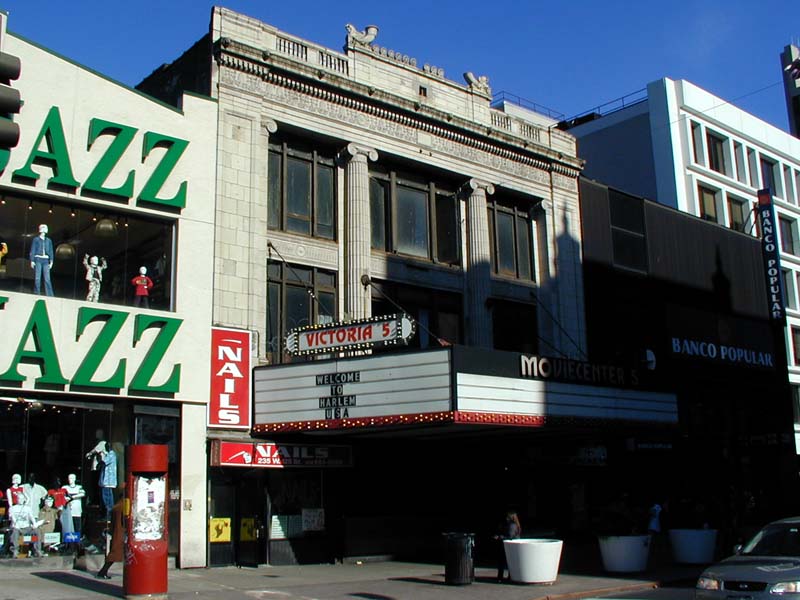 After years of delay and political squabbling, state officials have selected Danforth Development Partners to redevelop the long-vacant Victoria Theater on 125th Street, once Harlem’s largest and most elegant theater. Danforth plans to transform the Victoria into a cultural center, with two live theaters, space for the Jazz Museum of Harlem, a 200-room hotel and 91 condominiums. The theaters would be used primarily by the Classical Theater of Harlem and the Harlem Arts Alliance. Danforth, a Harlem-based developer, said it would restore the Victoria’s Ionic columns, terra cotta rosettes and other historic elements.

Photo from Wired New York
Posted by Queens Crapper at 7:08 AM

would be neat if they did something similar with the RKO, w/o the condos of course.

Thanks Ken for your concern....
but the "fix" has been in
for too long a time with the RKO.

I'm afraid, eventually, it might be the final curtain for the Keith's if something isn't done PDQ.

There's just so long a building (even as tough
as this one has proven) to continue to be subject to
neglect and survive.

There will, no doubt, be dancing in the aisles
by some of CB# 7's members
(and probably Myra Herce)
if the Keith's gets un-landmarked
and torn down.

It's been a thorn in their side for over two decades
and holding back development of the
"New Flushing"(Though they'll never admit to this publicly) !

You see if this was Queens it would be torn down for a section 8 hotel. The clueless local civic would be bellowing empty threats with a cheerleader ... who is the same person responsible for the travesty.

Funny how a historic building in Manhattan is restored (with architectual details intact). In Queens we always hear how 'its too far gone' with the preservation community glumly silent.

Of course, moneys from advocacy groups are available for this in Manhattan.

The local talent in Queens says nothing or is not even aware of this. They are just happy to be invited to a preservation whine and cheeze event and want to keep their credibility on that 'B' list intact, so no protesting or probing too deeply now!

Yeah, I'm not sure I'd hold the Victoria up as a typical Manhattan success story. What I've read is that the two theatres will seat 199 and 99 people, respectively, even though the Victoria supposedly once sat 2000. In other words, the same amount of theatre seats as projected hotel rooms and condos!

Queens theaters should be the ultimate priority for landmarking. They are all community fixtures regardless of whether or not they are altered. There are so few left. Better get movin'!

This Harlem theater isn't being revamped for the people of color who live there.

This will be one of the keystones for the Vanilla-fication of the area......
and the Dept. of City Planning knows full well of this !

Columbia University will do the rest.....eh?

That old Black magic doesn't seem to hold the power that it used to have.....does it?

Sorry folks.....I want my hot cocoa to be dark and rich !

Remember all those clear (White) Pepsi Colas
and other soda drinks tried some years ago?

Sodawater without color.
How do a man know what's he's drinkin' ?

They were a big bust!

Look, the guy they've selected for the Victoria, Steve Williams, has been in Harlem his whole life. At least this project has a real chance of being of use to the community. From what I understand, there are three or four Harlem-based cultural institutions who'll have homes there. Have you ever seen the Victoria on the inside? It's pretty much a disaster. It seems to me that they are doing the best they can to keep the theater's historic details while upgrading and making the building actually useful again. It could be great - two theaters in the Victoria, and the Apollo just a couple of doors away.

What about the theater and ballroom
where Malcolm X was assassinated ?

Was it ever designated an NYC landmark ?

We are trading a grand historic Vaudeville theatre- 2395 seat venue for two 200 seat auditoriums plus they will throw in some space for: The Harlem Arts Alliance, the Classical Theater of Harlem, and the National Jazz Museum. Whoppee Doo! Renting or giving?...Hmmm

"It's the white elephant that no one can afford to rent, because it's too damn big," said Curtis Archer, president of the Harlem Community Development Corp.

That is the irresponsible comment from a community leader. I would not follow him over the cliff...

If Lincoln Center and City Center takes grants and endowments to stay alive, why not the Victoria? Is Harlem and Harlemites so lowly and discarded? I think not! We can play too- with magnificence and grandeur. All that the world celebrates of our richness, art and culture.

We will no longer be the "object of entertainment." We will take stakes and be franchised in it? We will produce, own and profit for ourselves.

I suggest decline these "NICE" sounding morsels that will have us forsaken the prize.

"SAY NO TO" ESDC , HSDC and Danforth Development Partners. We decline to give away to you or anyone:
our dignity;
our jewels;
our legacy;
our history;
our today;
and... our tomorrow!

As an alternative approach, I suggest that Harlemites take a look at a better thought out proposal found at- http://www.haarlemvictoria.com.

It would be a shame to loose the Victoria- a big piece of Harlem History in exchange for a few bones thrown to the Harlem community to build a coupla matchbox auditoriums and s’more hi-priced condominiums.