They built a hotel where? 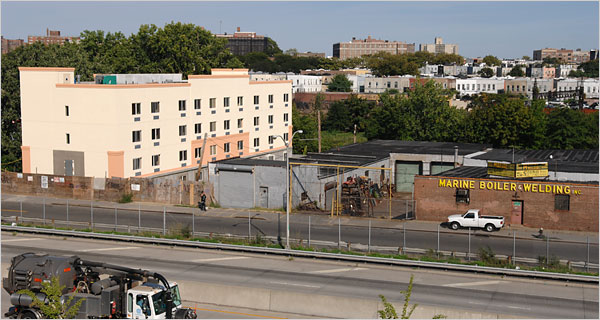 There are no heralded restaurants or strobe-lit nightclubs nearby. The area has no tourist attractions. Finding a yellow cab would be akin to spotting a U.F.O.

Still, a hotel is in the final stage of construction in a remote stretch of Hunts Point, wedged between the Sheridan Expressway and the Bronx River. Neighbors of the four-story, butter yellow building, which will have at least 60 rooms, include a body repair shop, a boiler repair outfit and a junkyard.

But rather than hailing the hotel as an economic boon to the gritty industrial area, community leaders wish it would simply go away.

The hotel, which is on a service road leading to the expressway, was built legally under existing zoning regulations. But Mr. Gonzalez of the community board hopes that it will never be allowed to open. “We’ve worked for too many years to change the borough’s image to allow a hotel that would detract from that,” he said.

Raised Eyebrows for a Hotel on the Outskirts

But it's just off the highway. People will stay here on airport layovers, when they visit their families or go to a wedding. There is a residential area shown in the background just a couple of blocks away. This will improve a blighted area!

Sorry, I was thinking like a Curbed commenter for a moment. Heh.
Posted by Queens Crapper at 9:35 AM

Maybe they studied the play book from Queens...

Stuff like that is just what our community needs (not parks, not schools, not hospitals)

The users of those are losers who don't pay the politicans to get elected like the developers.

Paying taxes are not enough these days to get 'serviced' or 'services.'

So where is a guy going to go to hook up with his ho.

Now it is exported to the outerboroughs.

Interesting if one of those noxious Columbia journalism students looks into this and publishes it.

While our politicians, civics, and media outlets slept.

Clamping down on that stuff impairs tweeding, so not a high priority perhaps?

A new crystal meth lab (don't mind the smell).....
or a place for concluding drug deals?

reminds me of that honeymooners episode in which ralph and norton invest in some sort of business along a proposed highway only to find that there issn't going to be a nearby exit ramp.