Long-time homeowners at a loss 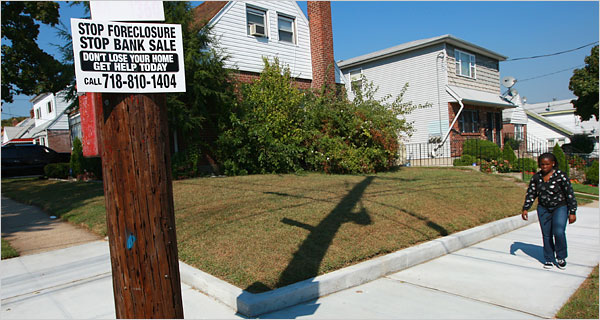 The Johnson sisters thought they were safe; their father paid off the house before he died in 1995. But hard times began five years later, when their mother, who had only limited health insurance, took out a loan on the house to help pay for her double-bypass surgery. She died the next year, and three years ago, in 2004, Lisa Johnson decided to refinance the mortgage.

To this day, she does not understand exactly what happened, but somehow the refinanced mortgage ended up costing the family $2,700 a month. With Chantée’s pay as a bus driver and Lisa’s as a data-entry clerk and a production assistant for a clothing firm, the sisters could not handle the payments. They defaulted on the mortgage last fall.

“Sometimes,” Lisa Johnson said ruefully, “ignorance can get you in a lot of trouble.”

Stranger at the Door

"Last year at this time, you were seeing 60, maybe 70 max," she said. "It's troubling, and we have no way of knowing when that's going to start slowing down."

Photo from NY Times
Posted by Queens Crapper at 12:30 AM

Beware! There's a lot of $$$$$$$$$$
to be made at both ends
(and anywhere in the middle)
starting with the shameless lenders
who offered sub prime mortgages to begin with
and these "foreclosure rescuers"
who claim to be aiding you in your time of distress.

One such private mortgage broker
recently complained of how bad business had become for him and immediately announced
that he was getting out of lending and into the foreclosure business.

Whatever that may be.....
he'll continue to make a fortune
while those less fortunate will loose their shirts
along with their homes !

I can't sympathize much with people who take out loans without understanding the terms. Unethical mortgage brokers and lenders should be regulated, but you ultimately have to be responsible for knowing what you are committing to when you sign a loan agreement.

In other words, some people may never be able to afford a home, and are condemned to live out their lives in apartments.

Do you think that every person is entitled to be able to buy a big house at whatever price they can afford? That is a dangerous statement in a free society. I wouldn't call living in an apartment as being "condemned." Beside, this article was about people that already owned a house and took a loan on it.

Hey.....
these people who signed on the dotted line
may not have been the sharpest tools on the bench.

But have you no heart sir?

How would you feel
if you found yourself tossed out
of your home, condo or apartment?

You really need to
take a good look at yourself in the mirror !

If you're not ashamed of yourself.....
I'm ashamed for you!