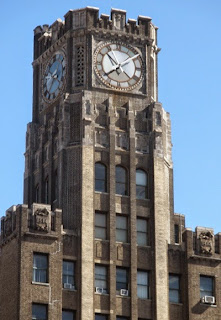 The decision is finally in, and the beloved Clock Tower in Long Island City is not going anywhere.

On Tuesday the city’s Landmarks Preservation Commission voted unanimously to landmark the 11-story tower in Queens Plaza, formerly the Bank of the Manhattan Company building.

“For nearly a century, the Queens Clock Tower building has been one of Long Island City’s most recognizable structures, greeting hundreds of thousands of commuters as they enter the borough,” said Landmarks Preservation Commission Chair Meenakshi Srinivasan. “The commission is proud to recognize this iconic building, which represents a significant period of development in Long Island City.”

It's funny how all of the news reports about landmarking this building fail to mention the real reason why it was designated. AIR RIGHTS.
Posted by Queens Crapper at 12:35 AM

In a statement released by the Landmarks Preservation Commission, Chair Meenakshi Srinivasan said, “For nearly a century, the Queens Clock Tower building has been one of Long Island City’s most recognizable structures, greeting hundreds of thousands of commuters as they enter the borough. The Commission is proud to recognize this iconic building, which represents a significant period of development in Long Island City.”
----
(When you see anything political use the word "proud" its time to run to the hills.)

But they called the 17th century Dutch Kills Millstones, a few steps away, “decorative sidewalk” unworthy of designation probably after calling Vallone and Van Bramer’s offices.

What is the latest with those?

When I see these callow-faced interlopers come in here and dictate to us what is important, to jump the line while others in places like Richmond Hill are denied their rights to enjoying the legal rights of Landmarks that others enjoy, it really points up that the law must be overturned.

Frankly, I don't give two shits about the Village, West Side, Brooklyn Heights. When they are in our boat, then maybe we can start to row forward.

What's the point? It will be engulfed in a canyon of steel, brick and mortar. A needle in a haystack has been reclaimed. Let us rejoice. Steinway mansion has been raped! RKO Keith's Flushing will be obliterated soon. St. Saviour's church sits In a container...ahem...someday (???) to be reassembled.. Yadda, yadda, yadda!

Queens is number four down the list of all five boroughs when it comes to individual and historic district landmark designations.

Well, at least, this latest morsel tossed us is progress.

A story on what happens when someone FROM Queens actually tries to get something protected in their commuunity.

[To refresh your memory, way of contrast check out the profile of the 2 gents a few weeks back who were leading the effort to designate the Clock Tower]


One of the first indications that Jimmy Van Bramer had turned against the community was when he refused to show up at the community rally to save the Millstones having a staffer cancel his attendance.

It seemed that he listened to his former employer, the now disgraced library honcho Stamatiades who ran the civic in Dutch Kills, a community that has suffered the same unfortunate fate as Hunters Point by being thrown to developers by their politicians.

(BTW After Stamatiades, who did attend the community meeting and asked "whats the big deal - they are just rocks" an aid to Cong. Moloney (or should we say 'Money') stood up and stated support for him and should he need help to contact her.)

As they tell you in places like HDC, you should "go around to you politicians" to plead your case. Someone in Bayside did that and got intellegent responses from their local officials. When he did the same for western Queens, silence.

Not a single politician sat down to discuss the millstones. Interns politely gave 20 minutes until they started looking at their watches. A chief of staff wanted to know what the big deal was, but then, again, she admitted to never stepping foot in Central Park.

When the historical society went ahead to submit an application, it was rejected with the language of "decorative sidewalks." Museum professionals in Albany thought the designation odd but followed the unwritten law of never interfering with a serf in a politician's district.

The historical society's funding, as threatened, was terminated for doing their job by a young fellow who tells everyone he is a cultural maven while he funds mediocrities whose greatest arts credential is to be friendly to someone who has money that thinks he is an cultural maven.

Okay you say. What of the millstones?

The hue and cry of them being in a construction site did not get them even temporarily placed in a museum setting where the could have been studied and put on display.

No, they were moved to a corner in a local library branch (perhaps wasting valuable library funds to prove a point - remember the Van Bramer - Stamtiades connection here)

(And no, Jimmy did not intervene to calm both sides as one blogger recently reported - when people look for support they often let facts get in the way)

Since that time Dutch Kills pieces have fallen off (and crudely glued back), they were covered in graffiti, people been observed sitting and jumping on them, the Q-102 bus several times an hour roles by within 5 feet (spaying salt and snow on them in the winter), and as of last week, someone discovered holes are being drilled in them.

Everyone from Parks to NYC EDC hinted after this sorry record (reported in the Daily News etc) that it might have been a bad idea to leave them here.


I for one will not be dancing a jig over the Clock Tower Building, something that was never really in danger in the first place - and whose lobby would have made a stunning arts center but was jack hammered because the owner did not like nonprofits.

The law cannot be overturned. It has been reaffirmed many times in the US Supreme Court.

However there could be a case made for the inequitable application of that law! In other words, I smell prejudice on the part of the LPC!

Now go find yourself a pro bono mouthpiece. and sue them.
I have heard you mouthing off about dumping the landmarks law for at least five years, whoever you might be.
Get real fella. Venting does nothing. A good lawsuit accomplishes more. Ah, but starting one requires more work than wathing TV in an armchair, eh?

What about Broadway Flushing?
This state and national register neighborhood
well deserves municipal landmark status as well.
If our nabe has been deemed good enough for the federal government...WTF is holding up the LPC?

Another bone tossed to the Queens dogs.
We get table scraps compared to the other boroughs.
Why is this?
It's simple.
Borough hall and 99% of our elected officials are anti landmarking.
They get too much money from developers.
And that's the way it is, folks.

True! As long as you have crooks like the Vallones we will be nowhere. Steinway mansion is their shame.

All a pol has to do is get some old lady's pet tabby out of a tree, or provide fireworks for the fourth, and they are heros and benefactors to their districts.

Never mind that they have their hands in your pockets. Paul Vallone is such a nice guy...a father....a church goer, and soccer team coach.

Grandma, what big teeth you have . Forget that Don Chooch is a developers' lobbyist.

Pete "junior" Vallone put the finishing touches on ruining Astoria that his father and grand dad did decades ago.

+Partners will be continuing its advocacy efforts in Long Island City. Earlier this year, +Partners was awarded a grant from the Historic Districts Council through their Six to Celebrate program.

+Partners will be working throughout the year to create a public-facing survey of the industrial architecture of Long Island City.

This survey will help identify the area’s most notable examples of industrial and warehouse architecture, and provide the foundation for future landmark campaigns.

As one of the most defining architectural typologies of the area, industrial architecture has long served a unique role in the cultural and economic development of Long Island City.
^^^^^^^^^^^^^^^^
Hey Richmond Hill, Bayside, College Point, Jamaica, follow the lead of these guys and get a grant from HDC!

Better yet, if you see their resumes, they are most experienced in neighborhood preservation. Get in touch with them and ask them to help YOUR efforts!

i dont think this was exclusively about air rights. seems like a win win for me. if my memory serves me the developer owns both lots they could tear this down and get the floor area when they unify the lots. but instead theyll scoop up the floor area by sale keep this standing and do a reno on it. cheaper compared to if they were to demo it and add to the top of the tower and we keep the clock tower. i dunno, gotta live with the outcome and live to fight another battle imo.

Since I almost never wear a watch, I would glance up at this building in the morning to see if I was running on time for work.

On the way home, I would check it again. Since they didn't have cell phones back in the 70s, I had no way to let my wife know whether I would be home in time for dinner, or if I was going to get yelled at for being late.

Only kidding, of course, but I am glad that at least one thing I remember from my youth is still around, and hopefully will be for a long time....

Funny the clock was off for years. Now the Long Island Savings Bank - time and temp - THATS missed.

Understand our two friends are on a secret mission with their work. Really. I just wonder if the landmarks law will now be used to maximize development with a wholesale transfer of air rights while the purpose of the law, protecting communities will be ignored in Queens.

But the powers to be are busy saying all sorts of positive spin on that building - it will now be the must be topic of Queens Plaza - the first thing on everyone's lips while the millstones, useless to developers, remain ignored and mistreated in plain sight.

Well I guess the rest of you looking for landmarking in Queens can now forget it as these well-connected boys will fill the docket for the borough.

Not even from Queens. Funny....

I don't understand the connection how the landmarking was necessary for the air rights. Can anyone explain?