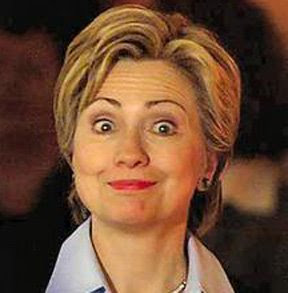 Sen. Hillary Clinton, who was President-elect Barack Obama’s leading rival for the Democratic presidential nomination, is being considered for the job of secretary of state in the Obama administration, sources with knowledge of the transition process tell ABC News.

Discussions about Clinton, D-N.Y., being asked to accept the post are "very serious," an Obama source says.

Secretary of State Hillary Clinton? It's Being Considered
Posted by Queens Crapper at 12:14 AM

Let get a Rockerfeller type Republican in her wake. Good riddance to Hillary what has she actually done for you other than to run for Presidency on your time?

I was so hoping Obama would pick Hillary. She is the perfect choice. I have a feeling this country will finally be in good hands.

Now where's all my fellow conservative bloggers who are ready to pounce on me?

He wants to keep
Lady Macbeth Clinton close at hand
so he can keep an eye on her
and within arm's reach.

Hillary (or Billary):
"Is this a dagger (pistol) I see before me. Come let me clutch thee".

Keep your friends close and your enemies closer!

Now if arrangements can be made to make Bloomberg Secretary of The Treasury, we'd be rid of that Boston bastard for good!

I think she did a great job although I did not agree with all her decisions. Before you become to critical,of our present Senators remember Al Damato he was one unethical SOB.

HA! Exactly what I was thinking when I heard the news this morning. I also wonder what exactly has she done for NY other than use it as a launching pad for the presidency. Even though I almost always disagree with Senator Schumer at least you see signs of life now and then. Please Hillary, ride off into the Washington sunset and leave the welfare of New York in the hands of people who actually care about it.

You don't have to follow politics too carefully to know the Clinton's have rockstar status in New York.

On a serious note, can someone please list just a few of Hillary's accomplishments while in the Senate?

I'm wondering if I should be sorry to see her go or not.

She has done a lot for labor union disputes and for 9/11 money where she used her influence to get us support that we normally wouldn't have. She is actually done a lot and she and Schumer have carved different spheres on a lot of things. She has also been working hard on environmental justice issues.

Thanks for the feedback but your comments seems a little a vague.

Politicians are masterful at creating the preception that they are working for all of us when in reality all they do is show up a press functions for a little face time.

9/11 was one of the most tragic times of our history but I think its time politicians stop referring to it as a way to advance their agendas.

Again, thanks for the feedback but I don't see how NY'ers have benefited from Hillary as our Senator.

Hillary has done alot for the western part of the state that has suffered due to the loss of industry. She has gotten alot of federal funds to help promote tourism along the Erie Canal and other parts of western NY. Although I don't always agree with her she has done alot for the WHOLE state. I personaly would like to see her saty. She certainly done more than Chuck, who has been bought out by wall street.

Now where's all my fellow conservative bloggers who are ready to pounce on me?

Well, here's what another Italian girl, Camille Paglia, had to say about Obama's choice for VP:

Hillary for veep? Are you mad? What party nominee worth his salt would chain himself to a traveling circus like the Bill and Hillary Show? If the sulky bearded lady wasn't biting the new president’s leg, the oafish carnival barker would be sending in the clowns to lure all the young ladies into back-of-the-tent sword-swallowing. It would be a seamy orgy of scheming and screwing. Hillary could never be content with second place. But neither could an alpha male like Obama. The vice-president should be an accomplished but subordinate personality. An Obama-Hillary ticket might tickle party regulars, but it would be a big fat minus in the general election. Republicans have shrewdly stockpiled a mammoth arsenal of past scandals to strafe Hillary with. Only a sentimental masochist would want to relive the tawdry 1990s.

Now, VP is quite different than Obama nominating Hillary to a mere cabinet post. But I think Ms. Paglia's comments are equally applicable in this case.

Not that I wouldn't like to see Hillary leave! Maybe Obama could nominate Hillary as ambassador to Saudi Arabia? That would REALLY piss off the "religion of peace"!!

wade
I didn't like Hillary as a VP pick. If anything, I was hoping for a Clinton/Obama ticket. But I think Secretary of State is just her thing. The hell is finally over. And I have no problem reliving the 90's. Good times.

Now will someone pu-leeze make Sarah Palin go away.

If Ron Paul and Pat Buchanan were 15 years younger, they could win the 2012 presidential election. I guess by 2012 America would finally be ripe (rotten?) enough for their ideas. Yes, Buchanan is a homophobe and Paul is pro-choice, but it's the economy that matters, not these little insignificant issues.

I guess by 2012 America would finally be ripe (rotten?) enough for their ideas.

Unfortunately, Paul and Buchanan make too much logical sense for the average American who's addicted to government hand-outs and various other social programs.

Plus, demographic trends aren't really favorable for 2 white guys on a political ticket either. If you could convince Thomas Sowell and Walter Williams to run on a joint President/VP ticket, I'd gladly donate thousands of $$$ and hours of time for these two intellectual giants. But again, they make too much sense, and the average American can't really comprehend what the hell they're really about. Just pass me my welfare check, government bail out money, sub prime loan, flat screen TV, and give me warm fuzzy feelings about Obama, thank you very much!

"Just pass me my welfare check, government bail out money, sub prime loan, flat screen TV, and give me warm fuzzy feelings about Obama, thank you very much!"

Wade, you're going to love Obama. Trust me. I think Republicans are all suffering post-election stress disorder. Why don't you give the guy a chance?

Take her, please! What has she done for us? NOTHING! So she got the state 9/11 funds - do you really think we wouldn't have gotten anything if it wasn't for her? Please!

Tourism along the Erie Canal? Waste of money. Labor union disputes? Who? Where? She didn't do much for the PBA or the UFA - members of both are still grossly underpaid and can't afford to buy homes in the city they protect.

Someone please show me something significant this carpetbagging bitch has done for NY State.

A muslim & a socialist. Awesome!

Ron paul is pro life,he's a OBGYN but he just figures the government shouldnt tell you what to do

From Wikipedia
Walter Williams
He also believes in the right of U.S. states to secede from the union as several states attempted to do during the Civil War. Williams has supported or been sympathetic toward various secessionist ideas in his writings.

Wade you speak as if Daddy was rich and you married buck$. The rest of have to earn our money ... without flirting.

--Hillary to the Cabinet

Unfortunately, Paul and Buchanan make too much logical sense for the average American who's addicted to government hand-outs and various other social programs.
Wow! for once i agree with Wade.Yes Ron Paul would be great and he is a honest smart man, especially economics and foreign policy.There is some great videos of R Paul on Brasscheck video.Very very bad choice Obama made choosing his friend Rahm Emanuel.Hes a staunch zionist and his father is connected to Deir Yassin the horrible massacre of unarmed Palestinians in the creation of israel removing Palestinian cities that have been there for thousands of years.Obama is just republican light.