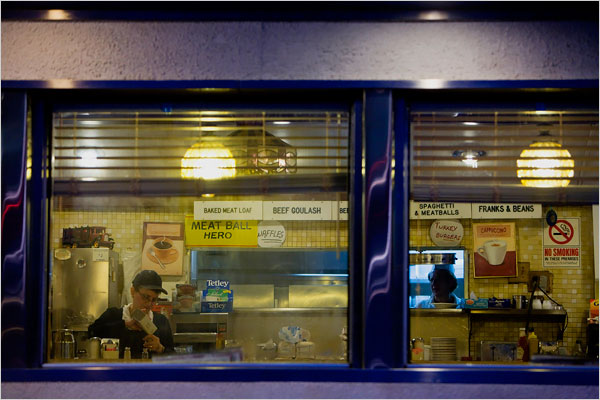 This space-age-style diner, which was renovated in 1965 and is most famous for being a location in Martin Scorsese’s 1990 movie “Goodfellas,” has been a favorite of local and long-haul truck drivers, some of whom have been stopping by since the 1940s. The 1997 and 1998 editions of the Guide to America’s Best Truck Stop Diners, a handbook published by Vivarin, a maker of caffeine pills, ranked it the nation’s second-best diner for truckers.

Lately, though, many drivers have been avoiding the diner because of an uptick in parking tickets on nearby streets.

Smokey and the Truckers

The community groups want the trucks off residential streets, not Rust Street...
Posted by Queens Crapper at 12:30 AM

How touching. The New York Times is concerned about truck drivers and whether they can get a good meal without being harassed by the police.

The NYT found it too troublesome to speak to the police, the area residents, or members of the community groups to oh, let's just say, add some depth to this sentimental story.

Where was the concern for hardworking people when just a block or so away from the diner is a piece of land that the hardworking, taxpaying, citizens and residents of the area wanted converted to a park, instead of another miserable, dismal and ugly developer's nightmare of "affordable" shithouses for people the Commissar detests?

Where was the curiosity of the NYT reporter for the residents' reasons for wanting trucks off the residential streets at night and weekends?

Where was the curiosity of the NYT reporter as to why Commissar Death and Taxes has treated this area of Maspeth the same way the city has treated Willets Point for so many years? What are the C D&T's eminent domain plans for this part of Maspeth?

No wonder shareholders of NYT stock can look for zero or near zero dividends this year. It stopped being a newspaper years ago and long ago switch to being a house organ for the political degenerates.

But, I like that it's there and I support diners: too many are being demolished or used as ironic props, with "upgraded" menus that the local bourgeoisie will approve, in developers' schemes, as I fear the Cheyenne will be in Red Hook.

The Times' financial collapse might in part be due to the extra snark lathered onto its political opinionating from Dowd, Rich etc. It did not read well.

"The Transportation Department has installed thousands of signs and held community meetings about truck traffic."

Where? When? How? We've been asking for signs diverting trucks off Grand for years, and they haven't done it.

You can't avoid driving on Grand if you drive a truck. You need to deliver all good and services.,etc: food, medical care,FLOWERS!,.We all live in an area that happens to have an industrial park nearby. Except it. People's job's are at stake. The Diner, well Most Diner food suck's, but the place does have a retro charm. I choose not to eat diner food.

No one is talking about deliveries, dingaling. The road is being used as a thru truck route instead of a local one.

And did the New York Times
grab a cup of "Joe" to go and visit the nearby historic denuded former St. Saviour's site?

The NYPD and DOT did a great job. They ticket the trucks in the isolated industrial area of Maspeth and push them to drive around in areas like Grand Ave closer to the neigboring residential areas. They could have left the trucks in the industrial area away from the homes.
The Diner is great. I love their breakfast, epecially their western omelet and pancakes.
All the movie stuff is great too.
Maspeth Resident.

This just shows you how screwed up things are in the city. They harass hard working truck drivers, instead of going after real criminals. Pretty soon there won't be that many jobs for truckers. Just another sign that our economy is so messed up. Over 97% of everything we use in NYC is brought to our businesses, schools and homes on trucks for us to purchase and use. What would we do if the trucks stopped bringing food, clothes and household goods to us in NYC? WE WOULD STARVE.
This is not about a meal. This is a sign that there are less trucks coming to NYC with food and other goods for you and me. AND BUSINESSES ARE CLOSING AND PEOPLE ARE LOSING THEIR JOBS. WE ARE IN A RECESSION!! WE SHOULD SUPPORT ALL BUSINNESSES OR ELSE PEOPLE WOULD BE UNEMPLOYED AND ON WELFARE. THEN OUR TAX DOLLARS WOULD BE PAYING FOR THEIR FOOD AND RENT.