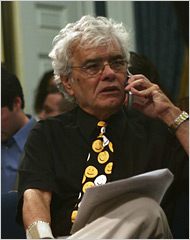 Only the city’s bloggers like Your Free Press, Pardon Me For Asking, The Brooklyn Optimist, The Daily Gotham, Queens Crap, and Washington Square Park reported to their readers during the term limits debate that the Council’s argument for continuity of leadership to save the city’s economy was nothing more than public relations spin to cover the Council’s blatant power grab for an additional term in office. At the same time these citizen journalists across the City were reporting the real facts, the Mayor was meeting with the publishers of the three major dailies to coordinate a cover story for his support of extending term limits. Working in concert, the dailies provided the Mayor with the rationalization to disregard Bloomberg’s previous public statement that “it would be an absolute disgrace to go around the public will” to extend term limits.

Rafael Martinez-Alequin, publisher of Your Free Press, wrote on his blog that it was a sad day for democracy when the Council passed the term limits extension. He openly expressed anger at those that voted for its passage, echoing the spirit of Former Daily News columnist Jimmy Breslin. As Breslin said, “Rage is the only quality which has kept me, or anybody I have ever studied, writing columns that exposed the wrongdoing in government.”

It is bloggers like Martinez-Alequin who are keeping journalism alive and vital in New York City. They are following in the footsteps of newspaper greats like Joseph Pulitzer of the long lost New York World, whose legendary name is ascribed to journalism’s greatest honor. Pulitzer’s passion-filled editorial pages were the true heart of the World. There he crusaded against the robber barons and oil and rail companies, exposed corrupt politicians and brutal policemen, and advocated for decent working hours and humane living conditions for the poor.

And that's exactly why he was denied a press pass...
Posted by Queens Crapper at 12:26 AM

The mainstream media can't be trusted, not that they ever could. Big thanks to bloggers like Queens Crap for exposing the truth on issues such as this.

I read today that supposedly Angelina Jolie signed an agreement with Time Magazine. An exclusive deal whereby Time/People Magazine would only provide positive coverage on Ms. Jolie. Is this what the press is becoming? George Orwell couldn't have predicted this. Pravda is more objective then Time/People Magazine.

Check out the blogs - interesting many are from Brooklyn - what about Manhattan?

Queens Crap is the only one in Queens.

Yes, and interesting that blogs may have some input in community boards.

Certainly explains the censorship of the community by the mods at astorians.com.

Must keep a suffocating lid on that community. Now that everyone else is waking up to development, we need to put that half million somewhere!

It was Obama who tossed the news outlets from the campaign plane. Why? Oh. Just because they endorsed McCain.

It is your blind hatred based on willful ignorance that feeds the biased media and the abusive politicians.

A true free press keeps the politicians honest and humble.

Amendment I
"Congress shall make no law respecting an establishment of religion, or prohibiting the free exercise thereof; or abridging the freedom of speech, or of the press; or the right of the people peaceably to assemble, and to petition the government for a redress of grievances."

What a work of art and intellect!

What word, clause, phrase or sentence authorizes any level of government to decide who is or who is not a journalist? Or, which news outlet is or is not "media"? Or, for what purpose any restriction (abridging) of which journalists can have what access to any government fact or event?

Why should any government employee (elected, appointed, or hired hand) be authorized to decide who will report, interpret, analyze, editorialize on public matters? Remember, what works in your favor today, will work in your opposition's favor tomorrow.

Press passes eliminate the chaos from covering an event? Too bad for chaos. We decide on all the issues.

Written in blind hatred.
It was Obama who tossed the news outlets from the campaign plane. Why? Oh. Just because they endorsed McCain.

It is your blind hatred based on willful ignorance that feeds the biased media and the abusive politicians.
??????????????????
What are you talking about.All we ever heard was garbage about hes a muslim, hes a terrorist, and we never heard any in depth reporting on the religious group palin is from who are dangerous buts who believe in religious war for conversion kinda like muslim extremists.NEVER any coverage of the succesionist party her and Todd are apart of that has promoted violent acts against America and Alaska being seperate.Obama and bush are not much different.Do you know anything about his chief of staff pick???You remember 1948 and the ethnic cleansing.

Palins church also has thousands of missionary nuts in Iraq right pushing christian conversion and thats the last thing that country needs.Its been noted in German press but no the U.S. press that the missionarys are promoting more violence.
*It is your blind hatred based on willful ignorance that feeds the biased media and the abusive politicians.
Now go look that up taxpayer and do your homework you lazy right wing biased "intellectual".Youll be the first up against the wall when you have to kiss the bible to be reborn.

Blind hatred and willful ignorance, it remains a fact that Obama tossed three journalists from his campaign plane because their employer news outlets endorsed McCain.

The rest of your ignorant and uninformed claptrap is a product of the ultra blind hatred and stupidity that has consumed so many of your fellow conspirators.

Eeek! Eeeek! The sky is falling and Bush made it fall!

It's a new day. Now you have to blame your erectile dysfunction on someone else. Look at those hands of yours, for starters.

Taxpayer:The rest of your ignorant and uninformed claptrap is a product of the ultra blind hatred and stupidity that has consumed so many of your fellow conspirators.

Eeek! Eeeek! The sky is falling and Bush made it fall!

It's a new day. Now you have to blame your erectile dysfunction on someone else. Look at those hands of yours, for starters.
?
So look at the debt counter from bushs insane spending which is not an opinion, it is a fact and tell me how anybody would be able to pay that down?Bush plainly lowered the dollar in a lawless and unaccountable way.The skys not falling but the U.S. has lost its status as a super power or a country taken seriously.It will take many many years to fix that frat boys bonanza for private contractors.The BBC and the Guardian had two articles recently pointing that out quite eloquently.Only one state, North Dakota has no debt right now, but they also dont have much infrastructure. Your rantings taxman reak of a junior high jock mentality with cute "hand" talk.Read more and look at facts.Dont just throw insults around like O'Rielly and no substance with your typing.