Como wimps out of debate again

Assemblywoman Marge Markey had responded that she would not be attending to debate her challenger, Tony Nunziato. However, Councilman Anthony Como failed to show up to debate challenger Elizabeth Crowley after promising in writing to attend.

The following e-mail was received on October 29th from the Como campaign at 12:34pm, after several back-and-forth exchanges regarding the Councilman's attendance at the debate: 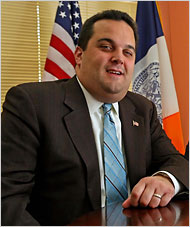 "We were able to modify Thursday night's schedule so that Councilman Como can arrive on-time for the debate. We will be there between 8 and 8:30pm. Thank you for your consideration and assistance."

I guess after the Catholic church calls you a liar and newspapers expose your backroom deal to extend term limits, it's hard to show up at a Catholic school to answer tough questions.

Photo of Como from NY Times.
Posted by Queens Crapper at 3:46 PM

I refuse to believe any talk that a man of Como's integrity, a man endorsed by Cardinal Egan, a man of intellect, and a man who wrote repeatedly to say he would participate in the debate would then disappear with no explanation.

If he actually did bail without explanation, I can give you the reason: he was confessing all his sins - and that was an all-nighter. Does anyone have the recording?

Forget those mean rumors that say Como is a coward, too frightened to debate the challenger, Liz Crowley, who is the likely winner.

Don't let anyone say that Como is a no-neck moron who cannot speak coherent sentences without his puppetmaster Gallagher behind him (doing what, is unspeakable).

Don't let anyone tell you that Como has no adequate explanation for having to beg Quinn's and the Commissar's permission to vote against the voting constituents' interests.

And, he CAN explain his monster MacMansion that violated not only every stop-work order, but every sense of good taste and decency.

He has good explanations for keeping Gallagher, Gallagher's office and Gallagher's staff. He just believes that the voting constituents are not worth the effort of providing an explanation.

And, certainly, he can easily explain his list of accomplishments since taking the oath - actually, one explanation was that he couldn't serve the constituents because he was busy campaigning by not explaining. His campaign motto: Never explain; just campaign! Screw the taxpayers Just send them the bill. They'll pay without protest - they're too stupid to protest.

This fat bastard is really getting on my nerves. And brace yourselves, folk. As the ignorant electorate we are,I predict we're stuck with this brainless puppet for 13 miserable years.

The area he represents is the epicenter of stupidville. I've been living here for about a year and I've never seen more morons per sq foot. I've voting Crowley, but my prediction is no neck Como wins.

I can't blame him for staying clear of the unprofessional, hateful attack group that is the Juniper Park Civic, but he shouldn't say he will attend and then just not show.

Ask Serf and Addabbo if we were fair during their debate.

Crowley ducked the first debate, too, but was big enough to admit her mistake and appear to speak to her constituents. She is clearly the better person and the better choice.

The area he represents is the epicenter of stupidville. I've been living here for about a year and I've never seen more morons per sq foot.

Anthony Como is a liar, the worst politician there is. He sold his constituents out on the referendum and then bragged about how he was against term limits.

He didn't show at the Juniper Valley Civic debate because he couldn't defend the Cardinal Egan endorsement scam so he chickened out.

ANTHONY COMO IS A PROVEN LIAR and COWARD.

I would like to take this opportunity to endorse Anthony Como for re-election to the New York City Council, by far the most corrupt legislative body in the nation.

I'm not saying that Anthony is corrupt - not yet. He's new and we have to give him time to hone his tweeding skills. But he's proven great potential in his short time in office. He's learned the art of the backroom deal (term limits), the art of hypocracy (his McMansion), how to take credit for things he didn't do (stoping the slush fund abuses), how to break committments (ducking debates), how to associate with scum (hiring Gallagher's staff), how to lie and fake endorsements (Cardinal Egan fiasco). What this guy lacks in looks and speaking skills, he makes up with this fine skillset.

In addition, Anthony has a big presence in the community. Big house, big waistline and big loads of bull. In these tough economic times we need someone who will keep our restaurants and food markets in business. Anthony Como is that man. So I hope you will join me Tueday in getting behind Anthony.

I was driving down metro the other day and I could swear I saw Gallagher going into Como's office. Am I nutz? Anyone else see him around Como lately?

Anthony is a fool for ducking out of a debate. People in that civic are very likely to vote, but are very independent. They don't just vote for whoever Bob or the board likes, If a civic's president doesn't like you, you can still speak to the constituents. He likely could have picked up some votes there, but bailing with no warning is disgraceful and he lost a good opportunity.

Anthony is a fool for ducking out of a debate.

Yeah, but it's not the first time.

Multiple Choice Question-
Select from the following the individual(s) who actually want Anthony Como to be reelected:
1. Gallagher the Granny Rapist
2. Kerri Skankmuller
3. A Swinging Metzgers
4. A Stuttering Jake Ass "Attorney"
5. all of the above

ANTHONY COMO IS A PROVEN LIAR and COWARD.

He was exactly the same in high school. A real a_ _hole. How did this dunce become an attorney?

Perhaps Como was busy at home working on his eyesore McMansion. What a jerk!

By the way, this was the second debate Marge Markey ducked. You can't rest of your laurels forever, Marge!

That's because Tony cannoli
was too busy shoving phallic pastries in both ends!