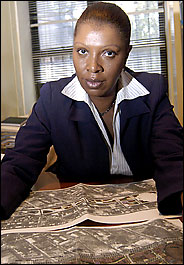 Council Member James Calls for Halt to any Seizure of Property

(Brooklyn, NY) - May 23, 2007, Council Member James has learned today that the New York State Historic Preservation Office (SHPO) had never made a determination on the eligibility of the Duffield Street Houses to the National Register of Historic Places, the country's official list of historic properties. Not only has the agency not issued an official determination (according to their records), but agency staff was never consulted about the possibility of the buildings being eligible nor did it seem that the agency was ever consulted about the larger Downtown Brooklyn Plan.

The only contact that SHPO had with AKRF, the consulting firm who wrote the report on Duffield Street, regarding this project was an information request about whether the state agency had anything existing in their files about the Duffield Street houses. SHPO also reported that the agency was in recent receipt of a form letter from AKRF thanking them for their help in researching the properties & enclosing a copy of the Executive Summary of the Research Report.

"This is a major omission on the part of the City and their consultants. The basis of the Research Report is that these buildings should not be protected because they are not eligible for any kind of historic recognition - a point that the majority of the peer reviewers disputed. That the government agency who is tasked to make this exact determination was not even consulted seems negligent at best," said Simeon Bankoff, Executive Director of the Historic Districts Council.

"This process, as it has been followed by the Administration and its paid consultants, essentially seeks to undermine federal environmental protection laws, such as the National Historic Preservation Act of 1966, the National Transportation Act of 1966 and the National Environmental Policy Act of 1969; all of which mandate that consideration of the effect of government actions on historic resources. All proceedings should be halted immediately in light of this disturbing revelation," said Council Member Letitia James.

"Once again, it has been demonstrated that AKRF has failed to make an honest assessment of the historical significance of the Duffield St. homes. This is further evidence that the City must re-open the environmental review process and permit meaningful public comment," said Jennifer Levy, Director of the Housing Unit, South Brooklyn Legal Services.

Photo of Ms. James from NY Times
Posted by Queens Crapper at 6:12 PM

Naturally Bloomberg and his appointees lied.

Who cares that the site is related to an admirable slice of history related to slavery in America?

Developers are white. Their money is green. Bloomberg wants money. To hell with preservation. Lie, lie, lie. Lie all you want to "Little People". Developers are precious people who have cocktail parties in places where Little People aren't permitted.

Time to usher in Avella who values our city's rich history, and the inhabitants' concerns. Please sign up for his campaign if you haven't already done so. He will make a difference!

This is certainly not a mistake or oversight!

This is rampant overt RACISM on behalf of both the City & State!

People of color, once again (this time in modern history), are being abused, and politically beaten by their new masters!

Well, where is the historic preservation community? Lots of stuff is getting torn down and lots of communities need real support.

Well, the historic preservation community is only interested in a handful of communities - covering perhaps 5% of the city.

Of course they write grants as if they are involved in 100% of the city.

If Avella is connected to the "Parkside Group" then maybe we're all being skillfully taken for a ride!

And he may have just lost my vote in his mayoral bid!