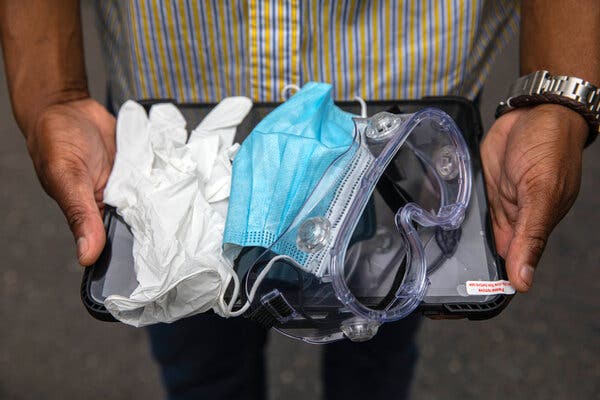 It was only a few weeks into the rollout of New York City’s much-heralded contact-tracing program, a vital initiative in the effort to contain the coronavirus and to reopen the local economy. But in private messaging channels, the newly hired contact tracers were already expressing growing misgivings about their work.

One said the city was “putting out propaganda” about the program’s effectiveness.

Another wrote, “I don’t think this is the type of job we should just ‘wing it,’ and that’s the sense I’ve been getting sometimes.”

A third tracer said, “The lack of communication and organization is crazy.”

The authorities around the world — especially in East Asia and Western Europe — have rapidly enacted contact-tracing programs, which are used to identify and then isolate groups of people who may be infected with the coronavirus.

Mayor Bill de Blasio has declared that the city’s new Test and Trace Corps, which has hired about 3,000 contact tracers, case monitors and others, will make a difference in curbing the virus now that the outbreak that devastated New York in the spring has waned.

But contact-tracing programs have presented an array of challenges to government officials everywhere, including difficulties hiring many workers, privacy issues and faulty technology, like apps. And New York City’s seems to have been especially plagued by problems.

The de Blasio administration acknowledged that the program, which began on June 1, had gotten off to a troubled start, but said that improvements had been made.

“All signs indicate that the program has been effective in helping the city avoid the resurgence we’re seeing in other states,” Avery Cohen, a spokeswoman for the mayor, said.

Still, some contact tracers described the program’s first six weeks as poorly run and disorganized, leaving them frustrated and fearful that their work would not have much of an impact.

They spoke of a confusing training regimen and priorities, and of newly hired supervisors who were unable to provide guidance. They said computer problems had sometimes caused patient records to disappear. And they said their performances were being tracked by call-center-style “adherence scores” that monitor the length of coffee breaks but did not account for how well tracers were building trust with clients.

Some also bristled at what they described as crackdowns on workers talking to one another.

The New York Times developed a portrait of the program through interviews with several current and former workers, as well as through an examination of internal documents. Further information was obtained from screenshots of Slack messaging channels used by tracers, which featured numerous conversations about workplace conditions.

“It reminds me of an Amazon warehouse or something, where we are judged more on call volume or case volume than the quality of conversations,” one newly hired contact tracer, a public health graduate student, said in an interview.

“To me, it seems like they hired all of us just to say we have 3,000 contact tracers so we can start opening up again, and they don’t really care about the program metrics or whether it’s a successful program,” she said.

Most of the current workers interviewed for this article spoke only on the condition of anonymity, saying that they feared losing their jobs if they spoke out publicly.

Individual’s autonomy being taken away !
Welcome to 1984...

Not surprising for a job that needs high skills, training and technology that is started in a rush. It is also possible that it is more public relations than real.

Shocking,simply shocking. This is what happens when you have a incompetent administration running the city
Can we ever expect anything better of this idiot mayor and city council.
There answer to every problem is to throw money at every problem. Just might as well take a pile of money and burn it.

My brother and I have both been tested.

In his case he was visiting a war gaming bud in Brooklyn. Got there by one of those yuppie-welfare ferries There was a tent set up and they asked him if he'd like to get tested. He was called the next day with the result;: negative.

Mine was in a doc's office -got same result 2 days later.

There have been several small clusters in the dunces upstate. So-far, these have all been contained with tracing and self-quarantining.

Test reliability aside, it does seem the system is working.

Just don’t ask the subject if they were at a recent riot.

"Got there by one of those yuppie-welfare ferries" - And yet your brother utilized it, and you threw him under the bus to score some cheap political points.

"Test reliability aside, it does seem the system is working." - The plural of my personal anecdotes is DATA!!!, Rob in Manhattan/Genius Statistician

Tell that to 160,000 families who lost a loved one. Those deaths must be fake. You're an idiot.

“ Individual’s autonomy being taken away !“

Does this program prevent you from going to the supermarket? Take public transportation?

"You're an idiot" Now Robbie that's not nice. No go eat mommy has your dinner ready.

Rob in Manhattan/Genius Statistician not !
More like a bootlicking liberal !

"Individual’s autonomy being taken away"
"How? Apparently you’re mildly retarded."
Really, let me spell it out for you.
It's the unease people feel about the government or private companies gaining access to their personal data and using it in a harmful way !

Hidin' Biden said...
You can feel Queens Crap Readers are getting fed up with the left at this point.
Hopefully the silent majority saves America as we know it.... not the biggest fan of trump but am of America. This is a huge election #MAGA2020

Re Anonymous ""You're an idiot" Now Robbie that's not nice. No go eat mommy has your dinner ready"

1)It's Ron, not Robbie. I know three letters is tough for you. At least you got the R right.
2) It's "now", not "no". I guess Mommy never taught you how to spell. Go back to first grade and try to pass it, if you ever did the first time.
3) You need a period between "eat" and "Mommy". "Mommy needs a capital "M" I can explain on another day. See 2) above.
4) You have no answer as to why the 160,000 dead people doesn't concern you. You make an idiotic personal attack on me, but it doesn't hide how callous your "Hoaxid" comment is.
5)You're still an idiot.

Thanks for the spell check Robin !

Hey ronn s not everyone is a fake news eatin' pony-soldier !
With all the talk about "tolerance" on the "left" I fine none for those who challenge your political correctness ! Keep drinking the Kool-Aid you got in school and from the fake news media son.

RE: Anonymous Anonymous said...
Hey ronn s not everyone is a fake news eatin' pony-soldier !
With all the talk about "tolerance" on the "left" I fine none for those who challenge your political correctness ! Keep drinking the Kool-Aid you got in school and from the fake news media son

1) It's Ron, not ronn--that three letter thing is still a problem for you.
2)What is a "fake news eatin' pony soldier?" Just curious...
3)Not sure what "tolerance" you are looking for. I sympathize with the families who lost a loved one. You rant and rave some Fox News bullshit.
4) Sympathizing with people who lost a family member is called caring for people, not "political correctness"
5) Yes, I went to school-you must have been the sleeping dunce in the back of the room
6) You're still an idiot
7) I'm not your son-the thought makes me want to puke