Flushing waterfront development: Ah, the smell of it! 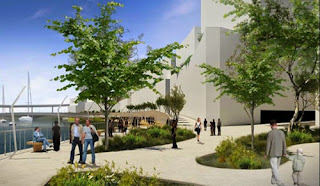 A Flushing group and the Department of City Planning have teamed up to push forth a project that would redevelop the Flushing waterfront and bring more affordable housing to the area.

In 2011, the Flushing Willets Corona Local Development Corporation received a $1.5 million New York State Brownfield Opportunity Grant to fund its Flushing Riverfront Project, which would clean up and rezone 60 acres on the Flushing waterfront. The project would create a planned community with waterfront access and housing and commercial space.

The study area — whose lot area consists of 32 acres — covers Prince Street to Flushing Creek on the west, Roosevelt Avenue on the south and Northern Boulevard on the north.

“This was a great opportunity to join both efforts because the goals were aligned to create a new community and Flushing has a great need for affordable housing,” said Alex Rosa, a project consultant for the corporation.

The agency will put together a brownfield opportunity area report that will explain the challenges and opportunities for redeveloping the area and prepare rezoning recommendations.

“Flushing did have a lot of dynamics to it where it seemed to be growing towards the waterfront and we wanted to combine the idea of the downtown vibrancy, creating new jobs here and new housing and provide a market with a direction that would also include affordable housing,” said John Young, director of the City Planning’s Queens office.

In 2012, members of the Flushing Willets corporation found that the 60-acre area was mostly made up of industrial and unused lots, which could be used for numerous purposes.

Three-quarters of the study area is zoned C4-2, or a commercial and residential zone. The northern portion of the study has M1-1 zoning, which is light manufacturing. The northern portion along the waterfront is zoned M3-1, which is heavier manufacturing. The study will be introduced at a public town hall meeting May 21 at 6 p.m. at Flushing Town Hall.

So Claire Shulman's bogus lobbying group is pushing to to rezone more manufacturing areas for bullshit "affordable housing" that will do nothing but further enrich wealthy developers? Aren't we tired of this shtick already?
Posted by Queens Crapper at 12:16 AM

Don't you know that we have to house all of china here in nyc especially in the northeast area of queens?

Go for it, you goofballs.
Build affordable housing in one of the most polluted toxic sites in New York.
Can anyone really afford to live in that poisonous mess?
Dare they, for their children's' sake?
Of course, we will hear talk of remediation.
Ten years down the line, what disease clusters can be expected?

It is for the Chinese who are used to living in crap.
Maybe the dragon boat races will move to the river.

There is an effluent net stretched across the Flushing River to catch the poop that the sewage retention tank was supposed to clean up. Great site for affordable housing. Watch the shit float by.

How does removing the manufacturing are CREATE jobs?