It's Joe Crowley's world...we just live in it 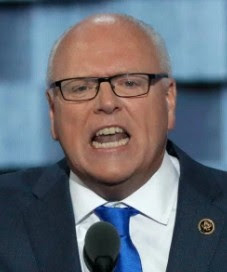 Rep. Joe Crowley helped push through $10 million in funding for a Bronx merchants association that was represented by his brother’s lobbying firm, The Post has learned.

The federal infrastructure money, which Crowley (D-Queens) and Rep. José Serrano (D-Bronx) led the effort to secure, came just months after Crowley’s brother, Sean, lobbied the House and the US Department of Trans­portation on behalf of the Hunts Point Terminal Produce Cooperative, records show.

The merchant co-op, which was awarded the federal funding in August 2013, has shelled out at least $827,000 to the lobbying firm Davidoff, Hutcher and Citron since 2009, federal and state records show.

Sean Crowley is a partner at the firm and has worked there since 2006.

“Everything about this reeks of a conflict of interest,” said Ken Boehm, chairman of the National Legal and Policy Center. “The congressman was not elected to help his brother’s lobbying firm — he was elected to represent his constituents.”
Posted by Queens Crapper at 7:03 AM

For years, Mr. Crowley has been persona non grata. In fact, when I first started reading this blog, so many comments were made about his lack of presence in the borough he's suppose to represent, which certainly made his nickname "Virginia Joe" justified.

Now he's become more vocal lately as he has assumed a place in the pilferd resistance movement among elected hacks initiated by Hillary's proclaiming to be a citizen activist.

Well, it looks like this bald asshole is about to get his comeuppance from ripping off his constituents and the government, and colluding with convict Jose Serrano to boot. Crowley may be the most corrupt sitting member of the house next to his partner in crime in the dirty southeast "Squatter" Meeks.

Welcome to your corner of the "swamp".

I am hopeful that you enjoy the stench...

Will we ever be rid of crooked politicians?
That was just a rhetorical question.
The answer is , obviously, no!
Never in the borough of Queens, where most of its voters have the general I.Q. of a burro!

“The congressman was not elected to help his brother’s lobbying firm — he was elected to represent his constituents.”

What planet does this guy live on? His constituents, for the most part, have no idea what representative democracy means - all they know is the Boss gets them little trifles, bends the system here for a relative, gives a benign smile there, and, just like in the little villages their families came from, be it a barrio, on the steppe, or a slum, or a ghetto, he is fine with them.

The lapdog press sings his praises, his minions get elected with 99% of the vote, the word on the street is not only can they not be beaten, but you should keep your mouth shut, offices are the spoils to be doled out to supporters like feudal villages were to henchmen, and taxes are another name for payday as infrastructure is neglected and falls apart just as it did when the barbarians took over after the fall of Rome.

In short, its our own little fascist state - Honest Joe Crowley and his Machine. And as his predecessors said to the great grandparents of today's serfs, "What are you going to do about it."

Queens is a stunted backward place because of the Joe's Machine. It lives in its own world that no one from outside wants to get involved in. The passive people will do nothing to change things, and will stab in the back anyone who wants to help them - for making them think or take responsibility for their pathetic lives.

Is a big club and you ain't in it.

Don't smirk too much. Those of us that study these things know about the pendulum. When historians get done with you, your grand kids will spit on your grave.

Nothing will happen to him, nothing ever happens to him

He'll skate as usual. Nothing bad happens to these "elite" politicians. The rules don't apply to them. Plus, he's a democrat and they can do no wrong. He was just re-elected with something like 80% of the vote. He's not going anywhere anytime soon. We're stuck with him and he'll line his pockets with more money. Next election, people will forget and he'll sail in for another term. Only the voters can end his career and they don't seem to be willing to.

Do tell. The quote is from George Carlin and nobody spits on his grave, because ghe was 100% right.
You need to get your ass out of NYC and see how other cities are able to provide decent services and quality lifestyles.
The political cesspool in NYC will never change - I guarantee that.


Nothing will happen to him, nothing ever happens to him

how much does he pay you to run around and tell people 'you cant beat city hall.'

How nice, he does more for the Bronx then he does for Queens, yet he gets to decide almost everything political about our borough while lining his pockets with our money.

I would not count your chickens. There is a new storm blowing and it is as of yet a gentle breeze in our backward neck of the woods - but you see it a-commin'.

The boys in the clubhouse have no idea how pissed everyone is and all we need is an opportunity to short circuit this fixed system that Joe and tha boyz have thrown around our necks.

Hillary was a hell of a lot bigger, and smarter than Joe and looked what happened to her.

History is on our side, not his. The old Ward Bosses are long gone, and they were a hell of a lot more effective, and beloved, than this nitwit.

His days in power are numbered and his fall will be sudden and quick. They got too lazy and stupid. You will see. Ha ha ha, ho ho ho, gooodddd byyyeee!

Do tell. The quote is from George Carlin and nobody spits on his grave, because he was 100% right.

No. You just made that up. of course he is dead, but nobody is spitting on his grave.
Tha man was ahead of his times by light years. Now deal with it.

George is dead, but his prophetic wisdom lives on, infinity.

And the last anon is dead on. The tides are turnin' and the winds are changing. The elites are out of cons, they're tapped out. Hillary has become a joke and the Clinton Money Changing Industrial Complex vanished into the ether.

Look no further than Washington D.C., Figurehead Trump and his plutocabinet are throwing out ludicrous and dangerous proposals left and right to personally enrich themselves. They are basically ruining graft for every jackal in elected office.

Joe and family and company got too greedy, and what they have done is worse than what those subhumans involved in the Manes/PVB scandal did.

This is going to be an interesting summer...