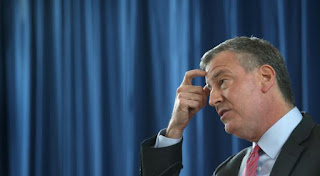 Mayor de Blasio personally banned the opening of new shelters in 2014 because of community backlash — and instead told officials to put homeless families in less secure hotels like the one where a mom and two kids were slaughtered Wednesday on Staten Island, The Post has learned.

De Blasio issued the edict during a meeting with Deputy Mayor for Health and Human Services Lilliam Barrios-Paoli and Department of Homeless Services Commissioner Gilbert Taylor — both of whom later resigned amid the growing homeless crisis, a DHS official said.

“They started pushing us to put clients in commercial hotels because they didn’t want to notify the people in the communities,” the DHS source said.

“When you open up a shelter, you have to notify the community, City Council members, officials, and people get upset. [De Blasio] had opened a lot of shelters that fall and was afraid of opening more. So he started opening up these hotels.”

“These commercial hotels don’t have adequate security, and [city officials] know that,” the source explained. “Regular shelters do. [Many] have full-body metal detectors. A boyfriend can’t just walk in and go to his girlfriend’s room if he doesn’t live there.”
Posted by Queens Crapper at 12:31 AM

It's call about him and his political future.......which is done.

This is what he thinks of people of NYC. From the middle class to the homeless. That last chump running the DHS was nothing but a patsy following orders.

This bloodbath in addition to the service worker chased naked in the street and killed in the Bronx and the crane collapse on Worth are all on Mayor de Faustio.

One term for this fraud, Although it's looking more likely that he will bail out himself.

There is little that is transparent about this mayor, and far less substance.
You can easily see right through him and his REBNY supporters.

now if we can put then at all public housing projects, the crime rate will drop dramatically.....dont poor people have a right to safety from thugs and drug dealers?


“Regular shelters do. [Many] have full-body metal detectors. A boyfriend can’t just walk in and go to his girlfriend’s room if he doesn’t live there.”

So how many of these terrible hotels/homeless shelters are in de Blasio’s hood of Park Slope, HOW MANY?

Far left liberals always like to act like they are doing the right thing, BUT only if they do not have to see it or as long as it is not in their own back yard, like a hotel turned homeless shelter, which actually should be illegal, because it is not taking care of the homeless, it is just warehousing the homeless like so many pieces of hanging meat.

If you are going to talk the talk, you MUST walk the walk, otherwise you come off as fake and not sincere.

This should be of big concern for people in Jamaica and other communities that are having tons of hotels built into their areas, where there really is not a need for hotels. The Jamaica area has already seen a couple of hotels recently turned into homeless shelters.

This “The Tale of Two Cities” & “transparent & accountability” Mayor has proven you don’t always get what you are given to see. Smoke and Screens.

That last chump running the DHS was nothing but a patsy following orders.

Can you think of a single Queens functionary (with the possible exception of Tony) with whom this description does not fit?

Now, isn't that exactly what the NYPD, PBA and their leader, Patrick Lynch attempted to achieve, when they flew banners in the sky, after Police Officers Ramos and Liu were executed in cold blood in their police car, on Saturday, December 20, 2014?

What happened to THAT impeachment movement, or any action at all, after those banners stopped appearing in the New York skyline? Where is ANY organized activism, protest, rally and resistance, then?

Alas, if ever there was an urgent call for mayoral impeachment, then it would be for THIS corrupt, dishonest, dishonorable, disloyal, derelict, pathological, confabulating, dissembling, intensely incompetent mayor of extreme cronyism and nepotism, who continues to lose whatever remnants of credibility he's got (which is next to nil), by the hour!

Because, New York City is starting to look like a battle zone that is far worse than the societal collapse and lawlessness of the early 1970s---where the law abiding taxpayer is once again at the losing end---and, it's as extreme as it is dangerous, beyond reason---and, now sanity itself!

My condolences to the young woman's family.

The father, murderer, has a NYCHA apartment. Why couldn't she have lived there?

Again I have to ask the question, why are such young women having children that they can not afford to raise? With three children, she was guaranteed a monthly housing voucher for an apartment.

Why is the government and tax payer being forced to take care of black families?
I know young women who had abortions because they couldn't afford to raise children.

Again I have to ask the question, why are such young women having children that they can not afford to raise?

Middle class people get to exercise family planning responsibly. Poor people get to be denied their rights to sexual and reproductive expression.

That's how American democracy should ALWAYS work, Anonymous, which is dramatically different from any and all erroneous comparisons to socialist/communist systems that are still openly practiced elsewhere.

Because, OUR Constitution (and other ratified doctrines) were empowered by and with an edict that maintains: 'Of The People, By The People And For The People!'

Nothing illegal or socialist/communist 'bout THAT! But, maybe if our citizens were not so heavily brainwashed and conditioned to falsely believe that impeachment proceedings are mere, sparsely used, political guidelines (to rid all corruption, greed and graft), instead of REAL policy enforcement deterrents against the type of unconscionable government tyranny that THIS corrupt, dishonest, 300% fake mayor continues to practice daily against his forever languishing constituents, then we would finally have some modicum of REAL democracy and public referendum---instead of whatever monarchy, totalitarian dictatorship that has still been foisted upon all city residents, by the LAST ABOMINATION of mayoral leadership---that murdered New York City---right down to its rooted core!

Rest In Peace, New York City (and State)! Because our men in blue are not the only living things whom this tacit mayor has so cavalierly murdered---in cold, disaffected blood---the pulse and lifelines of New York are now also DOA (and along with it, our livelihoods and erstwhile economy)!

Speaking of which: So, when can We The People expect you, Bill de Blasio, to veto those ungodly pay raises that were just approved by your pal, Melissa Mark-Viverito---against all public opposition that demanded no raises at all on February 3rd (that apparently has been once again ignored), for a part-time job that paid more than three times what full time employed wage earners make?

What? Did you sleep late again, Bill, or are you just an arrogant, elitist coward, masquerading around like a phony, 'Tale Of Two Cities,' Libutard Progressive? And, where is the Daily News to keep hammering away on this disgraceful, taxation without representation issue, by way of the pen that is purportedly mightier than the sword?

Silence and complicity anyone?

DeBlasio is not qualified to be Mayor. It is obvious. How do we move to impeach him? Whatever it takes we should begin the process.

He was eating hotdogs & coffee, handing them out on the F train platform surrounded by a army of cops. 6:30 Channel 7 news didn't show it.
The subways are packed with these homeless and many reek of #2 and piss. The cops cleared the crazy and dirty ones from the cameras.

I think this is more a mental illness problem then homeless. How is the mayor to fix this homeless and schizophrenics killing people if he cant recognize mental illness ?
A cop I spoke to even said 'we lock them up and the judges let'em loose because some shrink claims "hes a nice guy whe he takes his medication"
WTF !!

Richard,your post was spot on,thank you,and now I ask,what will be left of the Constitution and We The People with Justice ScaLia passing,
One more progressive on the SC and people like BeBlasio will become the norm
Tyranny will rule the day,we are a great country and people come to This country for a better life and our elected officials are Determined to turn us into Europe,how bad will it have to get before the people say Enough or is it to late.


wrong...if you cant pay your rent you live here than it's under OUR RULES......not at all socialist or communist......

Then Richard Stefan should take in some homeless and prove what a humanitarian he is.
Your papers please. What are your qualifications to be such an "expert" on the matter?

The Broadway LIRR station already has at least three bums. One hanging around on a regular basis hot or cold weather.
What has Paul Vallone done about it? Nearby 164th Street has a few regular bums commuting between the RR station and the corner deli
and liquor store. I did not move here , to a good neighborhood, just to have an out of touch councilman not give a damn about his district.Complaints to his office have been forwarded for months. There are still the bums hanging out.

Well who is going to start the process of impeachment ?

You are rapidly approaching Detroit...

Put a homeless shelter right up to Gracie Mansion. The kids will love the park. Next one put it next to DeBlaz's house in Park Slope. Call it The Wilhelm. The kids will love the things that the liberals leave out on the stoops, they can sell it all for crack. When you don't have to pay rent, you can spend the money on drugs and cheese doodles for your multiple children.


Again I have to ask the question, why are such young women having children that they can not afford to raise? With three children, she was guaranteed a monthly housing voucher for an apartment.
---------------

Typical story, too. Multiple kids. multiple baby-daddies. early 20s. And hanging at a hotel room on a weekday, so i doubt jobs and careers were in abundance.

The woman that was killed actually according to the news let the killer in through a side door so security at the front desk wouldn't have helped as visitors are restricted especially from staying over at night.