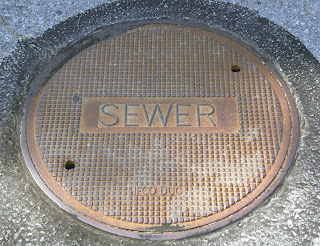 The city will begin a $33 million sewer upgrade this spring that will limit millions of gallons of pollution currently discharging into Flushing Bay and Bowery Bay, according to the Department of Environmental Protection.

The construction will be centered at five sites within the sewer system between LaGuardia Airport and the Horace Harding Expressway, officials said, and should be completed by 2018.

The changes should help prevent wastewater from flooding nearby lakes and bays as it currently does when it rains heavily, the DEP said, in order to avoid backing up into homes. The money will allow crews to work on the "regulators" or junction points, and divert water to a waste treatment plant even if it's raining.

Posted by Queens Crapper at 8:40 AM

Why is this raw sewage being allowed to be dumped into Flushing Bay? What is the origin? Who are the perpetrators ?

Wasn't an $80,000,000 sewage retention tank built, at taxpayers's expense, that was supposed to be preventing the stink?
Has all of the overbuilding, without proper infrastructure upgrades, made this tank obsolete?
Will the dredging only alleviate the stink for a few years, then more overdevelopment will require more dredging or another $80,000,000 retention tank to be built?

Since 1955 we have lived in the area.
To my recollection there were about two dredgings done already, and It still stinks!

How about increasing the taxes for new development to cover the costs of badly needed infrastructure upgrades?

That was purely a rhetorical question.
We already know the answer. No!
We taxpayers will foot all of the bills for poorly planned development,
while the developers will gladly bank their profits.

Since developers' money is the mother's milk of politics, do not expect much change for the better.
Since politicians are responsible for community board appointments, learn to accept little or less.

That stink is the stench of mendacity...our lying politicos farting all over us.
Whew....the wind just shifted. Hand me my nose clip.
From Flushing's Congressmember to its council member...all are crooks.
That is what really stinks!

Please leave the stink alone.
It's the only thing that wakes me up in time , to let me know that my #7 train is about to pull into Main Street.

But that's why it's called Flushing.
Flush out the poop and you have to rename the town.
Hmmmm....wonder who is going to get that dredged shit landfill.

They better do a good job this time around. The Worlds Fair Marina is so neglected you'd think you're in a 3rd world country. YUCK!!

Spot on! The real problem with mindless over development.
The infrastructure is not designed to handle all the new condos, towers, apartment buildings.

But that's why it's called Flushing.

I know you were being sarcastic, but for those who don't know, Flushing was named by the Dutch after the city of Vlissingen in the Netherlands.

I'm for returning to the Dutch name of "Vlisingen".
Let's at least take the curse off of its present name.

BTW...who approves all of this over development?
CB7 and our "illustrious" connected electeds and public officials.
And who supports many of these overpaid lackies?
That shouldn't be a tough one.
REBNY, of course.
That's the Real Estate Board of New York City....it's members and affiliates.

Peter Koo is on the tab.
My rep, Paul Vallone even lobbies for developers.

I read you.
Even that notorious criminal Tommy Huang had a partial tax abatement on the RKO Keith's.
Go figure. I guess there's some truth in the old adage, "Never steal anything small".
The politically connected have been stealing us blind and big time for years.
Your only real power is to elect those who will truly represent you.
Vote the bums, like Vallone , out. They are butt buddies with the real estate speculators.
Then you have CB7's zoning chair, Charles Apelian. Draw your own conclusions about the CB7 crew.

Let's have a colossal bronze sculpture commissioned for the Flushing waterfront just like the one they tried to put in LIC.
Crappy sitting on the Queens Crap throne. Fabulous!

Instead of dragon boat races we could have turd races....betting on which numberd turd reaches La Guardia first.
"The Third World Turd Regatta", sponsored by Peter Koo, and Toby Stavisky. My money is on Stavisky being more "fragrant" than the feces fleet.