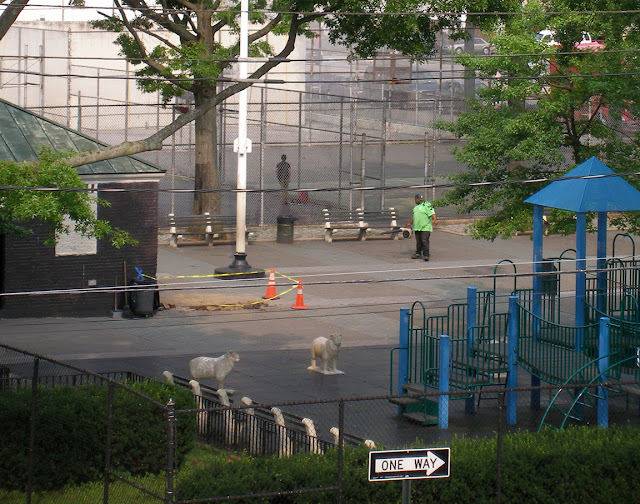 "I wrote to you five years ago about a problem that we had with the constant use of leaf blowers at Maurice A. Fitzgerald Playground on Atlantic Avenue & 106 Street in Ozone Park. This is a situation that we’ve been trying to correct since 2003. Unfortunately, the problem not only still exists, but has gotten worse! Filing complaints via 311 have been completely useless. 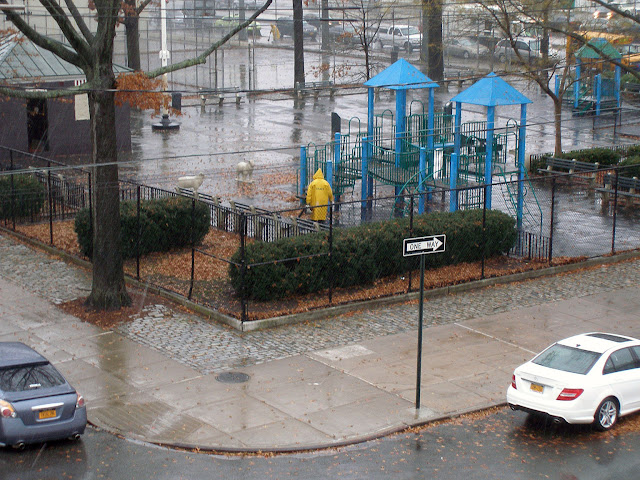 A recent complaint that I filed about their daily usage (which, this year, started in April) elicited a letter from Queens Parks Commissioner Dorothy Lewandowski in which she apologized “for the noise and inconvenience however, leaf blowers are a necessary tool”. “Inconvenience”??? How about a daily noisy nuisance that we are forced to endure for hours? Last year, they even used them on Thanksgiving. Thanksgiving!! The Parks Dept. couldn’t have given us or their workers a break from this nonsense for even one day?? As for “necessary tool” leaf blowers are nothing if not inefficient and ineffective. In fact, leaf blowers were banned in parts of California back in 2013 because of the noise and air pollution that they produce, for their “trespass” in homes and the adverse effect they have on one’s health. 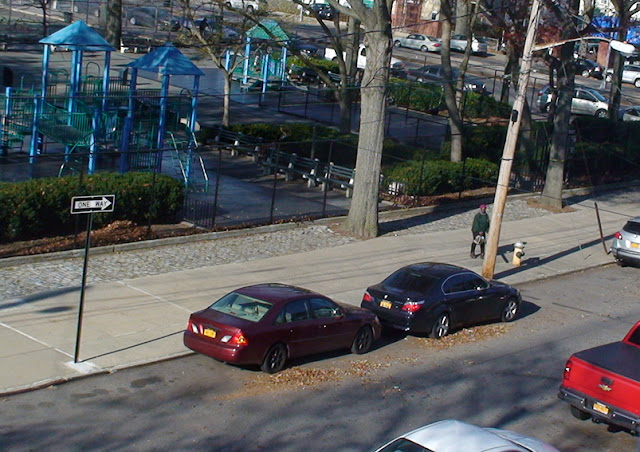 What’s crazy is that even in the rain workers are out there with the leaf blowers. At that point they become giant hair dryers that must dry the leaves before they can move them with the device. On top of that, even after being tormented for six hours with the noise, the storm drains around the park still aren’t cleaned. I guess that is better than last year when they blew all of the leaves from the sidewalk and curb across the street so that their job became ours. Better still is after they blow the leaves in a pile, they don’t collect them but leave the there for the wind to disperse them so that the cycle can start anew the next day!

To add to the insanity is the park’s workers using leaf blowers as toys. Last summer two workers were using them to play air hockey with a wadded-up lump of paper. Another sat on a park bench with her cell phone in one hand and a leaf blower in the other. She had it pointing skywards as it it were a Star Wars light saber and just sat there revving the damned engine while she texted. 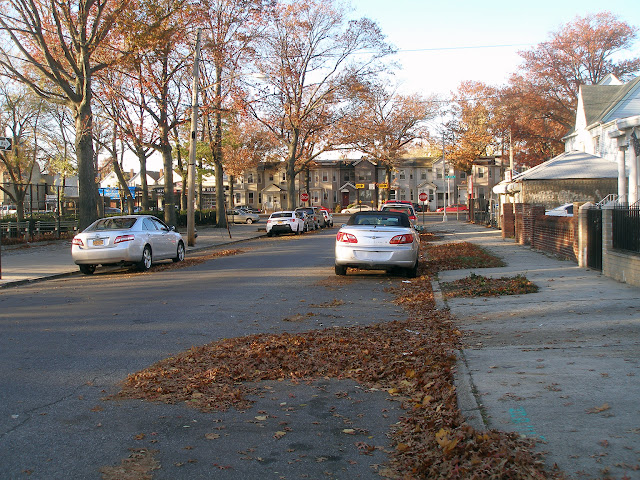 We are forced to suffer many quality of life problems from the Maurice A. Fitzgerald Playground such as the constant aroma of pot, loud music from the cars that cruise or hang around the park, firecrackers shot off at night year-round and basketball at 4 AM (the park is kept open for our “benefit”)… The daily use of the leaf blowers is adding insult to injury and demonstrates a complete disregard for all of the park’s neighbors. The solution is very simple: stop using them NOW. Commissioner Lewandowski has the authority and obligation to make this happen. I’m certain that she wouldn’t want to be subjected to this daily abuse, so why the hell should we??

Parks are supposed to provide us a bit of relief from our daily stress, not add significantly to it. “inconvenience”? how dare you be so condescending to us, Ms. Lewandowski? The daily din from these leaf blowers is an unnecessary obtrusive aggravation. Their usage needs to be ceased. Use a rake and broom – and lock up the place at night!!!" - Karl 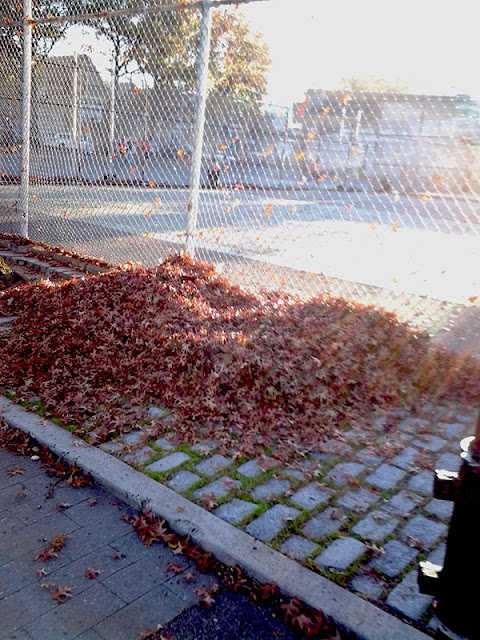 Write to your local politicians,including the mayor and demand they restore the 5000 cops that are no longer patrolling our streets. After all with only a 2% increase in pay,the city can afford it. If not you're sol....

Noise is very harmful to your mental and physical health.
I feel your pain Karl.

Give them rakes instead. Make them work for their pay!

Anonymous said...
THANK GOODNESS this was posted. There has been, and still is, a serious attack on quality of life in many parts of Queens due to noise. In my neighborhood, the main culprits have been disprespectful residents who blast loud music from their homes for days on end (religious/cultural purposes they mostly claim). The loud cars with their thunderous sound systems are quickly replacing the house parties as I'm increasingly being jolted awake on an almost daily basis by loud vehicles blasting all kinds of obscenity-laden music with wall-shaking bass pumping as they idle at the red light on my corner. But to think that a city agency, whose reason for being is to improve the quality of life for New Yorkers, is adding to the noise misery for so many, is reprehensible. I will keep a keen eye on this to see effective change, and not just more lip service and insincere apologies.

We're surrounded by leaf blowing building supers who spend forever blowing leaves into this street, only for them to blow back, so it has to be done again.

Whatever happened to common sense, brooms and trash bags if leaves need removing? People shouldn't be listening to this early in the morning through the afternoon and evening while these people play with their toys and accomplish nothing. Ban blowers!!!!!

Our tax dollars, literally being pumped into the air and blown away. Something to remember when ISIS hits on american soil...

Hey Karl, if the Parks did not use blowers they would need 2 or 3 × the workers to sweep the park. The workers will not work any harder just because you give them brooms and rakes. I don't know about you but I can live with fewer people on the City payroll.

California is right. They should be banned. Use a rake and get some needed exercise.

it is technically illegal to blow, because you are creating dust:

3.
No lime, ashes, coal, dry sand, hair, waste paper, feathers, or OTHER SUBSTANCE that is in a similar manner LIABLE TO BE BLOWN BY THE WIND, shall be sieved, AGITATED, or exposed, nor shall any mat, carpet, or cloth be shaken or beaten, nor shall any cloth, yarn, garment, material or substance be scoured or cleaned, nor shall any rags, damaged merchandise, barrels, boxes, or broken bales of merchandise or goods be placed, kept, or exposed in any place where THEY OR PARTICLES THEREFROM WILL PASS INTO ANY STREET OR PUBLIC PLACE, OR INTO ANY OCCUPIED PREMISES, nor shall any usual or any reasonable precautions be omitted by any person to prevent fragments or any substances from falling to the detriment or peril of life or health, or dust or light material flying into any street, place, or building, from any building or erection, while the same is being altered, repaired or demolished, or otherwise.

There are noise codes as well:

If we need the bodies to rake and sweep it up it is time to reopen the welfare to work program! Take these people on the dole and make them work for their check! DuhBlasio got rid of it, but it was a great source of labor that is already paid for. Put them to work!

I'd imagine a good broom and some actual effort would take care of the leaves in half the time the blowers do. What did they do before these machines existed?

At least with a broom the leaves will be bagged up and not just blown into the street!

Wow. There are still parts of Queens that haven't been NextGen'd by the FAA. I remember the good old days, when leaf blowers were a nuisance, and I'm sure as hell further from the airport than Ozone Park.

When the FAA finishes its airspace redesign and NextGen projects, leaf blowers will sound like a Beethoven symphony

Most parks don't get the leaves cleaned up, ever. Why does this park get a daily cleaning?

Who picks up leaves anymore? Nature put them there, nature takes them away, hopefully by the neighbors house.

How Obama has gutted welfare reform

One problem is that the Park Dept workers aren't bagging the leaves for disposal after corralling them into a pile with the leaf blowers. If they did this, there would be no need for them to visit this park more than two or three times between Halloween and Christmas. Every single day - rain or shine??? Talk about milking a job.

The other problem is that these workers aren't being supervised properly. It shouldn't take six hours to remove leaves from a park that size unless the workers are wasting time playing air hockey or texting. This is wage theft.

Karl should keep on complaining - take it to his council member - but don't focus on the use of leaf blowers. Instead, focus on the fact that the job IS NOT GETTING DONE.

The noise is outrageous. It is a serious quality of life issue as well. As for the Parks Department employees, they need to be supervised properly.

Why is there not a machine that just SUCKS UP the leaves? At the same time, the machine can grind the leaves down to a "dust" that efficiently gets into bags so that it is not disseminated into the air. Like a vacuum cleaner! Instead, you blow the leaves around into piles, spreading the dust, germs, and other pollutants into the air for us to breathe in, and then have to manually pick up the leaves somehow and dump them into a truck or bags.

"Why is there not a machine that just SUCKS UP the leaves?"

The Parks Dept. does have leaf vacuums. They're significantly louder than the blowers, emit a stink from the engine and take as much time to clear an area.

I'm still trying to figure out how this park merits full-time employees just to push leaves around, while other parks are lucky to see someone show up and empty the trash once a week.

That is one of the cleanest parks I have seen in along time it is surround by trees,and the workers are constantly bagging the leaves