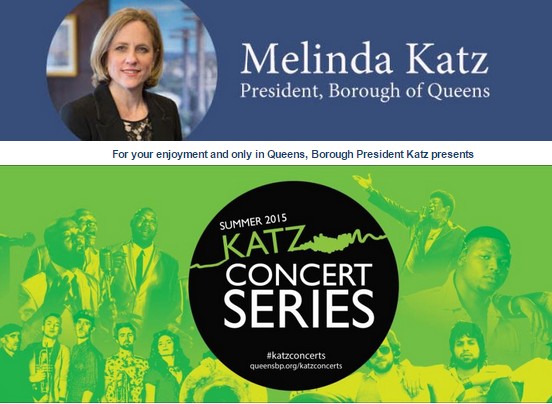 Every elected official throws money toward some kind of cultural event in their district. But guess what? It's not their money that funds it, it's money that came from taxpayers.

Never before have I seen an elected official name an event after themselves.

Until now, that is. The Katz Concert Series. I suppose we should just be glad that she isn't the one doing the singing.
Posted by Queens Crapper at 12:26 AM

I saw her being photographed at the Gay Parade Sunday by that mediocre fotog Domenick Tontino who thinks his oeuvre is hot shit when it's cold and caked diarrhea.. I would guess he's still the Borough president's official lensman as he was under Marshall. Hey, Tontino, you still pulling in with your racket those 80 G's to promote with your no-talent imagery Katz's stupid puss like you did Marshall's?

Why does Queens put up with all these jerks?

Can i bring my dogz?

Who is surprised, really,once elected they have a credit card with your name and billing address,
Will the tax payer pay for the booze too ?
What was Curtis Sleazwa thinking when he impregnated this kitten

No, Melinda, it is NOT your concert series! You were completely MIA plotting your return to politics when locals were working hard to make this happen!

Must admit that it's a good selection of music and venues.Nothing in Flushing Meadows Corona Park?

How is this any different from naming a bridge or a school after one of these parasites?

The Z in the graphic looks like it took a diarrhea shit.

Is there a way taxpayers can deduct this from next years return as charity?

This should not exist. As the Queens Steamer proves that the position of borough president is an unnecessary position.

Her and our mayor ego's are out of control.

In downtown Flushing, we can still see trash cans with John Liu's name, from the days when he was council member.

How many assaults, stabbings and shootings will occur at these events?
It's Forest Hills, hosting non hip hop musicians. Pretty low.

How many will have to be cut short dues to disturbances?
Complaints have not been very great.

How many will have to be cancelled?
Why?

How many cops will be piling up the overtime at these venues?
Maybe cut out a few of those pointlessly repetitive weekly street fairs in Manhattan and we'd make up the difference.

How many more years must we suffer these fools?
Those "fools" bring a boon of economic activity into the nabe. They've been well-behaved. What's your problem?

I miss the trash cans she plastered her name all over years ago!

Mark Weprin put his name and our money on all kinds of stupid stuff. But when it involved fighting for the community that he represented he was no where to be found.

One thing for sure alley Katz is in concert with all of the deveoper's that contributed to her election campaign.
Continued being impregnated with cash from the real estate industry, and the stupidity of Queens' voters, Ms. Melinda will be re-elected.
Take a lesson. If you plan on being a prostitute , make sure that you sored your legs for rich developers.
As far as Katz's two colar whore mentality....that needs some consciousness raising on her part.
I still cannot figure her out. Is she AC or DC, or AC-DC? Either way, who would wand to go near that pasty faced skank?

Delusional Anonymous:
Let's see how the venues in Jamaica, Far Rockaway and South Jamaica work out.
Cut short and cancelled? Please refer to last weeks hip-hop concert in New Jersey.
Overtime for cops? Refer to the above.
Those "fools" to whom I refer are the politicians.
And my problem is suffering not only them but ostriches like you.

Anonymous said...
In downtown Flushing, we can still see trash cans with John Liu's name, from the days when he was council member.

That's awesome - his name is still being associated with what he is!

Melinda Katz is trash.
Someone needs to tell her to stop talking about her two kids. What a phony.
NO ONE CARES

"How many more years must we suffer these fools"?

Until a cure is finally found for mindless Leftists who vote for such crap.

You can Thank Alan Hevesi for this..she is his legacy to Queens, and his orange jumpsuit!
He made her...he anointed her Assemblywoman when he became City Comptroller. UGH!

Interesting choice of parks (except for FH), it seems as though she is either thanking or lacking the ethnic vote..

I just hate all these political named sponsors, like we should thank them.

It's actually the "New York City Taxpayers Concert Series". Naming it after yourself seems egotistical and monarchical.

It's just plain wrong for an elected official to attach their name to any city event. It comes down to getting your name out there for free in hopes of getting re-elected. That's cheap and wrong!

Katz concerts? Well we already had Katz trash cans, Katz parades and Katz funding. So it's only natural that we have Katz music. Can't wait for Katz condoms.

Overheard on the party line said...

"Hello Curtis?. . .You know your gonad goo is still running down my leg."

Wait until Bob Turner runs against her

Not only is it shameless, derelict self-promotion at taxpayer expense (again, still and forevermore), but with all of the serious issues that require urgent attention and remedy within the ravaged and tonsured borough, this shouldn't even make Melinda Katz's list of Top 100 priorities for Queens County--in fact, not ever!

Worse, the same feckless patronage mill continues to slog along at Borough Hall that dates back to Claire Schulman--and beyond. Hence, nothing has changed; it's the same circus---with different, unfunny clowns. And Borough Hall itself looks like a building trapped in a time warp of epic fail. As I've previously stated, if a simple matter like upgrading, beautifying and renovating Borough Hall (and its surrounding public plaza property), could not be accomplished in more than 50 years, then all current social ills of greater import and urgency are going to be once again kicked down the road for the next administration---right after Katz announces her cradle-to-grave installment plan for her mayoral candidacy, naturally.

This is taxation without representation with a vengeance! Oh, and while your busy plastering your name on every blank surface throughout Queens, Madam President, how about finally restoring the blighted Kew Gardens Plaza to a working fountain, adorned by the rightful return of 'Triumph of Civic Virtue,' currently on loan to Green-Wood Cemetery for nearly three years, when it should never have been unfairly moved in the first place. Again, taxpayers' paid for the cleaning of this great, gifted monument to Queens nearly 71 years ago (only after it was evicted without due process), and now we demand the statue's long over due return.

Alas, I'm starting to long for the merely 'bad old days' of Helen Marshall, Claire Schulman and Donald Manes (which now seem 'quaint' by comparison), because there is nothing especially evolutionary (or clean) from this current, but willfully defiant and wasteful administration that was already corrupt, damaged and tainted from before ever entering the starting gate!

The eyes and ears are upon you, BP Katz---it's still not too late to start representing ALL Queens constituents (instead of your own self-interests), with honest, ethical leadership that leads by example---a testament to why a statue that represents Civic Virtue must always keep vigil at Borough Hall and beyond in the first place!