Bad zoning - is it a racial thing? 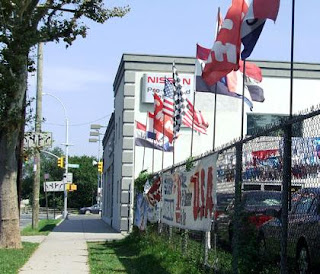 From a letter to the editor of the Times Ledger:

The New York City Board of Standards and Appeals (BSA) has a final say on land use issues throughout the five boroughs. They wield a lot of power over our communities. Too much power in my opinion. The BSA needs to be accountable to the taxpayers. The City Council should have the power to review BSA decisions and overturn those that harm our neighborhoods. Conditions adopted into BSA decisions have to be monitored by the Department of Buildings. From what I have seen, the DOB is highly ineffective.

In my neighborhood of Bayside Clear Spring, we have far too many auto related businesses that show no respect for their neighbors. Star Nissan parks more cars than permitted on their back lot. Despite repeated complaints, the Department of Buildings has failed to resolve the problem.

Helms Brothers built an extension of their building into the residential area through various loopholes, in coordination with the BSA and other city agencies. Did anyone in city government think of the residents?

The Getty gas station on Northern Boulevard near 204th Street neglected to renew their variance for years some time back. A letter was written to BSA about this by a civic association. The BSA’s executive director at the time wrote a letter to Getty giving them sixty days to renew or they would have to undergo the variance procedure all over again under the current zoning resolution. The sixty days passed without renewal. When Getty sought to renew, the BSA went back on their word and allowed Getty to get their variance renewal.

Why does my community have such an overabundance of auto related businesses? One does not see this degree of infiltration in adjacent areas. Does the city allow this because of the ethnicity of the people who live in my community? What else can one think but that African American neighborhoods are targeted for the least desirable businesses?

My people will not accept this treatment. We demand fairness and justice.

Mandingo Osceola Tshaka
Bayside
Posted by Queens Crapper at 12:18 AM

No argument about the BSA needing accountability, but maybe "your people" frequent auto-related businesses more than others?

The writer of this piece is right on 100%. More shit is dumped into communities of color and lower economic areas all the time. Jamaica is another prime example of this. And is has nothing to do with the one comment of "your people frequent such places".

As a white boy living in a community of color, I see first hand the shit that gets dumped into a community, even when some people fight this. Granted more people of these communities need to stand up and be heard, too much apathy, but still, there is a pattern.

For those of you who think Mandingo is a pen name, it's not. He's been around for a very long time. One of the great old time Queens activists. Just google him.

Joe, what is honestly so bad about auto dealerships, except that they might take up inordinate parking off their lot?

If Mandingo were complaining about methadone clinics or homeless shelters, or if auto dealerships were getting some kind of subsidy to be in that area it would be another story. But what legit complaint do you really have again at the wig stores and 99 cent shops in Jamaica? If these people pay their taxed (and their fines!), what say do you have in what shops open? Clearly that is what people are buying. Get better residents, and you will see better shops.

Is this a joke? There's car dealers the entire strip of Northern Blvd. Some seem to have too much time on their hands to create drama. Not everything that occurs in life is happening because of your skin color. There's car dealerships from Long Island City to Great Neck and Manhassett. Your "outrage" may appeal to some but doesn't fool most. Be happy there's successful operating businesses in your neighborhood who are paying taxes instead of abandoned boarded up rat and homeless infested buildings. Would that make you happy? If you live within a block of any part of Northen Blvd regardless of which neighborhood expect traffic and business activity. If you don't like it, MOVE. Northen Blvd in its entirety, as most BOULEVARDS, has a very high concentration of businesses, so it was a bad idea for you to move so close to it, now or even fifty years ago. And when did Bayside become known to be a black neighborhood? Again, if you don't like it, MMOOOVVVEEEE..

auto dealers are always in specific areas. that part of bayside has been zoned for auto dealerships for many years now. just like parts of Jamaica close to Queens blvd, brooklyn in sheepshead bay, northern blvd in the 60's and other areas.

It is absolutely a racial thing. Social engineering has long been a practice of the city planning commission.
Their view is make the "troublesome minority groups, mainly people of color" urged to move and be replaced by middle class "Whites".
There is too much valuable real estate occupied by these "troublesome" people of color that needs to be freed up for development. The way to urge long time residents of color out of their nabes is to hollow them out. Hollowing these nabes out means denying them prime city services. That goes to the north side of Northern Blvd. then city planning makes sure that zoning restrictions are overlooked...like Helms Bros. Interfering with the quiet residential character of a certain section of Bayside...which happens to be an old "Black" community....whatever is left of it now. Mandingo is right on the money. This is a northeast Queens version of the old 1960s credo of, "urban renewal....Black removal". This is incideous and nasty, and it's being done all over NYC. Where overt racism is bad form and too visible, covert racism is running rampant.

Bravo Mandingo! Shine the light on corruption and let the crooked cockroaches scramble for cover.
This man is the real deal. He has been fighting for his community, which includes much more than Bayside , for decades.
Take a good lesson from this grand old community activist. Speak up. Speak loudly. Speak often, until your objective is achieved.
Become a career politician's worst nightmare. Then, we will all be able to enjoy a better quality of life.

The BSA seems to be an equal opportunity crapper when it comes to the outer boroughs. The City is dismantling the few manufacturing areas in the city thru variances and changes in zoning to make room for allegedly affordable housing. In addition to wiping out the few local jobs that are left this causes necessary service facilities to be squeezed in residential areas. Better get used to this unless you don't mind towing your car 20 miles the next time it will not start or driving to Nassau to fill up your tank.

Joe, what is honestly so bad about auto dealerships, except that they might take up inordinate parking off their lot?
--------------------------------
What is so bad is when these businesses, be it dealerships or auto body shops have little respect for the communities they are in and yes, park there cars (many with no plates) on city streets or worse which I see in Jamaica, on sidewalks. They need to keep their inventory on their property, otherwise don't open the business then. It is not like these businesses provide tons of job opportunities and most of the time, people in the community do not even work for them.

So yes, it is a big fucking deal.

That section of Northern Blvd has had countless dealerships on it for more than 50 years. No more now than there were 50 years ago.

In the fifties, Queens Village which was all white, had many dealerships on Jamaica Ave. Now mostly black and the car dealerships are gone.

The amount of car dealerships on northern blvd is actually decreasing. Back in the 80s there were 2x as many car dealerships as there are now. I would rather another car dealership be put up than more chinese shops that refuse to post their signs in English!

I suppose it flew over the heads of some of the geniuses that posted here that every instance cited by Mr. Tshaka was the result of a variance, not as of right zoning. He mentioned the BSA at least 8 times in his letter. He's well past 80 and lived there since he was a kid. He predates the auto shops.

I find it amazing how often the citizens who are supposed to be outraged at the conduct of the city instead defend its actions and tell their fellow neighbors to shut up. I have to wonder if government brainwashing has taken place here in Queens.

What is a variance but zone busting. So in a way it is a matter of zoning. The BSA can override ANY zoning restrictions it wants except where deed restrictions exist which must be enforced privately, usually at great expense. Uh, Helms Bros. Has been one of the chief destroyers of quality of life in the area for decades and decades. It only takes a few Nast arrogant car dealerships to screw up the tranquility of an area. Helms Bros. trolls need not post any further to defend their reputation , which is dismal.

If we are all gonna be that blind to the elephant in the room ? Pretty sure it's not the car dealerships destroying these neighborhoods. But hey, let's look for another excuse to point the finger at.

The issue isn’t the over abundant auto related businesses. The problem is the BSA is the final decision maker. Their decision is final and the community is stuck with it.
THEY SHOULD NOT HAVE THE FINAL SAY AND THE COMMUNITY AFFECTED SILENCED.

Clear Spring is a very nice neighborhood bordered in part by horrible businesses - Helms Bros and Star. They run roughshod over any neighborhood they invade, with impunity and protection of the Community Boards and City agencies. I live in close proximity to the service centers for both these businesses and have fought them for years. All in all I would rather live with their dealerships than the 24 hour operations the sevice centers are. But in reality no one in Bayside, Auburndale or Jamaica should have to put up with their total disregard for the law and their neighbors.

I agree NO ONE should have to put up with any of this stuff. The city agencies refuse to enforce the laws that were meant to protect our communities.

I live in Briarwood, we have a homeless shelter, various drug clinics, etc. I'd rather have car dealerships (which are on Queens Boulevard going towards Hillside and up HIllside Avenue) than the overabundance of hotels being built on Queens Boulevard between Hillside and Jamaica Avenue (so far 3 are being built, and there are three on QB going towards main street) WHY? so they can become homeless shelters. Northern Boulevard (like HIllside) is a commercial district all the way out to Long Island.