College Point being overdeveloped into oblivion 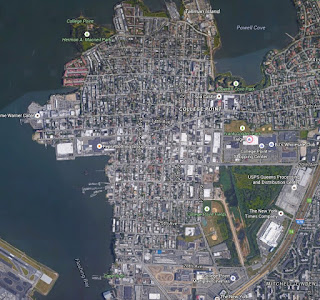 A sign that reads "Rough Road" at the entrance of a new 36-acre police academy in College Point could serve as a metaphor for the neighborhood, not just as a warning to motorists of the many potholed streets laid across former swampland.

"The more development you add to the community, the harder it is to get in and out," said state Sen. Tony Avella, who represents the area. "It's like putting 10 pounds of potatoes in a 5-pound bag—you can only stretch the bag so much. How much more can the College Point community [accommodate] in terms of traffic and congestion?”

Not much, some residents say. On a peninsula cut off from much of the rest of Queens by the 10-lane Whitestone Expressway and accessible only by car or bus, College Point has long had a reputation as a quiet, almost timeless hamlet across Flushing Bay from LaGuardia Airport.

That began to change four years ago, when the city started construction on the $750 million police training academy in the College Point Corporate Park. (The first class of 800 recruits entered in January.) When completed, the complex will feature indoor shooting ranges, training fields, parking and even a 100,000-square-foot mock-up city for practice simulations.

As many as 5,000 visitors will likely stream in and out each day. Such comings and goings—coupled with a Metropolitan Transportation Authority bus depot across 28th Avenue from the academy, an NYPD vehicle impound lot nearby and several industrial plants—could wreak havoc on an already overtaxed infrastructure that has failed to keep up with the accelerating pace of development in recent years.

Adding to the challenge, the area has begun attracting young professionals and growing families eager to be near thriving Flushing—and to pay College Point's cheaper rents. Song Chen, a 35-year-old lawyer who works in Flushing, said he has seen the neighborhood's population skyrocket since he moved in five years ago. He often drives to work because waiting for overcrowded buses takes longer.

Another draw for both tourists and locals in recent years has been Spa Castle, a glitzy complex of pools, hot tubs, fountains and hydrotherapy baths on 11th Avenue in the northern end of the neighborhood.

Chris Androne, who owns a sheet-metal company nearby, said the traffic from the spa can be horrendous. He complains that it often takes him more than 15 minutes to drive three miles to his home in the more posh precincts of Whitestone to the north. His wife, Angie, who runs a lip-gloss manufacturing business above her husband's firm, said traffic has increased appreciably in the past three years alone.

“It's getting worse and worse,” she said, noting that many single-family homes have been converted to house multiple families.
Posted by Queens Crapper at 2:37 AM

All on swamp land. Keep on building. CP will sink into oblivion like Atlantis.

CB7 will approve it all. As long as Chuck Apelian!s cul de sac home is not affected, he will shrug his shoulders and proclaim that this is progress.

They already built on all of the swampland in Bayside, whitestone, beechhurst....It was only a matter of time till the cost of construction dwarfed what a developer could get for the homes. The articles a bit off on a few aspects but I don't see how development of this town can be approved when the infrastructure can never handle it. Never

More important that our idiot mayor is more concerned with free kindergarten than anything else. Dumbass!!!!

I love how people constantly complain about how rents and land costs are too high, and at the same time complain about how single family lots are being converted to multiple dwellings and how the population is going up in affordable neighborhoods.

You can't have both, folks. Not while living in the city.

I grew up in College Point and was proud of the great little place I called home,saw the writing on the wall 15 years ago and moved out,looking back it has truly earned the name
GARBAGE POINT!!!10 more years and it will become GHETTO POINT
Thanks for the memorizes College Point and the great people who once lived there.

"You can't have both, folks. Not while living in the city."

Actually you can. It's megalomaniacal mayors that upzoned the affordable waterfront neighborhoods to appease developers, pushing more people into low rise zones like College Point. This didn't happen naturally.

The only land left is the vacant Flushing Airport. I'm surprised
it still is an Airport, and not a
Housing Development

I mean, I live right around the corner from the Academy. That's not the reason. How about they fix the roads? The potholes and lumps cause massive traffic and damage to cars. Also, what about the giant hotel?
The neighborhood began to change once the movies, Target, BJs came here in the late 90s. Suddenly, more homes were built, multi family ones. They tore down all of the old fashioned ones to make these. Regardless, this is the nature of the beast. Building commercial places will bring in people, etc. yes, it's trafficy and noisy but you cannot blame the Academy. That's just the most recent development. Even though we only have buses, were still very close to the 7 train which is also a lure for people to come here. Rent is high wherever you go in queens.

ps- to call College Point a "hamlet" is quite a hyperbole. It hasn't been that in a long time. It was a former bungalow beach town with factories... 100 years ago, things change.

Eventually Flushing airport will be developed with say 20,000 low income housing units then even whitestone and bayside will fall,then the African Americans will only have the Chinese to blame for all their problems.

Never going to happen. Dream on. Try taking your head out of your butt once in a while.

Anonymous said...
"Eventually Flushing airport will be developed with say 20,000 low income housing units then even whitestone and bayside will fall,then the African Americans will only have the Chinese to blame for all their problems."

I love the way people come here to voice their stupid opinions without paying attention to facts. When I originally advocated for the creation of a blimp port for the site, the property consisted of 78 acres which was reduced to 28 acres due to wetlands protection.

The 28 acres sits in the middle of the protected property. The community has asked for passive recreational use. I doubt if an industrial, retail, or housing project will be accepted. The community, led by Tony Avella, protested Bloomberg's Asian wholesale and warehousing proposal in 2004.

I've been asked by a fellow aviation enthusiast to create a proposal to make the Flushing Airport into a park with some recognition of the site's historical past. I'm thinking aviation museum and perhaps mini golf and other fun things that will benefit the College Point community. Considering all of the development, traffic nightmares, and deteriorating roadways and infrastructure, it's time for this community to get something they'd enjoy without further congestion.

We need to have the LIRR Whitestone Branch revived to better serve the development going up.

Just completing the job of College Point being a shit hole for decades and decades.