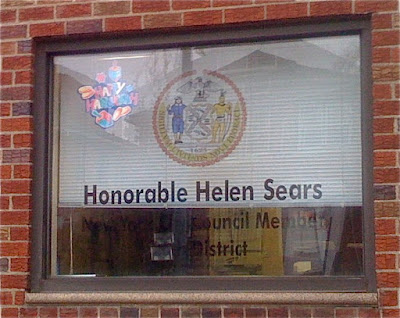 "Helen Sears is so out of touch that she still has a Happy Hanukkah sign in her window on March 28th. The Jackson Heights Times wrote in Thursday's edition that she couldn't make up her mind about what office she was running for. Seems like she is so confused, she can't figure out what time it is." - anonymous

The race in District 25, which includes Corona, Elmhurst, Jackson Heights and Woodside, was in limbo, although Democratic District Leader Daniel Dromm has raised $79,072. It was unclear if Dromm would even face incumbent Councilwoman Helen Sears (D−Jackson Heights), who is remaining coy over what seat she will seek in the upcoming election. Sears had raised $110,623 by March 15.

Well, I haven't taken my Christmas cards off the wall yet.

Why do these Council Members insist on using the word "Honorable" before their names????? There is nothing honorable about their jobs!! That is really annoying to see. Get off your high pedestals Council Members and remember you are "public servants" not Kings and Queens!!!!

You use the appellation "honorable" when you are addressing an elected official or a judge. One does not employ the term to oneself.