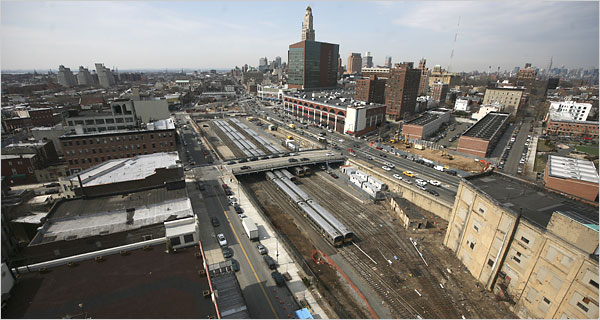 Develop Don't Destroy Brooklyn says, "We told you so."

The opening paragraphs of Charles Bagli's article in the Times show that the Atlantic Yards project is shaping up to be the sham we have always said it would be.

To be very clear: a project that promised so much to the public, that appears now to be an arena (which only makes money for Bruce Ratner) and one tower (maybe), with very little "affordable housing" at all, is a sham. - No Land Grab

“The article makes clear that Atlantic Yards cannot be built as planned, and was never financially feasible. The economic downturn has served to make that crystal clear,” said Develop Don’t Destroy Brooklyn (DDDB) spokesman Daniel Goldstein. “Our elected officials cannot allow our public resources, as well as eminent domain, to be used to construct an arena--which only benefits Bruce Ratner--surrounded by vacant lots. We call on the city and state to work with the community to develop the rail yards in a responsible manner, without destroying the existing neighborhoods in the process.” - DDDB press release

Photo from NY Times
Posted by Queens Crapper at 12:06 AM

"To be very clear: a project that promised so much to the public, that appears now to be an arena (which only makes money for Bruce Ratner) and one tower (maybe), with very little "affordable housing" at all, is a sham."

Did you think it would do anything other than make money for RAT-ner?

If you did you are are sorely mistaken and have been taken for a ride...

Trusting the welfare of our property, to be in the hands of our elected, is a fantastic folly. For how are we to subdue their pleasures? When their nefarious ingenuity and divisive methods of property taking are to be so formidable. Individuals entering into society must give up a share of liberty to preserve the rest. But the surrender of our property to others for their pleasures, of our labors, is not an inclusion into society, rather it is an exclusion from society.Public use now means Private purpose. What a fabulous concept.