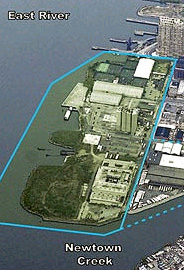 Thirteen months after the Bloomberg administration announced an ambitious plan to remake 24 acres of Long Island City’s waterfront into a haven for middle-income New Yorkers, no money has changed hands – and the proposal’s initial selling point has taken on a far more modest tone.

Hunting for a haven at Queens West

The plan would have in effect reshaped the area, providing for as many as six high rises ranging from 250 to 400 feet tall and, possibly, another four to seven buildings ranging from 40 to 120 feet in height.

If the project is further delayed, it could put a wrinkle in Mayor Michael Bloomberg’s larger affordable housing plans.

“I would like to see the pace pick up,” said New York City Council member Eric Gioia, whose district includes the development. “The city has long promised this area a school and a library. There will also have to be improvements to the 7 line and the addition of water taxis. And, I’m frustrated that it isn’t moving forward.”

But, Eric - what about the lack of firehouses?

While the mayor never officially committed to earmarking a certain number of units to affordable housing, he initially suggested that middle income renters could qualify for all 5,000 units. Bloomberg called it a “landmark moment in affordable housing,” and said it would provide housing for the middle-income earners who are the “real backbone of our city.”

But, the proposal now calls for 40 percent of the apartments to rent at market rate and the remaining 60 percent to be reserved for families of four making between $50,000 to $145,000 a year, with rent set at 25 percent of pre-tax income. In addition to housing, it will also include commercial space, a new school, and up to 10 acres of parkland.

Some predict that the affordable housing component will shrink again before the shovels are in the ground because waterfront land has become so valuable citywide.

“If done correctly, waterfront property like this could be worth a fortune,” said Paul Graziano, an independent planning consultant who has advised several council members. “What will probably happen is that during the next administration, there will be an upturn in real estate, they’ll sell it to the highest bidder and the percentage of affordable housing will shrink.”

He pointed out that other major projects have gone through severe changes before being built. “Battery Park City was supposed to be one-third low income, one-third middle class and one-third luxury and when it all got thrown out the window, no one made a peep,” he said. “The same thing happened in Williamsburg, where they offered incentives to build affordable housing and there’s not a lick being built.”

Oh come on, they wouldn't do that here. This is Queens!
Posted by Queens Crapper at 8:57 AM

But if I have my math down--I learned "cipherin'" from Jethro Bodine--the net effect is that honest-to-goodness Queens citizens were never, never gonna make it in there anyway. It still blows, but let's face facts.

Right but we have been told that we should welcome this as if it will be the answer to all our problems.

After all was said and done.....
I knew that the developers would simply "discover" ,

What did you all think......
that they were going to build
a Camelot for you poor folk ?

Better lay off the "Night Train".....
it's rotting your brain!

These project won't be built folks - low income or luxury. There's a credit crunch - money has dried up completely and developers can't sell what they have in Queens, especially the central Queens CRAP.

To anyone who is moving in NYC -DO NOT USE ATLANTIC GLOBAL TRANSPORTATION MOVERS!!!! We hired them and confirmed them and they never showed up. They just provided us with attitude, ignorance and a level of irresponsibility that I have never experienced!
If you speak to Mike or Victor at this company understand that you are speaking to idiots that are taking up space and really should either be in prison or in an institution because of their blatant lies and stupidity.
Because of their irresponsibiltiy and cowardly behavior we now have to pay double the amount to move because we will be over our time limit for move in at our condo, luckily we were able to hire movers after waiting for 2 hours.....
Again if you are smart and you actually want a company to do what they say -do not hire ATLANTIC GLOBAL TRANSPORTAION MOVERS under any circumstance!!!!!