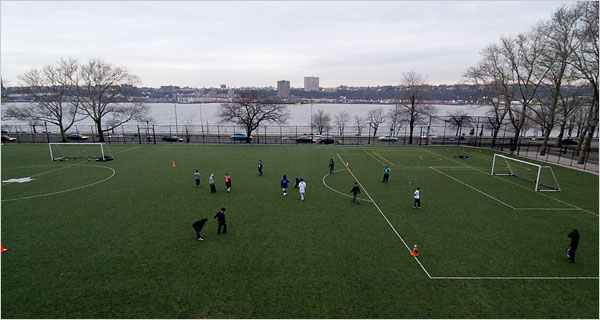 CITY HALL. The debate over the city’s growing use of artificial turf took a surreal turn yesterday, after a watchdog group obtained an internal Parks Dept. memo that seemed to make New York the first city in America to declare a turf moratorium.

“We are suspending the use of rubber infill synthetic turf in all Parks Capital Projects,” said the design directive, dated Jan. 14.

The memo appeared to be a reaction to increasing health concerns over the new breed of artificial turf, which uses rubber pellets from recycled tires. These pellets contain chemicals that have been linked to cancer, birth defects and other problems, yet most studies conclude more research is necessary to determine the possible risks. The city’s Health Dept. is preparing its own report.

But after the memo was revealed by the group NYC Park Advocates, the city replied it had made a mistake.

“I incorrectly made a blanket statement,” said Deputy Commissioner of Capital Projects Amy Freitag. “There is no change in Parks Dept.’s policy on synthetic turf.”

Freitag went on to explain the city is now “replacing” the rubber-infill “standard” and “exploring the use of carpet-style” nylon turf.

When the city’s first turf fields were installed a decade ago, they were carpet style. Since 2002, however, the city has constructed about 70 artificial fields using rubber infill.

Infill became controversial after studies found polycyclic aromatic hydrocarbons, which have been associated with cancer, and phthalates, which have been linked to allergies in children. Last year, the Italian minister of health called infill potentially carcinogenic.

One of the authors of the Jan. 14 memo was Celia Petersen, head of specifications. On July 6, 2006, Petersen received data sheets from turf manufacturer Forever Green; the document was obtained by Metro in a Freedom of Information Law request.

The report noted, “This product contains petroleum oils similar to ones categorized ... as causing skin cancer in mice after prolonged and repeated contact. Any potential hazard can be minimized by using ... protective equipment to avoid skin contact and by washing thoroughly.”

A variation on this last recommendation is now on the Health Dept.’s Web site: “As with any outdoor activity, it is recommended that after using the fields, people wash their hands before eating or drinking.”

While the city has disowned its memo declaring a moratorium on infill turf, the state Legislature is considering two bills that would place a six-month halt on the installation of infill pending a public health study.

Photo from NY Times
Posted by Queens Crapper at 5:31 AM

And how does mayor Dumb-berg
expect NYC residents to continue to have
any degree of faith
in the machinations of our municipal government ?

What other dirty lies and secrets
have been carefully swept under the rug......
or in this case the astro turf ?

Thank you commissioner Benepe ,
for your complicity in this cover up !

You must be getting a lot of "green"
from the installation contractors,
to keep NYC's parks artificially verdant !

P.S.
We haven't forgotten your betrayal
of St. Saviour's !

What a disgrace. I hope and pray that our kids don't get sick.

If it is toxic, do something, make sure it is not used anymore.

Typical. My son plays at McCarren Park on the stuff and I'd really like to know if it is toxic.