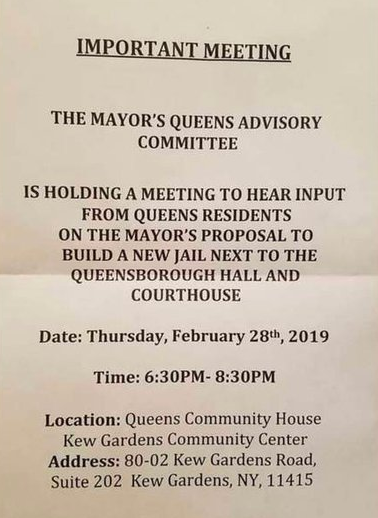 Reporters were banned from a heated meeting in Queens about a much-contested plan to build a new jail in Kew Gardens.


Dozens of Queens residents argued Thursday night with Mayor's Office representatives for more than two hours over the proposed jail, which is one of five possibilities to replace the detention center on Rikers Island, attendees later told Patch.

"They don't seem to get the message," Queens resident Sylvia Hack said. "This is the wrong project for the wrong community."


Patch planned to be one of those attendees, but a spokesperson from the Mayor's Office of Criminal Justice refused to allow our reporter entry, saying it was closed to press. Patch reached out to that spokesperson on Monday for comment.


Several Queens locals expressed their anger that a journalist had been barred from reporting on the plans, which they argue would only worsen mounting congestion near the Queens Criminal Court, Queens Boulevard, the Van Wyck Expressway, Grand Central Parkway and Union Turnpike.

"How did they throw you out? It's a public space," Hack said. "They can't decide any such thing. It's our community center. They had no right to throw you out."

"Something of this scope needs to be a transparent process," added Andrea Crawford, a Kew Gardens resident and member of the jail project's neighborhood advisory committee.
Crawford argued Thursday's meeting, should have been open to the press because local community associations, such as the Community Preservation Committee, had invited others who don't sit on the advisory board.

"It's a demonstration of their trying to prevent light being shed on this very poorly constructed farce that they're engaging the neighborhood," Crawford added.

"A meeting to gather 'input from Queens residents' certainly should be open to the local press," said Patch editor-in-chief Dennis Robaugh. "The only reason to exclude the press is to limit public debate and discussion on an important neighborhood and city issue."

This is basically government repression against the press (Well, the press they don't want or desire, because some reporters were allowed to come in). Also according to the mayor's spokesperson in a pathetic play on semantics, an attempt to repress the general public despite it's claim on the flyer above feigning to desire input from the community about the tower jail.

Then there is this that Maya Kaufman, the Patch reporter that was bounced out of this public meeting, told me about the "neighborhood" advisory committees that were assembled by the city for this and the three other tower jails planned for the other boroughs using the ruse about community participation and transparency:

"Theoretically the NAC meetings are just open to the chosen group, but in Queens we’re seeing community members try to open up the meetings to the community at large by sharing notices on social media. So, this specific meeting had many not on the NAC."


The city is pursuing a unique path to getting approval for the four new jails that will take over housing detainees and inmates when Rikers Island closes: There is one environmental review, and one Uniform Land-Use Review Procedure, for the four very disparate sites.
That could mean that the voices of each individual neighborhood are less audible than they would be if the city proceeded jail by jail. However, the city has created four Neighborhood Advisory Councils to create a forum for getting community input into the plans for each facility.

City records are not crystal clear on whether people attending these meetings are NAC members or non-members there to observer or speaker.

These are the individuals selected to advise (or advocate) for the Kew Gardens tower jail:

You think after the Amazon HQ2 debacle, Mayor de Blasio would have learned a lesson about keeping citizens in the dark about their policies and plans for neighborhoods. But as with the bike lanes and homeless shelters that have been induced on eastern Queens, this has been standard operating procedure.

I wonder how many people opposed to the jail voted for dum Blasio twice? How many votes for Karen K? How many stayed home? Elections have consequences.

A spokesman for the Mayor banned the press? I hope the people of NYC know what to do about that outrage! America is the last nation on the face of this Earth and the Democrats ban them from a public meeting. When are you folks gonna wake up?

Park Slope would be the ideal location for one of the new jails.

Why the hell not? Why wasn't the community informed and invited to this?

What's happening throughout this city becoming readily apparent now that this mayor is in his final term and so has no need to hide his true agenda.

He's a committed socialist/leftist and I mean this in the true sense, where his core beliefs are that of a Maoist form of Marxism where the "revolution" is led by the peasantry. In this city, that means the jailed, the homeless, the mentally ill.

If you voted this in, shame on you for bringing us one step closer to Baltimore, Chicago and Detroit. Shame on you for thinking that voting Democrat would somehow improve this city. In the end, it was all vanity on your part.

If you didn't vote this in, at least you have the dubious consolation of knowing that you have been right all along.

Guess the Mayor is afraid of non-fake news.

The secret to citizen success here is not the MAN but the PARTY. If you want to change the attitude of elected politicians, then vote for the opposite party in power. In this particular case, get rid of the Democrats. If the Republicans turn against New Yorkers, then vote for Independents or Libertarians or whatever. You must dump the unresponsive party in power. The Democrats will just replace DiBlasio with another do nothing when he's gone. By doing this (party dumping) consistently you will disrupt their donors and they will lose money. That's what political parties are in business for, making money for themselves, not helping YOU. But YOU can't do it. So get used to it!

I'm amazed, I must say. Rarely do I encounter a blog that's equally educative and amusing, and
let me tell you, you've hit the nail on the head. The problem is something too few people are speaking intelligently about.

Now i'm very happy that I found this during my hunt for something relating to this.

Queens judge John S. Lansden Evicted a Vietnam war Expert veteran because he did not believe the guardian that was appointed had an emergency. The alleged new owners were featured in Queens Crap 2015 Kenyem Morotov & Erick was arrested previously for illegally doing the same to this family. D.A. Katz office would not take the report. Case number 64118.18. Even the attorney was Shocked. In Supreme court Shapiro Di.Caro & Barak in wrongful foreclosure the judge allowed paperwork to be submitted stating they represented the Plaintiff. We talk about homelessness in New York. Fraud upon the Court is Allowed to confiscate a property. Please Help this Veteran Please someone. We are Better than this.