NYS Pavilion getting some love from the Feds 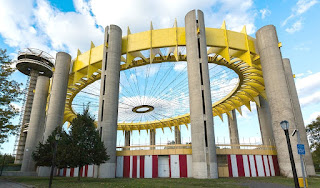 The restoration effort of the New York State Pavilion at Flushing Meadows Corona Park will receive more than $16 million in federal funding, according to U.S. Sens. Charles Schumer and Kirsten Gillibrand.

As announced on Nov. 26, the cash infusion will be used to repair and replace several electrical units at the World’s Fair Park and other areas which were severely damaged during Hurricane Sandy in 2012.

“The World’s Fair Pavilion is an enduring icon and it should be preserved and promoted for current and future generations,” Schumer said. “Now the pavilion is being restored and these federal funds will be used to repair damaged caused by Superstorm Sandy and help yet another community asset recover after the storm.”

The $16,468,030 grant was provided by the Federal Emergency Management Agency to the New York Office of Management and Budget and will be used for repairs at the pavilion as well other storm-damaged areas of the park.
Posted by Queens Crapper at 8:59 AM

Nothing will be built because they will spend the majority on a study to determine how best to restore it. The money will go to some firm with ties to Cuomo or one of his cabinet members and we will be back to square one because no one will be in agreement. THIS HAS HAPPENED BEFORE.

Whoopdie shit. This is what Schmuck "the cuck" Chumer and Ditzy Kristie lobbied restoration funds for, some relic from a park festival 50 years ago. NYCHA could have used this friggin money. This money could have went to small businesses that are under threat or have already gone. This could have went to the few hospitals we have left.

Since they cited Sandy for this bullshit, this money could have went to jettys that have still not been rebuilt and groynes that were never built on the shores of Rockaway Beach

But it's more important to have a pretty sight to see and for instagram posts.

What does the Pavilion actually "do"? What is its function?

Trying to spend money for the year so next years budget doesn't get reduced!

Can't these idiots save the taxpayer a dime?

Isn't there something worthwhile to spend that money on if you HAVE to spend it?

The NYS Pavilion was an abandoned relic for decades BEFORE Sandy ever hit!

Why throw our money at it now?

Godless George is on to something. I recall going to the Fair with the wide-eyed enthusiasm of a pre-Internet 10 year old. Oh, wow! The New York State Pavilion! My home state. Uhh, what is it? Oh, it's a map on the floor. What else is there. Nothing, really? This big weird building with nothing in it? Remarkable that it's still there.... and it's still ugly. Who cares? Wouldn't the public be better served with no building and more parkland - FMP is way overcrowded.

What are they talking about, there are no transformers or wiring in the east vaults by the bridge. The NYS Pavilion has no vaults at all, it gets its power from a breaker panel inside the theater. The tower, stairs electrical conduits and light fixtures need replacing to restore it. --time and neglect is what ruined all those components NOT SANDY
They are telling us some bullshit shill or don't know what they are talking about. I bet they plan divert most of all that funding, and the NYS Pavilions get near nothing!

I bet the new transformer vaults are for the USTA so the mayor, corporates and tennis idiot's can enjoy more private air conditioned booths and perks.
Another crock of shit being spoon-fed to the public under the guise of a gourmet meal.

In the almost sixty years since the fair, it has been used as a urinal.

"Sandy" is turning into what seems to have happened to the 9-11related disease funds --a boondoggle and pork barrel.

Nearly all the real damage from that storm occurred at shoreline or in the underground tunnels in lower Manhattan which flooded. The wind and rain were NBD.

Sixteen million ought to be enough to actually DO SOMETHING with that facility beyond just patching it up. I guess the idea is "it's nobody's money ..so dig-in".

Recently there was a contest for designs for transforming it into a useful purpose,what ever became of that? It would be nice if the tower could be accessed and give people a view of the city.I got to go up on the elevator during the World's Fair for the view but maybe the stairs could be restored till the elevator was fixed,if ever.
For all those that think it should be torn down I would say saving historical structures are worth saving.People travel thousands of miles to see ancient ruins in Italy,Greece,Israel,Peru etc.It was the same attitude that tore down the Aquacade from the 1939 fair.I think the Aquacade with seating for 10,000 people and a large pool would have been a nice attraction in the park for concerts and other events.Look what replaced it,a few benches and a snack bar.
There really is no place in the park for outdoor concerts and other events.I would like to see the beautiful stained roof panels restored too.I remember the rock concerts there and saw Led Zeppelin,Grateful Dead,Steppenwolf and many more groups that played there.Jerry Garcia even commented that it was one of his favorite places to play and said he loved the stained glass roof.Save the NYS Pavilion

Wind and rain were NDB?
Whats NDB? English for us older people please?

"There really is no place in the park for outdoor concerts"
KISS want to do their last concert in the park someplace in September but some people are against it.

Put the $$$ toward fixing our crappy parks... Starting with FMCP.

Yes there is plenty lawn space for large concerts but np place for smaller events.

>There really is no place in the park for outdoor concerts and other events.

Kool & the Gang and Paul Simon both played at FMCP last summer.

Yep, another $500K for the 4th or so "study"
By the time that study's is concluded the money will be gone.

The city already had several study's done and was told what needs to be done ---which is stabilization of perimeter wall, roof cables, tower steps, sandblast & paint tower tops first so people can work on it safely.
The map really cant be saved and needs to be out of the way to start.

The city's been told the exact same shit with every study and did nothing because they keep hoping it will fail so it can get "get over" on a state paid for emergency demolition. (state money)
Those 200 watt LED "party spots" from the ground up they tried are a joke and did near nothing to light it up. That LED floodlight (pale wash) hardly works on the Kosciusko bridge
The rusted fixtures on the structure need to be replaced with LED Globes.
--Jackasses, dopes & weasels all of them, good luck to Melinda Katz in dealing with em to actually see any of that so called restoration funding.
--Watch them call for a study then stall for another 5-8 years

Would be many of quality concerts in the park if the dam city would get Live Nation and Founders Entertainment out of the picture.
These racketeers not only set the prices for "the buyer" but also prevent all the artists under there wings from playing anyplace, park, shed, shell outside (usually) 60-100 miles of major venue they control and have locked up.

The common denominator of all forms of pay to play is that both the buyer and artist must pay to "get in the game" in some form or conversion. Usually through a 3rd party indie or promoter.

Well, you could have fooled me! And for that matter, any other New Yorker who has the ability to think.
Finally, judging on what goes on in Washington, D.C., that law doesn't matter.
To keep up appearances, only those outside the 1% are judged and jailed.
Further, it will always be so.

In 2001 Create Architecture Planning and Design proposed restoring the NYSP into a really cool looking air and space museum.
Check it out here
The proposal was refused by Claire Shulman IIRC.

The few terrazzo map tiles that were taken out and restored and after display were stored in a pile in a side room inside the tent of tomorrow and left to rot. The remainder has been left in place and buried under plastic sheets and dirt ostensibly to preserve it for when future archeologists come along and dig it up. Perhaps in the year 6938 or 6964 when the Westinghouse time capsules are scheduled to be dug up.