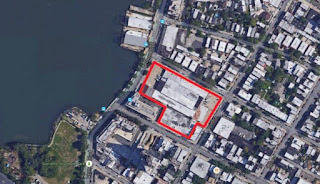 Cape Advisors and Wainbridge Capital secured a $65 million loan to fund their purchase of a waterfront development site in Astoria.

The site at 30-77 Vernon Boulevard spans about 522,000 square feet. Cape Advisors and Wainbridge are planning a luxury five-building residential project with 770 affordable and market-rate apartments. Amenities include lounges, a rooftop deck and a fitness center.
Posted by Queens Crapper at 12:46 AM

WTF else do they expect in ASS-toria...,low rise development?
C'mon it's a crap hole of overdevelopment. Nobody's going to turn the clock back.
Learn to live with it or move.
It's not that I'm not sympathetic to the subject. It's more of a question of reality.

Its about time garbage like this happens above Astoria Blvd.

Also, cannot think a few blocks of people are standing in the way of transportation to LaGuardia - and we have to waste millions and hours of commute time with all the proposals now being considered.

>Also, cannot think a few blocks of people are standing in the way of transportation to LaGuardia - and we have to waste millions and hours of commute time with all the proposals now being considered.

Ever hear of Vallonia?

That crowd is costing the city millions in misallocted resources from the glut of trains going to Ditmars, while the rest of Queens travels in cattle cars, to about half dozen blocks that don't want the train to LaGuardia forcing millions to go way out of their way and billions in wasted money for a roundabout spur.

While on the community board they control, 2 story buildings are fine for them while they vote 10 story for the rest of their community.

Do some posters just see the words "big" and "development" and immediately start frothing at the mouth?

At least READ the damned article, you don't even hafta pull up ACRIS or look it up on the DOB site.

It's an F9 building class, originally for Industrial/Mfr-ing usage. That purpose have run its course, a large residential tower makes the most sense there now.

What, you think someone's gonna shell out millions for 118,000 square feet and then charitably go build some single family detached homes? The waterfront of Vernon boulevard was NEVER zoned like a residential side street.

To look at context and at least try to make an intelligent counter-argument: only residents who can really gripe here are those in the semi-attached duplexes one block over, along 30th drive (https://goo.gl/maps/CE1cLXxUFEr).

To that end, they should probably get involved with the developers/CB/local Councilperson early on and ensure their own access to their street-side parking/driveways etc remain open and convenient; beyond that, they're gonna suffer a lack of light, and the usual attendant issues of crowding/unpleasant densification, but what else is new.