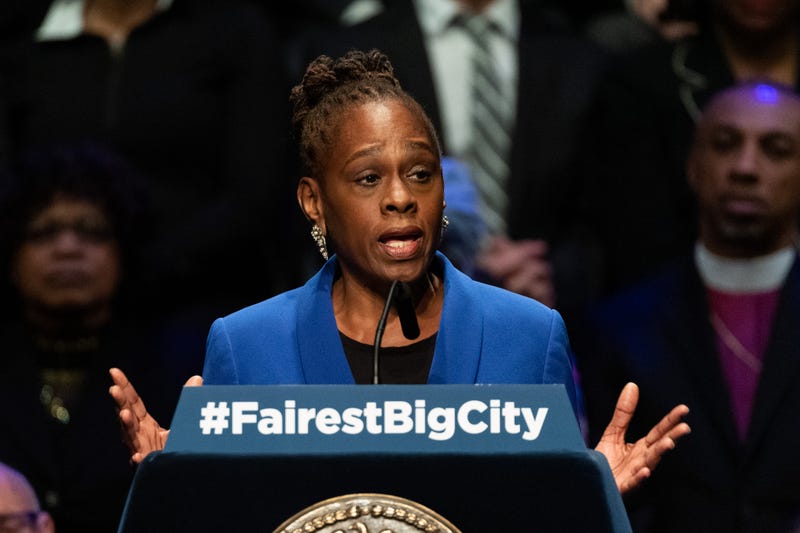 A Brooklyn nurse says he repeatedly tried to warn city First Lady Chirlane McCray about the devastating effect of reassigning psych wards to be used for COVID-19 patients — only to be ignored by her billion-dollar mental-health initiative.

Irving Campbell, a psychiatric nurse at NewYork-Presbyterian Brooklyn Methodist, told The Post he watched his 50-bed ward close in March to treat people with COVID-19 — leaving at least some of the hospital’s former mental patients on the street, rooting around in the trash nearby.

“My intention of reaching out was to get the support of the mayor and first lady in keeping these inpatient psychiatric beds available to the community,’’ Campbell wrote in an e-mail to a counselor with McCray’s embattled $1.25 billion mental-health group ThriveNYC in late July.

The counselor blew him off.

“I am unable to provide you with a way that you can speak directly with the Mayor or Ms. McCray,” the counselor wrote — although she suggested Campbell “continue to speak out about a need you see in your community,” according to a copy of their exchange.

Campbell then tried to reach ThriveNYC on social media and sent a letter to the mayor but got no response.

New York has lost 400 psych beds to coronavirus patients in private hospitals statewide since the pandemic broke out.

About 100 of those beds were in New York City. They included the 50 spaces at Campbell’s hospital, as well as 34 at Presbyterian’s Allen Pavilion in Upper Manhattan and 20 at Northwell Health’s Syosset Hospital on Long Island.

Campbell, who is active with the New York State Nurses Association, said that while state hospitalizations for the virus have plummeted, his unit has yet to reopen — and his union suspects this is because the hospital’s mental-health patients were largely poor, and other health-care issues generate as much as 70 times their related payments.

No worries. They earn votes the old fashion way - by stealing.

Cash-strapped huh? How is that you Marxist?

Corruption - that's how. Your ideology failed long time ago.

"New Deal" is nothing, but repackaged garbage totalitarian ideas and dogmas.

Bernie boy, you need to go away as well.

You represent nothing this great country stands for.

You are a communist piece of garbage with your little girls and boys.

SHOCKING. I tell you SHOCKING!!!!!

The "first lady" (ha!) is vastly unqualified by virtue of education or experience to be heading a nearly ONE BILLION DOLLAR public project. DimblASSio only put her in charge to gain her name recognition for an eventual run for mayor herself. These two don't seem to realize that public office in NYC is supposed to be a position of responsibility to serve the people, not to line their own pockets. And this wasn't the first time he handed over public funds to be distributed at this GRIFTER'S discretion, mostly to gay causes. She also has a personal staff of 14 people, paid with TWO MILLION of YOUR money. What does an unelected piece of nothing like her need a staff of 14 for? And then her hubby whines about having no money, wanting the senile China-bought Biden elected so he could bail out the mess DimblASSio got NYC into. These two thieves should be thrown into jail and an honest mayor found, somewhere. Look at the mess DimblASSio's commie LaRaza schools chancellor has made of the city schools--they're just indoctrination centers for commie thought, with subjects like algebra, science, and English pushed to the side. Look at his other officials, bailing for positions in other states as fast as they can. Or maybe you are unable to bring yourself to look at the nauseating mess DimblASSio has made of NYC. He was elected because of vast voter apathy, with only about 21% of eligible voters bothering themselves to go to the polls--TWICE. Elections have consequences, folks. If you're that stupid as to throw your vote away once again for a pack of "progressive" commies who hate America and want to tax you into oblivion, bow down to foreign masters who bought them off, and lose the sovereignty of your own country, go right ahead. For now, that's your right. If you vote in another gaggle of these criminals, likely it won't be in the future.

Spent my whole life a “democrat”, just voted Republican down the ballot !

Her and her old man should be wearing orange jumpsuits.

Spent my whole life a “democrat”, just voted Republican down the ballot !


Thank you. And welcome to the world of sanity.

Wow-the idiot mayor and his harpy, er, wife are quite reminiscent of another commie couple-Romania's Ceausescus.

May they meet a similar, richly deserved fate one day!

This state/city has been democrat way too long. Look at this when do you ever see store fronts boarded up for the election outcome? We need a change big time in this state/city. You think Macy’s and New Year’s Eve celebration is big wait till the mayor and co mayor are out! The five boroughs will be celebrating big time.

I also just voted Republican down the ballot, the hostility at anybody wearing decent clothes it was like being in a war zone.
--fuck all these communists, terrorists and nutters that call themselves democrats.
Now, I have to find a good parking space, get my fire extinguisher and personal home protection ready for when the riot starts.
No matter who wins the other side will claim it was "rigged"

Big trouble is coming between now and inauguration day

Why should she, you folks are just gonna elect Big Bird again.

I also just voted Republican down the ballot, the hostility at anybody wearing decent clothes it was like being in a war zone.


Makes no difference pal. The fraud was set up way before election night. Pelosi was confident. Very confident. Want to see who voted in my name. They are screwed!