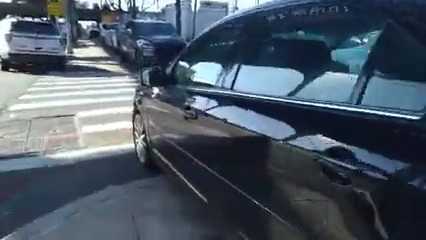 The 106th Precinct in Ozone Park, Queens is egregiously obstructing commuting public space on both sides of the street with police vehicles and their cars, notably on top of a handicap cut curb ramp. by a public park named after a cop who died in the line of duty. The cop the park was memorialized for, Officer Nicholas Demutiis, got killed trying to stop a car thief that ran him over on that same block.

This falls in line with what the NYPD has been doing at their other precincts as they turn the areas around their taxpayer funded buildings into makeshift fortresses, especially with all the frequent protests that has occurred in the last five months along with a majority of citizens calling for defunding and abolishing of the police and the budget cuts that followed in July. A recent incident that got some viral attention involved a reporter from bike advocate news site Streetsblog who got stopped, questioned and also threatened for arrest when she exposed the NYPD using a playground as parking lot for their vehicles (with permission by the NYC Parks dept).

But the 106th truly stands out for their brazen territoriality of public space. And to show that their annexing of sidewalks isn’t a new thing, this precinct has been parking vehicles on this sidewalk and the one across the street for quite a while now.

Now it's clear why auto body shops and car dealers have been getting away with curbstoning all these years.

@JQ: "...along with a majority of citizens calling for defunding and abolishing of the police ..."

Tens of thousands of people marching in the streets for a week which continued for the last 5 months. Also gotta add consistent harping about it from an equal amount of social media accounts. Plus going by the endless harping and fear mongering on this comment page about a socialist takeover of the city.

It was enough to influence city council to actually do reallocate funding that led to less recruiting and the termination of a precinct in St. Albans, which I also point out in my post. Which was not an endorsement of those policy decisions, since south queens continues to get under-served.

Please. Tens of thousands of people??? You see middle-aged or senior citizens hitting the streets? A "majority"? Nah. Just disaffected under-30 yoots.

Maybe if people would stop vandalizing and cutting the brake lines on the personal and police cars they wouldn't have to take over the streets and shut them down.

But I agree the cars shouldn't be all over the sidewalk. The city should get the money to expand the parking lots at precints so this is not a problem anymore.

Give me a damn break. This has been going on for as long as I can remember, and now theyre talking about it? Seeing as the patrol guide expressly forbids this, it should be a non issue.

Yes, the paid army. Antifa/BLM. They want to defund the police. So is not the people.
In a country of 330 million, tens of thousand mean nothing.

However I do agree with the article, police should lead by example, no red light running, no stop sign running and no parking all over the place.

Here is one of the "tens of thousands of people"

Where does one get a flamethrower? Walmart? Amazon? eBay?

They need those cars. Where else are they going to spend their whole "workday" staring at their phones? Maybe if some of them learned how to walk, they may find it useful. What a waste of taxpayer money these people are. Lazy, stupid and overpaid socialists.

JQ you are on the wrong side of this trying to tie it to Defund the Police BS !

JQ you are on the wrong side of this trying to tie it to Defund the Police BS !

Give credit where credit is due. JQ is staying objective. Don't blame the messenger.
Is up to the people to expose this massive FRAUD supported by globalist scum.

This has been going on since the beginning of time around police stations, fire houses and schools and will never change. Some people will always feel entitled because their job is so important. How about walking a few blocks like the rest of us slobs or take public transportation. Yeah right.

"Give credit where credit is due" Yes that's why the House is flippling seats !

Yes that's why the House is flippling seats

no, that's not why. they were so busy cheating they forgot the rest of the folks on the ballots. is simple as that.

Stupid is as stupid does.